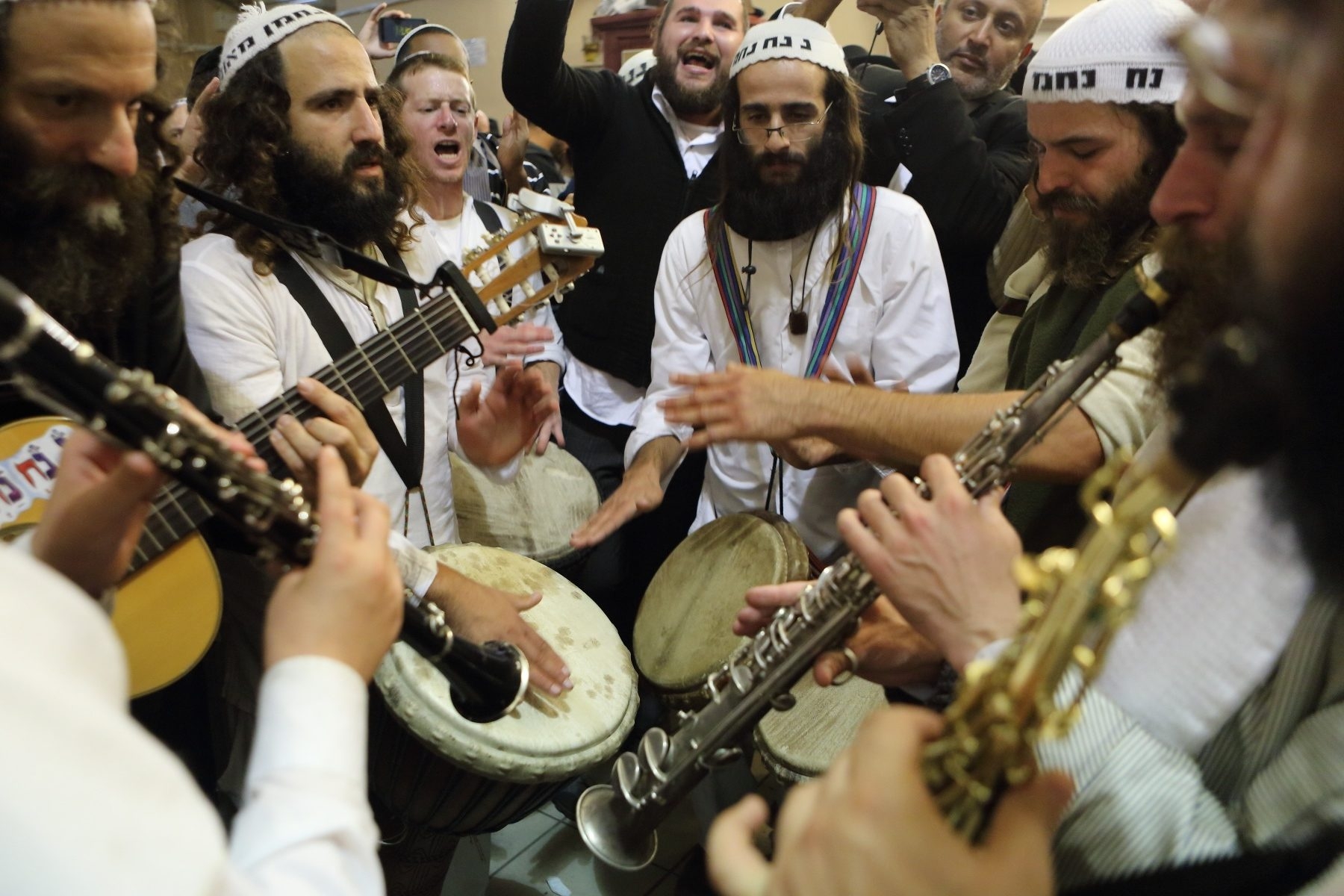 UMAN, Ukraine (JTA) — Eight days after he was born in Israel, Yossi Galant’s youngest son was already 2,000 miles from home, undergoing a circumcision near a rabbi’s grave amid a mass of Jewish men engaged in euphoric prayer.

Held last month on the eve of Rosh Hashanah, the brit milah ceremony coincided with the peak of the annual fall pilgrimage to the grave of Reb Nachman, the founder of the Breslov hasidic movement.

“It was a very moving event that will help him later in life as he stands to be judged by God,” Galant told JTA.

At least four newborns were circumcised near Nachman’s grave this year, part of what experts say is a rash of new customs developed by followers of the rabbi in connection to the site.

In addition to the yearly influx of worshipers who come to spend the High Holidays here, this central Ukrainian city has become a destination for Breslov honeymooners and troubled young men. Women have started prayer groups at the grave and begun to perform the commandment of separating dough during challah-making there.

But it is the practice of circumcising 8-day-old boys that has commanded the most attention and drawn intense criticism from medical professionals and rabbis. They are concerned that it needlessly endangers the newborns and draws unhelpful scrutiny to a religious rite already under fire across Europe.

“This new gimmick goes against halachah [Jewish law] and is contemptuous of the mitzvah of milah [circumcision] as well as the sanctity of human life,” said Rabbi Avi Zarki, a well-known radio talk show host and ritual circumciser from Tel Aviv.

The trend “is happening as people in Europe are already searching for reasons to fight circumcision,” he said.

Yaakov Dov Bleich, a chief rabbi of Ukraine, also had few positive things to say about the trend.

“I don’t understand why people would bring a baby to a rabbi’s grave for brit milah,” Bleich said. “It’s just bizarre.”

Observers say the circumcisions began about two years ago and are a result of an overall growth in travelers to Uman, a city of about 85,000 that is flooded annually with some 25,000 pilgrims — mostly men from Israel and the United States.

Followers of Nachman, who died childless in 1810 at the age of 38, have traveled here for more than a century. But following the collapse of the Iron Curtain 23 years ago and subsequent improvements to local infrastructure, the pilgrimage has turned from a trickle of diehards into a flood of Jews from all denominations.

One of those ways is by bringing newborns to be circumcised.

Jewish men performing the tashlich ceremony near the grave of Rebbe Nachman of Breslov.

Galant’s son was circumcised in the Kloiz Synagogue here while lying on a replica of Nachman’s chair. The following day, Galant’s cousin, Yisrael Meir Yegudayev, saw his boy circumcised near the gravesite.

“I wasn’t worried at all,” Galant said. “There are good medical services these days in Uman.”

Not everyone agrees. Galina Borisovna, who heads Uman’s pediatric clinic — an apartment-size space that looks like the set of a 1950s film — said it was foolish to circumcise a child in Uman, where the nearest modern hospital is 200 miles away.

“You would have to be crazy just to bring a week-old baby to this place with tens of thousands people around, let alone circumcise him in unsanitary conditions,” Borisovna said. “It exposes the child to all sort of diseases and I strongly advise against it.”

But Nicolay Vasilyevitch, a surgeon at Uman’s hospital, said the risks are exaggerated. During the week of Rosh Hashanah, the Breslov movement runs a round-the-clock clinic that is capable of providing initial treatment for emergencies and handling minor injuries.

“Circumcision is a minor procedure and we have the tools to deal with any complications right here, not to mention that the hasidim have their own medical services, which are quite good,” Vasilyevitch said.

The circumcisions are just one of a number of new phenomena that have sprung up in Uman in recent years.

Chaim Hizin, an Israeli who is among a handful of Breslovers who live permanently in Uman, says the city has become a destination for honeymooning couples.

“Thanks to the permanent hasidic presence at Uman, they have kosher food and a community, but they can still be alone together in a place which is full of spiritual significance to them,” Hizin said.

Women, though still a minority during pilgrimages, have begun recently to assert their own rituals, performing hafrashat challah — the act of separating a piece of dough during bread baking — on the grave.

“It has turned into a ceremony of feminist empowerment not only for Breslovers but across the haredi world,” Mark said. “In a way, Uman has become for some haredis what India is for secular Israelis — a place to escape real life with all its stressfulness for a while and rediscover spirituality through a host of rituals.”