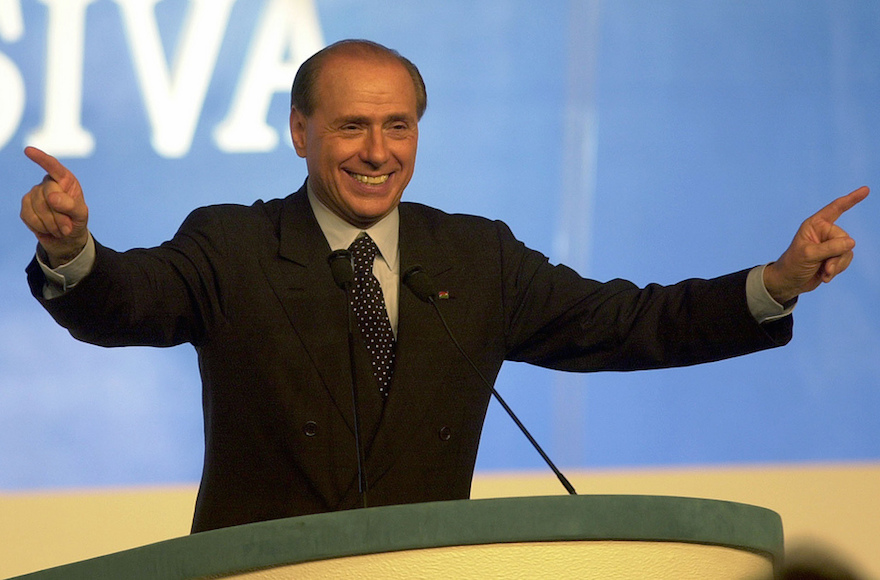 In an excerpt of a book to be released Friday, the eve of the 75th anniversary of Kristallnacht, Berlusconi was quoted Wednesday as saying that because of the long series of court cases against him, “my children say they feel like Jewish families must have felt during the Hitler regime. Truly everyone is against us.”

Berlusconi, 77, was convicted of tax fraud earlier this year after a long series of other charges and legal woes.

Italian Jewish leaders reacted with shock and anger to the comparison. A photo montage made the rounds of Facebook showing a picture of his family alongside a picture of concentration camp inmates.

“The life of the Jews of Europe under Nazism was marked by a black vortex of violence, persecution and death,” Renzo Gattegna, the president of the Union of Italian Jewish Communities, said in a statement. ”Any comparison with the situation of the Berlusconi family is thus not only inappropriate and unacceptable but is also an offense against the memory of those who were deprived of any rights and, after atrocious and unspeakable suffering, their very lives.”

Nichi Vendola, a leader of the left-center opposition, wrote on his Facebook page, “To trivialize a terrible tragedy like the Holocaust for everyday political polemics, as Berlusconi has, is chilling.”

Emanuele Fiano, a Jewish member of Parliament and a political opponent of Berlusconi, called the statement “an insult to history, to the six million Jews who were killed, and to those who try to impede history from being forgotten or manipulated.”

Berlusconi responded in a statement on the website of his Forza Italia party, calling the furor over his remarks “a controversy blatantly instrumental, based on a phrase extrapolated from a broader context.” He added,  “My history, my friendship toward Israel, my consistent government action at the international level in favor of the State of Israel, do not allow any doubt about my awareness of the tragedy of  the Holocaust and my respect for the Jewish people. ”

Abraham Foxman, national director of the Anti-Defamation League and a Holocaust survivor, told Berlusconi in a personal letter on Wednesday that he failed to teach his children the “lessons of their history.”

“As badly as they feel you are being treated by the courts and by Italian society,  your problems cannot at all be compared to the tragedy that befell the Jews at the hands of the genocidal Nazis,” Foxman wrote.

“It is painful for me to discover that your children have never really learned the lesson of the Nazi genocide of the Jewish people, and I urge you, in friendship and out of deep respect, to begin to teach them,” the letter concluded.