At G.A., Peres and Netanyahu strike different tones on Iran 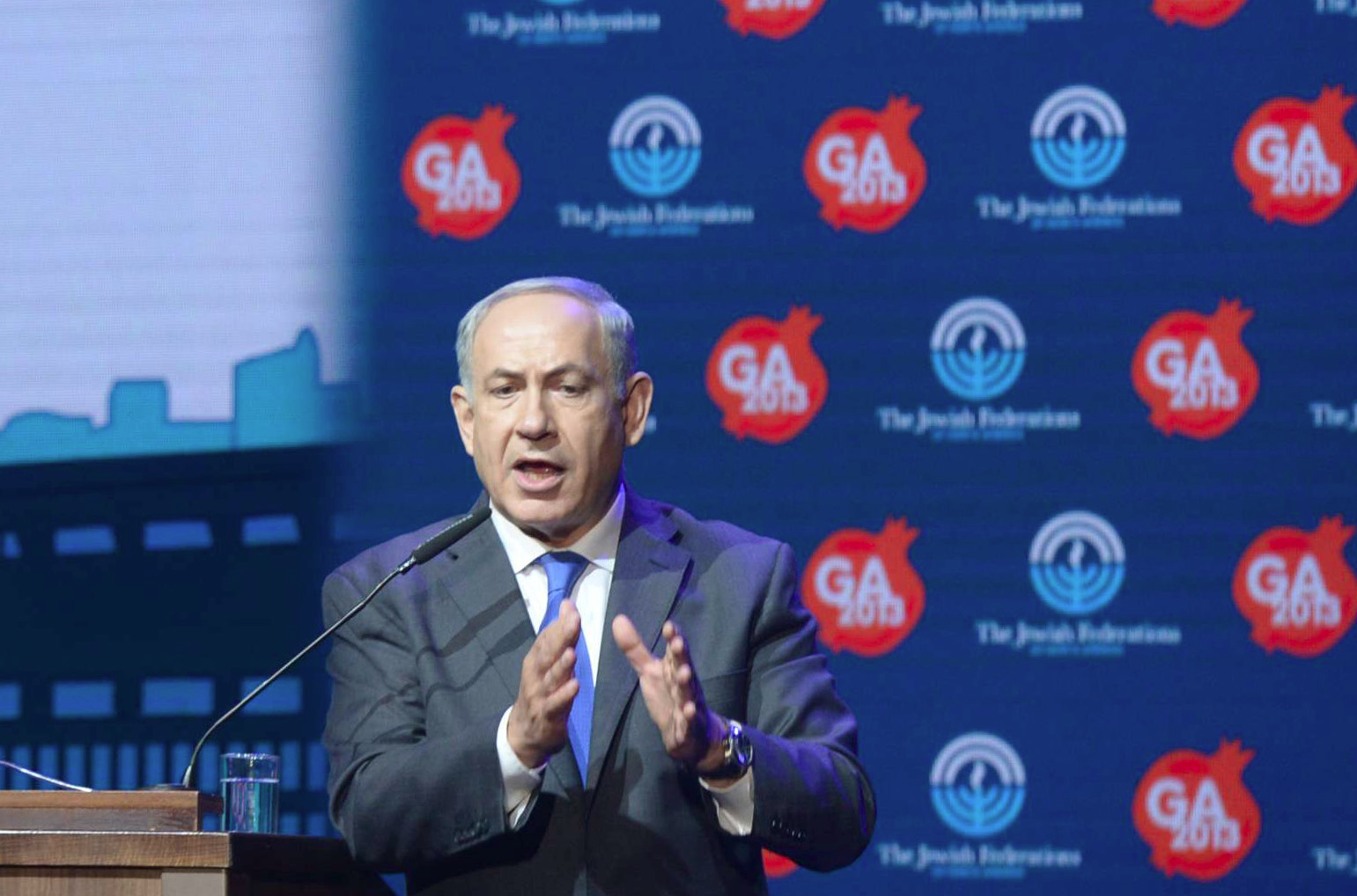 JERUSALEM (JTA) — Israeli Prime Minister Benjamin Netanyahu continued his hard line against Iran’s nuclear program in an address to the Jewish Federations of North America General Assembly, repeatedly telling the gathering of American Jewish leaders in Jerusalem that the compromise being formulated is a “bad deal.”

“What is being proposed now is a deal in which Iran retains all of that capacity” to build a nuclear weapon, Netanyahu said Sunday. “Not one centrifuge is dismantled; not one. Iran gets to keep tons of low enriched uranium.”

Netanyahu’s comments came as negotiations between Iran and Western powers failed over the weekend to reach an agreement that would ease sanctions in return for the Islamic Republic freezing its nuclear program for six months.

Netanyahu said he would continue to criticize such an agreement and called on his audience to join him in advocating against it. Later he suggested that Iran has plans to attack the United States.

The prime minister’s sharp comments underscored what some perceive as a widening gulf between Israel and the United States on the Iranian issue — speculation that Israeli President Shimon Peres sought to downplay in his address to a plenary session at the G.A. on Monday.

U.S. Ambassador to Israel Dan Shapiro, who also addressed the Monday plenary, took a similar line, emphasizing that the alliance between the two countries is “as close as it has ever been.”

In his speech Sunday, Netanyahu repeated his demand that in order for Israel to reach a peace deal with the Palestinians, the Palestinian leadership must recognize Israel as a Jewish state. He also called for a continued strong bond between Israel and the North American Jewish community.

“When it comes to Jewish survival and the survival of the Jewish state, I will not be silenced, ever,” he said to loud cheers from the crowd. “We are the Jewish state. We are charged with defending ourselves and speaking up. All of us, all of us, have to stand up and speak up.”

Netanyahu also said that Israel must have “robust security arrangements” in order to be confident that a peace with the Palestinians will last, and referred to Jerusalem as Israel’s “undivided capital.” The Palestinians claim the eastern half of the city as their capital and have slammed recent Israel announcements of building in the West Bank and eastern Jerusalem, as have the United States and others.

“The minimum thing we can demand is that the official position of the Palestinian leadership recognizes the Jewish state,” Netanyahu said. “This will be a long process but it must begin with that.”

At the end of the speech, Netanyahu praised the strong relationship between Israel and the U.S. and Canadian Jewish communities. He noted his government’s efforts to reach a compromise between feuding factions at the Western Wall, long a high priority of American Jewish leaders.

“The Kotel is in Israel, but the Kotel belongs to all the Jewish people,” Netanyahu said, using the Hebrew term for the wall. “We have to consult together and reach a solution together.”

Netanyahu appeared relaxed during the speech, cracking jokes, leaning on the podium and calling out audience members by name. And conference delegates speaking before Netanyahu echoed his speech’s main points, especially on Iran.

Speaking at a reception for the Ruderman Family Foundation before Netanyahu’s speech, former Netanyahu adviser Dore Gold called for the Jewish people “to unite on this issue of Iran.”

On Sunday morning, at the start of the Cabinet meeting, Netanyahu called the deal on the table between the world powers and Iran “bad and dangerous.”

“It is dangerous not just for us, it is also dangerous for them [the world powers],” he said.