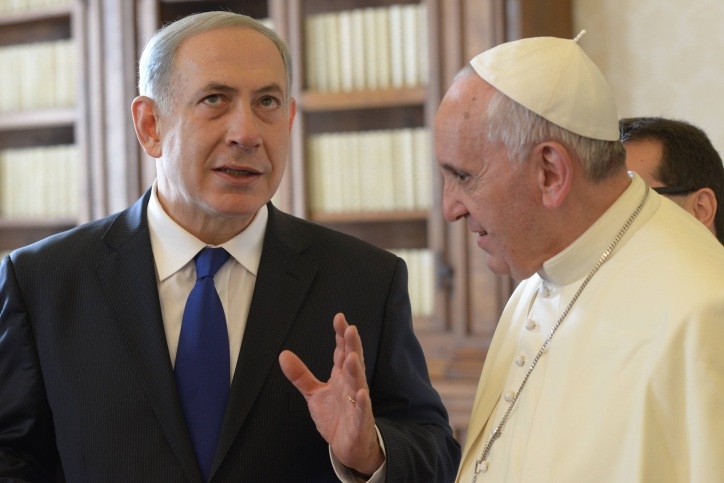 (JTA) – Israeli Prime Minister Benjamin Netanyahu and Pope Francis in their first face-to-face meeting talked about the Middle East and plans for a papal trip to Israel, among other issues.

Also at Monday’s closed-door, 25-minute audience at the Vatican, Netanyahu presented the pope with a book about the Spanish Inquisition written by his father, the late historian Benzion Netanyahu.  The dedication read, “To the great pastor and guardian of our common heritage.”

The Vatican said in a statement that the talks focused on the “complex political and social situation in the Middle East, with particular reference to the reinstatement of negotiations between Israelis and Palestinians, expressing hope that a just and lasting solution respecting the rights of both parties may be reached as soon as possible.”

During the meeting, Netanyahu reiterated the invitation to the pope to visit Israel that was extended earlier by Israeli leaders. Media have reported that the pope may make the trip in late May, but Vatican spokesman Father Federico Lombardi said no date for such a visit had been set.

Netanyahu’s wife, Sara, who also attended the audience, reportedly told the pope, “We are expecting you, we can’t wait.”

The Vatican statement said that “aside from indicating the Holy Father’s plans for a pilgrimage to the Holy Land,” the pope and Netanyahu considered “various questions” regarding the status of Christians in Israel.

It said they also discussed lingering financial and other questions that have stalled full implementation of a formal bilateral agreement between Israel and the Holy See “in the hope that the Agreement which has been in preparation for some time may be concluded forthwith.”

Netanyahu on Sunday night lit Hanukkah candles at Rome’s main synagogue, where he reiterated warnings about the agreement on Iran’s nuclear program. Netanyahu kindled the menorah with Letta.

Speaking at the ceremony, the Israeli leader repeated his warnings that the recent deal on Iran’s nuclear program was a “historic error.”

Letta said he “knew Israel’s positions, doubts and fears.” He said the current economic and social crisis fed “extremism, hate and intolerance,” and he pledged to resist the “racism, intolerance and xenophobia” that were growing in Italy “in a worrying manner.”