Bill on Israel’s African migrants has their advocates crying foul 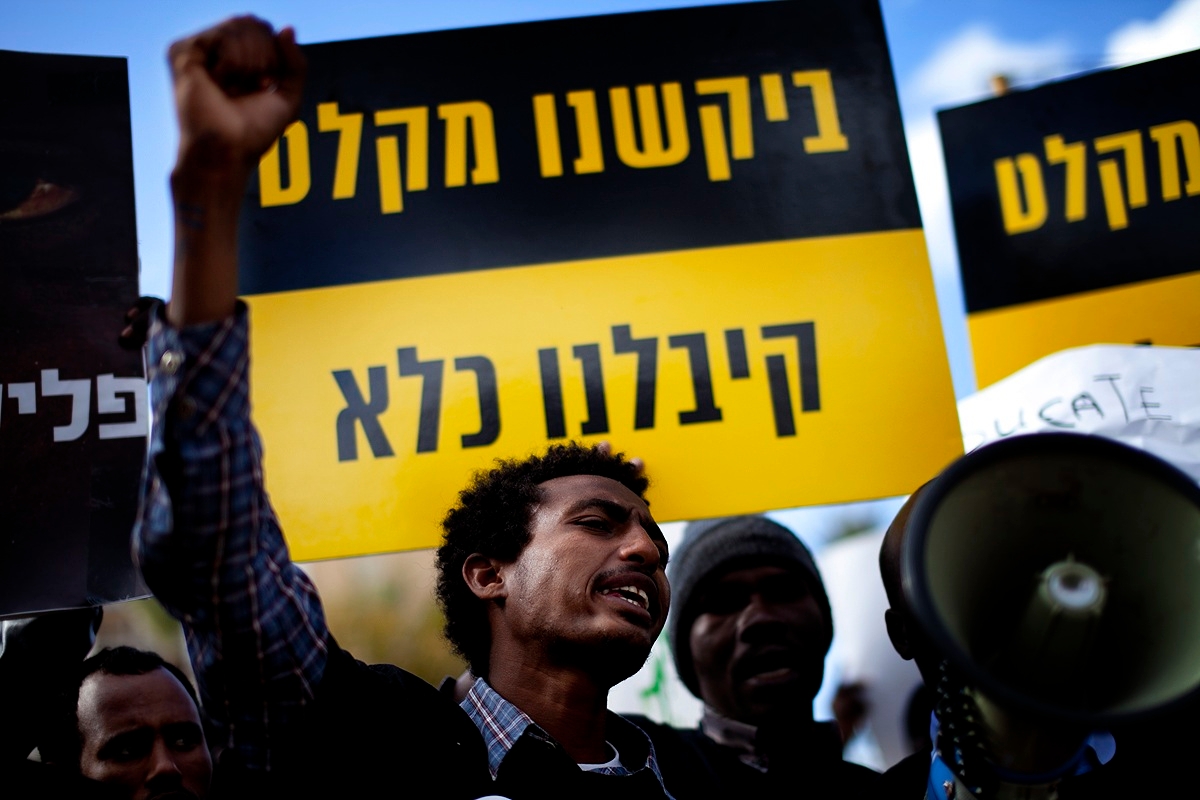 Activists at a 2011 rally in Tel Aviv gather under a banner that reads, "We requested refuge, we received prison." (Dima Vazinovich/Flash90)
Advertisement

SAHARONIM, Israel (JTA) — A long chain-link fence with barbed wire seems to rise up out of the desert at the new Sadot facility in Israel for African migrants.

Situated along Israel’s barren border with Egypt and across the street from the notorious Ketziot Prison, which houses thousands of Palestinian prisoners, Sadot is slated to begin operations this month as an “open residence facility” for some 3,300 African migrants.

In a large dirt field, long rows of railroad-style red-and-beige rooms sit under a long, white-pitched roof. Behind them, the rounded metallic tops of large hangars peek out. Like Ketziot, Sadot will be run by Israel’s Prison Service.

The residence is the centerpiece of proposed legislation meant to provide a framework for handling the African migrant population in Israel.

The bill, which passed an initial vote with a strong majority in the Knesset last week, is expected to become law in the coming weeks. Backers of the measure hope it will encourage migrants to return voluntarily to their home countries.

“We need to create a deterrent,” Interior Minister Gideon Saar, of the Likud party, said in a Knesset debate last week. “The location of Israel as the only Western state sharing a border with the African continent necessitates it. If we decide to be the exemplar of liberalism among Western states, we will bring about, with our own hands, the destruction of the only Jewish state.”

A new facility built along the Egyptian-Israeli border is slated to begin operations this month as an “open residence facility” for some 3,300 African migrants. (Ben Sales)

According to the Israeli government, some 60,000 African migrants crossed into Israel illegally from Egypt between 2006 and early this year, when Israel completed a border fence that virtually halted the cross-border influx.

Proponents of the bill say the African migrants — whom the bill and many Israelis refer to as “infiltrators” — pose a threat to the state’s social order and its Jewish majority.

Last year, tensions over the migrants prompted angry demonstrations, and polls taken at the time showed that 40 percent of Israelis supported their mass expulsion from the state. Last week, the government approved a plan to provide stipends of about $3,500 to migrants who choose to leave Israel.

But human rights groups in Israel say the Africans, most of whom hail from the dictatorships of Eritrea and Sudan, are refugees fleeing violence and forced military conscription, and they should be granted asylum. The advocates are condemning the proposed legislation as draconian.

“It’s meant as a tool to embitter their lives to the point where they’ll self-deport,” Marc Grey, a spokesman for the Association for Civil Rights in Israel, told JTA. “This is not a solution. This allows the government to say, ‘Look, we’re not really releasing these people.’ ”

The proposed law aims to replace legislation passed last year allowing up to three years’ imprisonment without charge for anyone who crosses the border illegally. Israel’s Supreme Court unanimously struck down the law in September because it violates a guarantee of personal freedom enshrined in one of the Basic Laws — Israel’s equivalent to a constitution — even if a person is in Israel illegally.

Now the state must pass its replacement law by a court-ordered deadline of Dec. 15 or release the 1,500 migrants imprisoned in the Saharonim detention center near Sadot. The high court mandated that any new law significantly lighten the punishment for illegal immigration, which the government says the proposed law fulfills.

Under the bill, the migrants would be detained in prison for one year, not three, and then transferred indefinitely to the open facility, where they would receive food, shelter and health care. The bill’s sponsors hope the stick of Sadot plus the carrot of the financial grants will persuade migrants to find a way out of Israel.

“The law needs to remove economic incentives for them to come and send back people whose lives aren’t in danger,” said Yonatan Jakubowicz, director of public relations for the Israel Immigration Policy Center, which supports the bill. “The open facility takes away the ability to work but gives them respect and fulfills all their needs.”

While in theory migrants will be able to leave Sadot freely, several of the facility’s restrictions would restrict free movement. Residents would have to stand for roll call three times a day, a process that could take hours, and the facility’s gate would be locked between 10 p.m. and 6 a.m.

In addition, migrants would be prohibited from working outside the facility. Though jobs will be available inside the facility, the government would not be required to pay minimum wage.

“The government is mandating prison for a year, and then an open facility run by prison guards,” said Michal Rozin, a Knesset member from the Meretz party, which opposes the bill. “You can’t work. What are you supposed to do all day? It’s like a jail. It’s mocking the court’s decision.”

Instead, advocates propose that the government evaluate the migrants’ asylum requests and provide them with social services, such as health and job protection. While migrants are now entitled to free education and are not penalized for working, they do not hold work visas and are not entitled to public health care.

But with broad Knesset support for the proposed bill, including backing from inside the government coalition and outside it, such a scenario is unlikely.