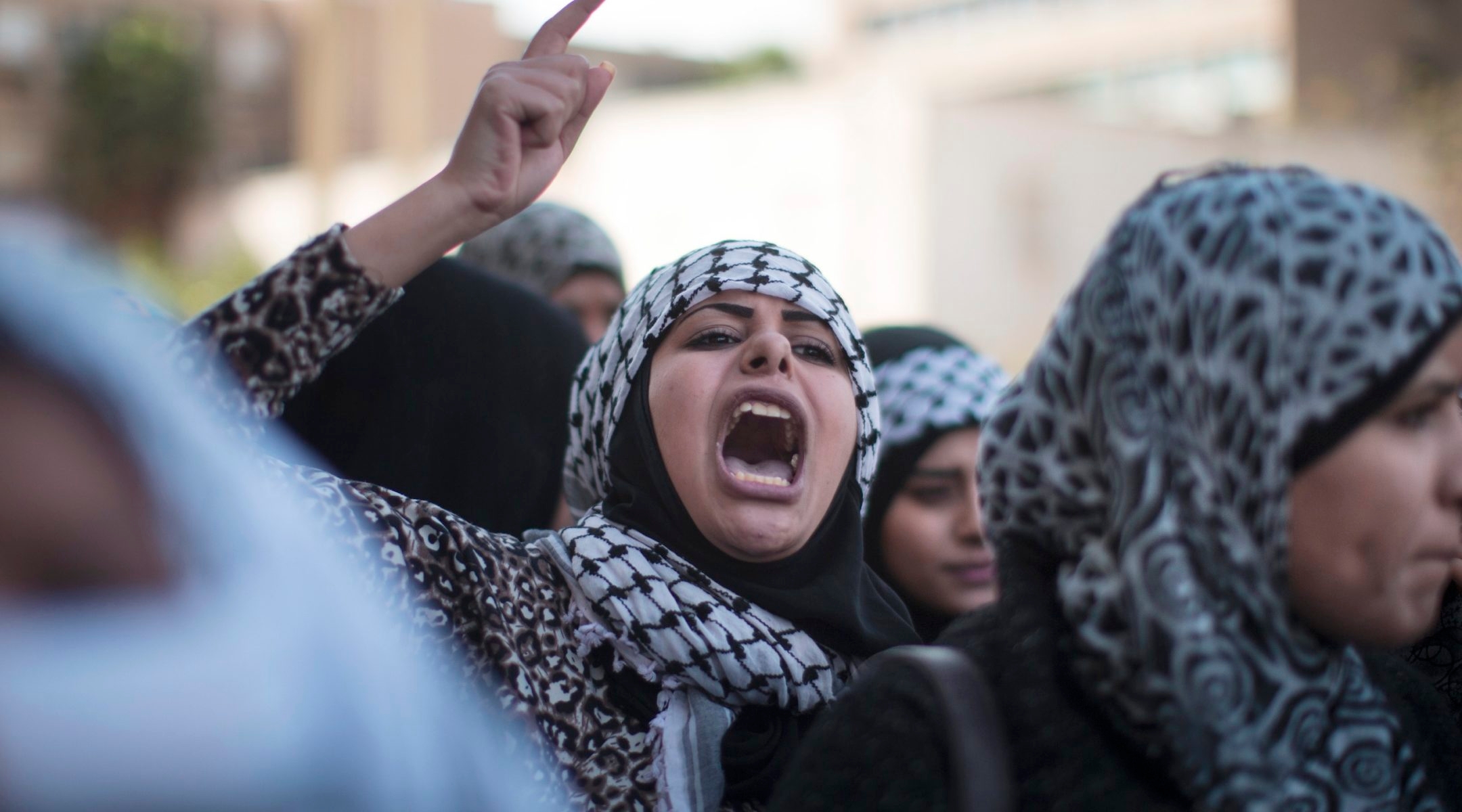 A woman shouting during a protest by Israeli Bedouin against the Israeli government's Prawer Plan, Dec. 5, 2013. (Uriel Sinai/Getty Images)
Advertisement

But when it comes to the Israeli government’s plan to relocate 30,000 Negev Bedouin, representatives and allies of the Bedouin community agree with the right wing on one thing: the Prawer plan must be stopped.

At a meeting this week, leaders of an alliance between Negev Bedouin and several left-wing groups adopted a proposal to join with “right-wing opponents” of a bill that would relocate tens of thousands of Bedouin from their homes in unrecognized villages in southern Israel. The plan calls for moving the Bedouin into recognized towns nearby with modern services and amenities while providing them with partial compensation for their property.

“You need to have an elementary school, kindergarten and health care at the center of the modern community,” said Doron Almog, director of the Headquarters for Economic and Community Development of the Negev Bedouin in the Prime Minister’s Office. “We’d like to replace poverty with modernity.”

The plan is alternatively referred to as Begin-Prawer or Prawer after its two authors — former Knesset member Benny Begin and Ehud Prawer, the director of planning in the Prime Minister’s Office. It would recognize some of the unrecognized villages while moving the inhabitants of others.

The government says the plan is a comprehensive land reform measure aimed at providing infrastructure, education and employment opportunities to the historically underserved Bedouin population in the South. But critics of the proposal point to the 30,000-40,000 Bedouin that would be uprooted in what they claim is just the latest move by the government to strip them of their land to create space for Jewish settlement.

“We want rights like everyone else,” said Attia Alasam, the head of the Regional Council of Unrecognized Villages. “The state doesn’t see that the Bedouin have problems. They see the Bedouin as the problem. The state can’t put people on trucks and spill them into towns.”

The fight over the plan has been contentious. Protests across Israel have left several Israeli police officers injured and led to dozens of arrests. Several human rights groups have blasted the plan. Last week, Arab lawmakers appealed to U.S. Secretary of State John Kerry, asking him to block what they allege amounts to “ethnic cleansing” of the Bedouin.

It’s far from certain that the partnership proposal will come to fruition, but the effort represents a rare attempt at pragmatic compromise in a debate that has been dominated by dueling perceptions of reality.

At the meeting — representatives of the Arab-Jewish political party Hadash, the Regional Council of Unrecognized Villages and the Negev Coexistence Forum for Civic Equality attended — Alasam and others sounded optimistic that they could find common ground with right-wing activists even though their ultimate objectives are almost certainly incompatible.

Alasam wants the government to allow the Bedouin to stay in the unrecognized villages. Right-wing activists believe the Bedouin have no right to stay where they are. Their issue with the plan is that it’s too vague on specifics — the government has presented no map outlining exactly who it plans to relocate, and to where — and amounts to an overly generous payout to Bedouin that, in this view, have been squatting illegally for decades.

Moshe Feiglin, the head of the Jewish Leadership faction of Prime Minister Benjamin Netanyahu’s Likud party, voted against the plan because it “hands the Negev over to the Arabs.” Zvulun Kalfa of the Jewish Home party opposes the bill because it’s too vague.

That’s also the objection of Ari Briggs, the director of international relations for Regavim, a right-wing organization that wants to protect Israel’s lands from “foreign elements” and compel state bodies “to act based on the fundamental principles of Zionism.” Briggs says the plan is not specific enough about the final boundaries of recognized villages.

“The only reason we need to solve those land claims is so the Bedouin can move into those cities,” Briggs said. If the law doesn’t address the unrecognized villages, he added, “We haven’t solved anything.”

Knesset member Miri Regev, who heads the committee debating the bill, echoed that criticism last week when she criticized Almog for not presenting her committee with a proposed map of Negev towns.

“I think the time has come to organize Bedouin settlement,” Regev wrote on Facebook last week. “It’s unlikely that the Bedouin are taking over the Negev’s lands, and given that, the solution needs to be formulated deliberatively and in a way that’s transparent to all sides.”