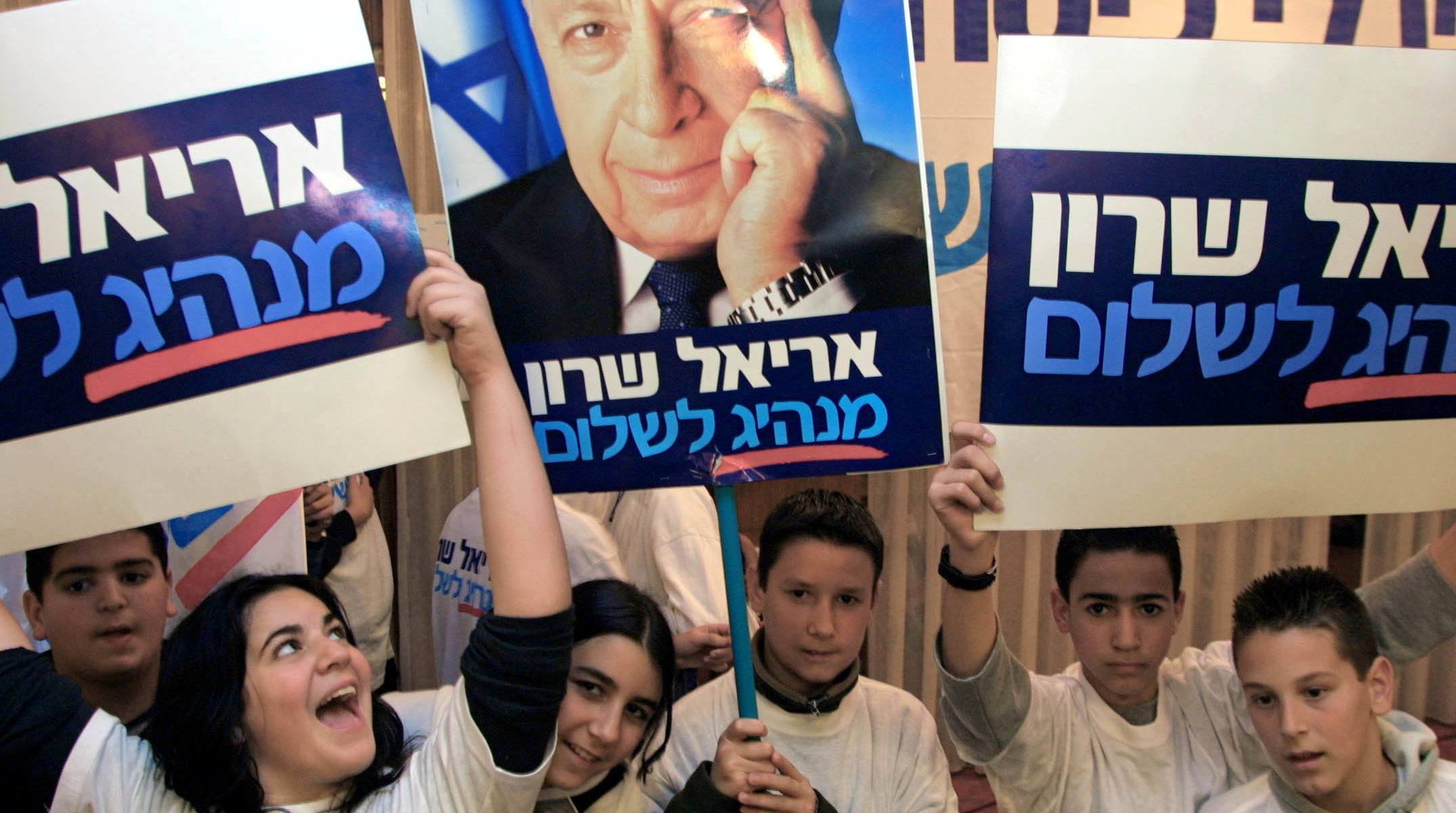 Young supporters of Ariel Sharon in the Israeli town of Holon wave posters on Feb. 4, 2001 during his successful campaign for prime minister. (David Silverman/Newsmakers via Getty Images)
Advertisement

(JTA) — Ariel Sharon turned into a statesman late in his political career. Two developments made this possible: First, Sharon learned the hard way what he needed to do to become an effective leader of the Jewish state, and second, Israeli political circumstances became favorable to the kind of leadership he could uniquely offer.

Following the 1982 Lebanon War, many Israelis viewed Sharon as an irresponsible radical who could not be trusted with the country’s fate. Meanwhile, in Washington, he was notorious for advocating provocative measures and preventing other Israeli leaders from pursuing more conciliatory policies. His inflammatory opposition to the Oslo process in the 1990s only reinforced these perceptions.

Toward the turn of the millennium, Sharon realized that he could no longer afford these liabilities if he wanted to lead Israel. He had learned from his traumatic political failure in the Lebanon War. This experience demonstrated the importance of making sure that his policies and conduct reflect the preferences of the Israeli mainstream. It also showed the strategic imperative of establishing unshakable trust with the American administration and people.

But it was not only Sharon who changed. Sharon could not have moved from the far end of the right wing to the center of the mainstream consensus had Israelis not undergone their own dramatic political transformation on the eve of his premiership.

After the Palestinian rejection of proposals for statehood on almost all the West Bank, Gaza and Arab East Jerusalem, and after the savage war of terror launched by Yasser Arafat against Israeli civilians in the second intifada, mainstream Israeli opinion realized that this Palestinian leadership could not be a partner for a historic compromise with the Jewish state. Most Israelis wanted a leader who would crush Palestinian terrorism but who would also not incorporate the West Bank and Gaza into Israel, would not abandon the quest for regional alliances and accommodations, and would certainly not endanger the all-important partnership with the United States.

The Israeli political system shifted from the polarized pattern of the 1980s and 1990s to one with a robust political center. Most of the Oslo-supporting moderate left moved to the middle, and Sharon moved from the right to a position where he could speak for this mainstream.

I had the opportunity to see him change firsthand. When I met with Sharon in 1999, I predicted that if he assumed the supreme responsibility of leading Israel, he would end up building a defensive barrier, accepting a potential Palestinian state and dismantling some of the settlements he had fathered. At the time, he dismissed my predictions. But within four years, he began his dramatic transformation.

When Sharon was running for prime minister, his feet were still firmly planted on the right. But his head soon turned toward different and broader horizons. Sharon explained that what one sees from the perspective of prime minister, one cannot see from any other vantage point.

After crushing Palestinian terrorism (2002-2004) and establishing a relationship of intimate trust with President Bush, Sharon carried out the 2005 unilateral disengagement from Gaza. When Sharon realized that he no longer had the support of the Likud, the party he founded in the 1970s and led to victory in 2001, he formed Kadima to reflect the new mainstream that he both represented and partially molded.

In disengaging from Gaza, Sharon showed that Palestinian irresponsibility and unwillingness to recognize a Jewish state would not stop him from doing what was necessary from a Zionist perspective. Although the withdrawal was followed by more rockets and terrorism, Israel ultimately has benefited from his decision. Israeli society is much stronger without Gaza than with Gaza. And a strong Israeli society is crucial to maintaining our security.

Sharon steered Israel away from simple-minded solutions and toward frustrating compromises, at the expense of the pursuit of a perfect “peace.” Speculation about what he might have done if not for his stroke is likely to only reflect what the speculator seeks to project onto a respected leader. But we can evaluate what Israel lost when Sharon went into a coma: a charismatic statesman who came to the premiership long after he had committed his worst mistakes, who learned the appropriate lessons and who came up with a balanced response to his country’s complex challenges.

(Dan Schueftan is director of the National Security Studies Center at the University of Haifa and a Goldman visiting professor at Georgetown University.)