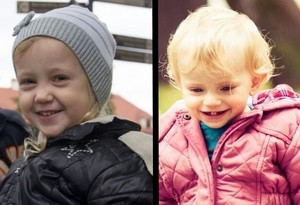 Avigail and Yael Gross have captured Israelis' hearts. (Courtesy of the family)
Advertisement

The faces of the two little girls with their blond hair and their wide smiles have been very difficult to get out of my mind.

Avigail and Yael Gross, ages 1 and 4, were buried Thursday in a Jerusalem cemetery. They had been rushed to the hospital the day before, along with their parents and older brothers, after being exposed to lethal chemicals used to exterminate their Jerusalem apartment.

The photos of the beautiful little girls stared at me from every news website I looked at last week and from the front page of every national newspaper when I walked past the corner store.

The other image that has stuck with me is that of their parents, Michal and Shimon Gross, in a photo taken Thursday before the funeral. They are pale and broken-looking, both from grief and from suffering the ill-effects of the poison themselves. I cannot imagine what they are going through, and I ache for them.

I am not alone. Israelis everywhere are grieving with this couple, and awaiting the news of the progress of their two sons, ages 5 and 7, who remain hospitalized and in very serious condition.

The tragedy was the second to affect an innocent young child and his parents in less than a week, On Jan. 20, a gas explosion in an apartment in Jerusalem’s Gilo neighborhood claimed the life of 2-year-old Yosef Toffman and his parents Avraham, 56, and Galit, 42. The accident is being blamed on a gas technician who visited the building the day before to fix the gas system.

In the case of the Gross family, the exterminator remains under house arrest and is blamed for using poison lethal to humans in the young family’s apartment, though the young couple has asked the public not to speak ill of the man who they say made an honest mistake and was simply God’s messenger.

Many of us have had our homes exterminated and remember clearing out with the kids for the day so as not to suffer ill effects. We remember our children when they were as young as the Gross’. But most of us have never had to sit shiva for our children, while at the same time running to the hospital to sit at the bedside of our seriously ill children.

The photos, the tragedy and the plea for prayers on behalf of the surviving children have grabbed hold of the public’s heartstrings and are not letting go. It does not appear to matter whether that member of the public is Orthodox or secular, Ashkenazi or Sephardi. Tragedy is tragedy. Children are children.

In the hours after the deaths of the little girls I received no less than four messages on e-mail and Facebook asking me to pray for their brothers. In the ensuing days I have received dozens more. They have come from my neighbors (in a strange six degrees of separation, one of the children’s grandmothers is the sister of one of my neighbor’s sisters-in-law), from strangers, from Jewish organizations both in and outside Israel. Clearly I am not alone in receiving these heartfelt messages.

Meanwhile, the boys’ mother also has called on the public through the media, Facebook and the personal appeals of other family members, to do mitzvot on behalf of her sons and to pray for their recovery, something that I believe Israelis of all stripes are doing. When you look at that mother how can you not?

And hopefully the prayers are beginning to be answered. The boys have both been disconnected from the machines that were pumping oxygen into their hearts and lungs and on to the rest of their bodies as doctors wait for the toxins, for which there is no known cure, to leave their bodies. They remain on respirators but according to their father have responded to his voice by squeezing his hand. .

Their long road to physical recovery is just beginning. I and my fellow countrymen wonder how long it will take them to recover emotionally.