With Venezuela in a tailspin, growing number of Jews opting for Plan B 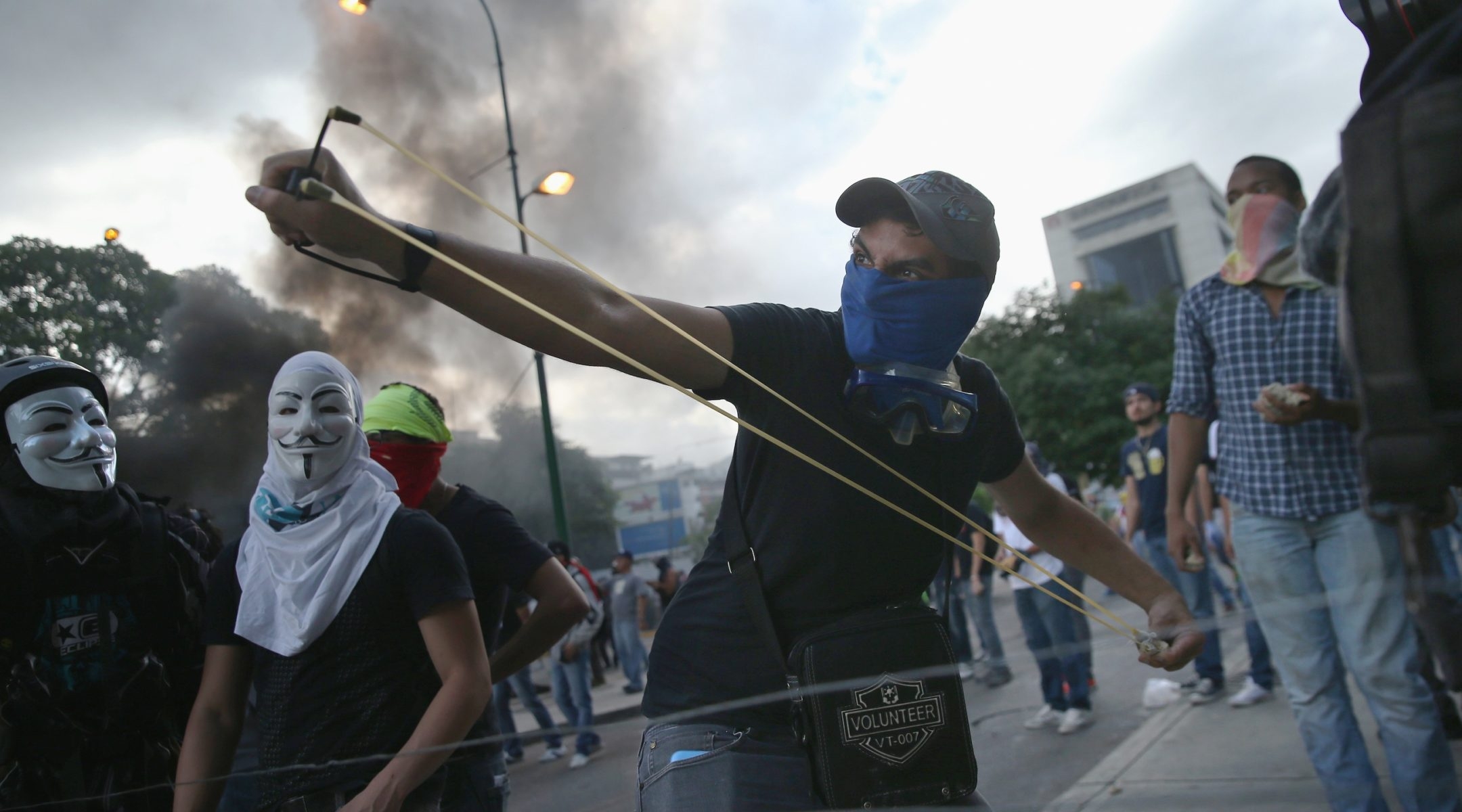 A man uses a slingshot against national guard troops following one of the largest anti-government demonstrations yet on March 2, 2014 in Caracas, Venezuela. (John Moore/Getty Images)
Advertisement

(JTA) — They left after Venezuelan secret police raided a Jewish club in 2007, and after the local synagogue was ransacked by unidentified thugs two years later.

They left after President Hugo Chavez expelled Israel’s ambassador to Caracas, and when he called on Venezuela’s Jews to condemn Israel for its actions in Gaza in 2009.

They left when Caracas claimed the ignoble title of most dangerous city in the world — and when inflation hit double digits, food shortages took hold and the country’s murder rate reached 79 per 100,000 people.

With Venezuela now roiled by anti-government demonstrations — the death toll reached 18 last Saturday — Venezuelan Jews who remain have yet another reason to leave their country: growing despair.

“There’s less hope about the future,” said Andres Beker, a Venezuelan Jewish expatriate in the United States whose parents still live in Caracas. “My parents are huge fans of Venezuela. Until last year I thought they would stay no matter what. Now, for the first time, they’re talking about Plan B: leaving Venezuela.”

Over the last 15 years, from the time Chavez came to power and in the year since Nicolas Maduro has ruled the country, the Venezuelan Jewish community has shrunk by more than half. It is now estimated at about 7,000, down from a high of 25,000 in the 1990s. Many of those who left were community leaders.

It’s not just Venezuelan Jews who are leaving. Hundreds of thousands of middle- and upper-class Venezuelans have relocated in recent years, swelling the size of expat communities in places like Miami, Panama, Costa Rica, the Dominican Republic and Colombia.

The exodus of Venezuelan Jews has put a great strain on the community’s institutions.

“Emigration has really played a big factor in the community — that’s our main problem,” said Sammy Eppel, a Caracas journalist and Jewish community member who also serves as director of the B’nai Brith Human Rights Commission in Venezuela.

“When we were a numerous and prosperous community, we built numerous and heavy institutions,” Eppel said. “A lot of our members have left, and we are left with the same institutions but with less people to take care of them. We have to make serious adjustments while making sure the services we provide to the community don’t suffer.”

A high school junior named Allan who attends the Jewish community school, Hebraica, says his grade has shrunk to 85 students from 120 six years ago. The younger grades are much smaller, with 40-50 kids each. The school is now considering combining the first and second grades, he said.

Interested in keeping as low a profile as possible, leaders of Jewish institutions in Venezuela declined to be interviewed by JTA for this story.

The massive anti-government demonstrations that began on Feb. 12 were sparked in part by new lows for Venezuela’s economy and an upsurge in violence.

“It started deteriorating to the point where a couple months ago you couldn’t get milk, chicken, eggs, toilet paper,” Beker said. “It’s really started to affect all families.”

Allan, the high schooler, said the streets long have been off limits for him and his friends, due to threats of violence and kidnapping. But these days, it’s hard to leave the house to go anywhere.

Outsiders might puzzle over why anybody would stay given the challenging circumstances of daily life. But Venezuelan Jews say leaving home is never easy. There are those with jobs that can’t be shifted overseas, and those who lack the money or energy to leave and start over somewhere else. And the changes have been gradual enough that, time and time again, Venezuelan Jews — like their gentile countrymen — simply have adjusted to the new reality.

“It’s a matter of adjusting, I think, not a matter of survival,” Eppel said. “That’s what the community has been trying to do: adjust to adverse circumstances.”

Sandra Iglicki, who left Venezuela for South Florida a decade ago but still goes back often, says it’s also been emotionally difficult to leave a country that for decades was good to Jews, serving as an anti-Semitism-free refuge for European Jewish families who fled the Nazis.

“It’s very painful for the community in Venezuela,” she said.

And there’s still some hope, even among expats, that the country eventually will right itself.

“If you talk to a lot of Venezuelans that are here, they’re waiting for this to be over,” Iglicki said in a phone interview from Florida. “I would love to go back to Venezuela.”

Many emigrants still work in Venezuela, commuting back for weekdays to run their businesses while their families adjust to life in a new country.

In Miami, the last few weeks have been particularly fraught for Venezuelan expats, filled with anxious phone calls to relatives back home and endless agitation on social media.

With state media in Venezuela blacking out news of the massive demonstrations, the expats have occupied the peculiar position of funneling news to relatives back home in Caracas about what’s happening in Venezuela, often via Facebook, Instagram and Twitter. Offline, there have been large demonstrations in Miami against the Maduro government, which is blamed for Venezuela’s tailspin.

“This is something that in Miami is top news every day,” said Juan Dircie, associate director of American Jewish Committee’s Latino and Latin American Institute in Miami. “The exile community of Venezuelans has been holding rallies, doing interviews on TV, writing letters to the editor. The demonstrations are in favor of democracy and human rights, but of course there is a big component of opposition to the Maduro government.”

Beker, who left Venezuela eight years ago at age 17 to go to Emory University, said he recently did a quick tally to calculate whether he had more family members in Miami or Caracas. He said he was shocked when he realized Florida won out.

“It’s a little sad,” Beker said. “You think: I’m just going to college for a couple of years and coming back. But that never happens.”