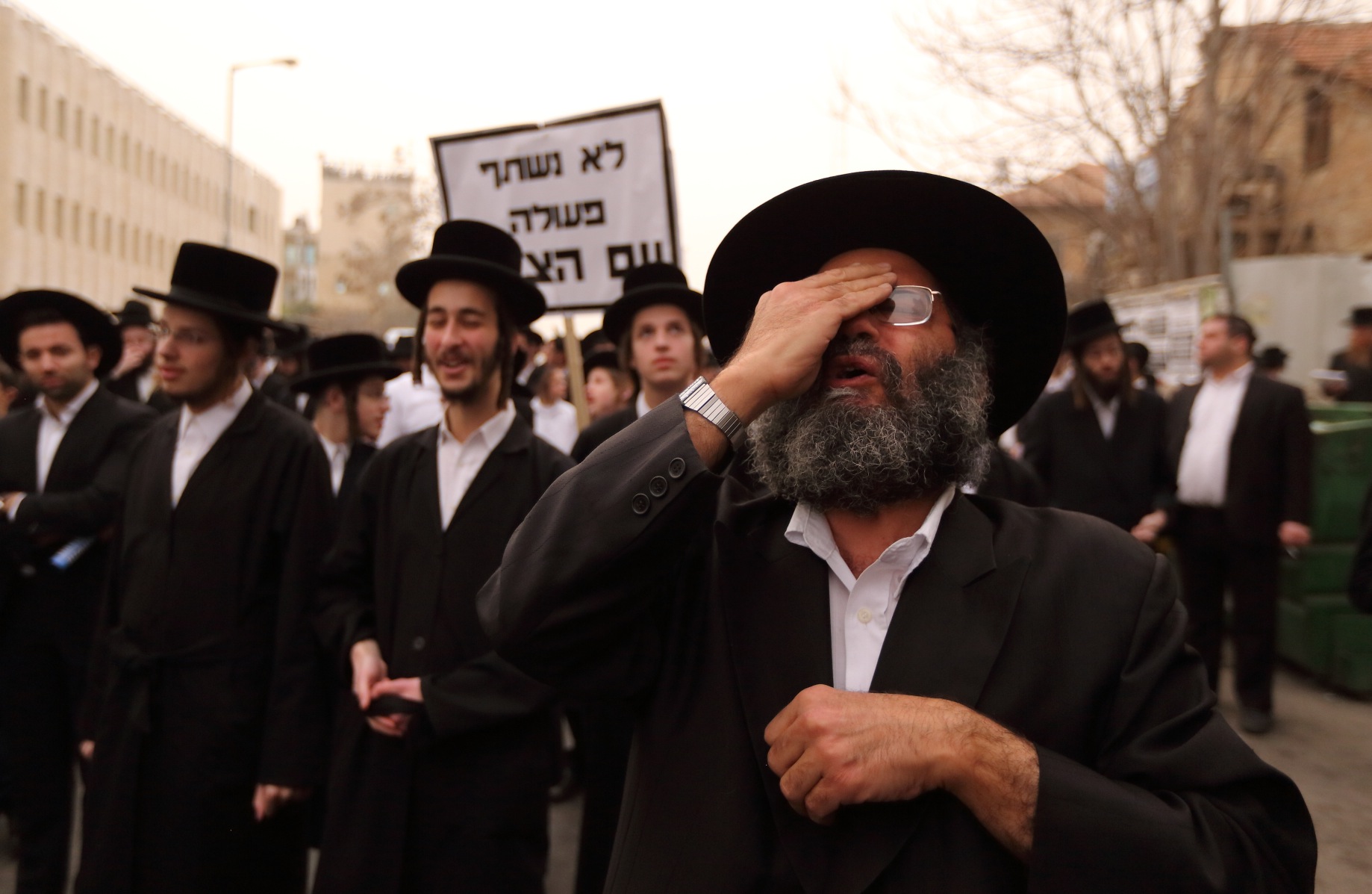 Hundreds of thousands of haredi Orthodox Jews protesting a measure to draft them into the Israeli military, March 2, 2014. (Yaakov Naumi/FLASH90)
Advertisement

JERUSALEM (JTA) — Beneath banners invoking historic calamities from the Egyptian enslavement to the Holocaust, hundreds of thousand of haredi Orthodox men gathered on the streets of Jerusalem to recite psalms and penitential prayers as they inveighed against an enemy they consider on par with Hitler and the ancient pharaohs.

Though the bill wouldn’t penalize haredi draft dodgers until 2017, it has nonetheless exacerbated a long-simmering kulturkampf. Mandatory military service is a rite of passage in Israel, one from which haredi Israelis have been exempt since the state’s founding in 1948. Many Israelis see the bill as a vital step toward “equalizing the burden,” as the campaign for its passage calls itself.

“A historical legal injustice that has existed for 65 years has been corrected because we were determined and stood for what was ours,” Yair Lapid, chairman of the centrist Yesh Atid political party, wrote in a lengthy Facebook post — his primary mode of public communication — after the vote. “Everyone looked at us and understood that we wouldn’t capitulate, because these are our values. Zionism is back, and it’s returned with esprit de corps.”

Yesh Atid sits in Israel’s first governing coalition without haredi parties in a decade, one that has advanced a spate of initiatives to curb longstanding haredi privileges. Along with conscription reform, the past year has seen the government move toward recognizing non-Orthodox Judaism, instituting civil marriage, mandating math and English classes in haredi schools and slashing welfare subsidies to large haredi families.

Many Israelis see these measures as steps toward a more equal and fair society, but in the eyes of many haredim, they are a threat to their way of life and even to Jewish tradition.

While the Israel Defense Forces annually drafts about 2,000 haredi teenagers into special religious units, most of the 7,500 haredi boys that turn 18 annually receive exemptions to study in yeshivas. The proposed law would essentially flip those statistics: 1,800 haredi students would receive exemptions and state funding to study, while the IDF would aim to draft draft 5,200 haredim annually by 2016. By 2017, any haredi Jew who dodges the draft would, like other draft dodgers, face prison time.

Kravitz says the bill would criminalize Torah study, but in the eyes of activists who support it, it doesn’t go far enough. Rabbi Uri Regev, director of the religious pluralism organization Hiddush, said that the bill’s delay of criminal sanctions until 2017 provides time for haredim to run in another election and possibly re-enter the governing coalition, where they might be able to roll back the law. Regev also doubts that Israel will be able to imprison thousands of haredim if they disobey the law en masse.

“It’s a charade rather than a genuine attempt to achieve equality in sharing the burden,” Regev said. “Imprisonment is not an effective measure when you’re not dealing with individual offenders but thousands who theologically reject service.”

At Sunday’s protest, some haredi men said they trust God to protect them from the bill. Klemi, 22, a student at Jerusalem’s Mir Yeshiva who didn’t give his last name, said that yeshiva students are the main guardians of Israel while the army is more of a danger than a defender.

“If we all learned, there wouldn’t be wars,” said Klemi, 22, a student at Jerusalem’s Mir Yeshiva who didn’t give his last name. “God would fight our wars. I’m sure we’ll go to prison and keep learning there.”