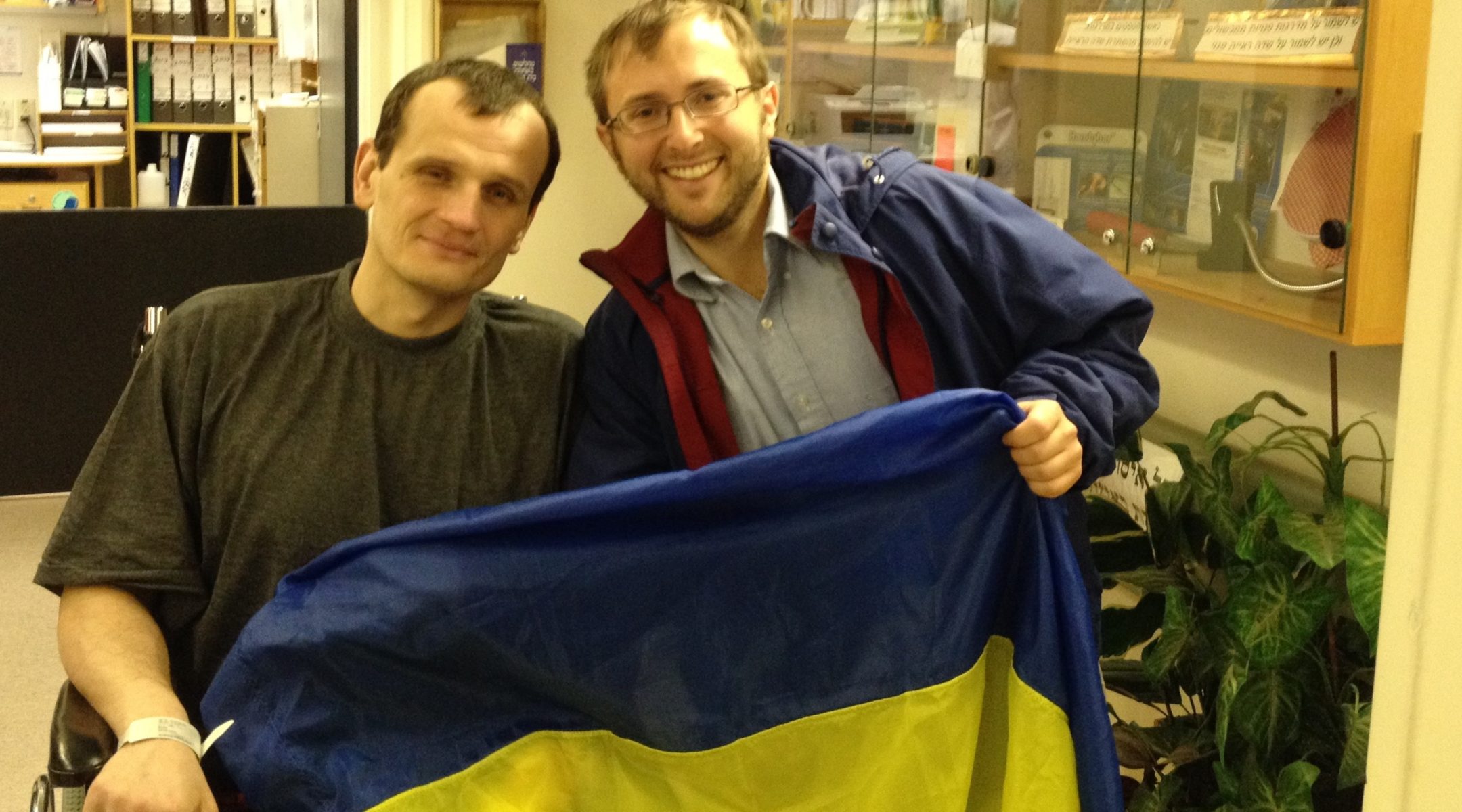 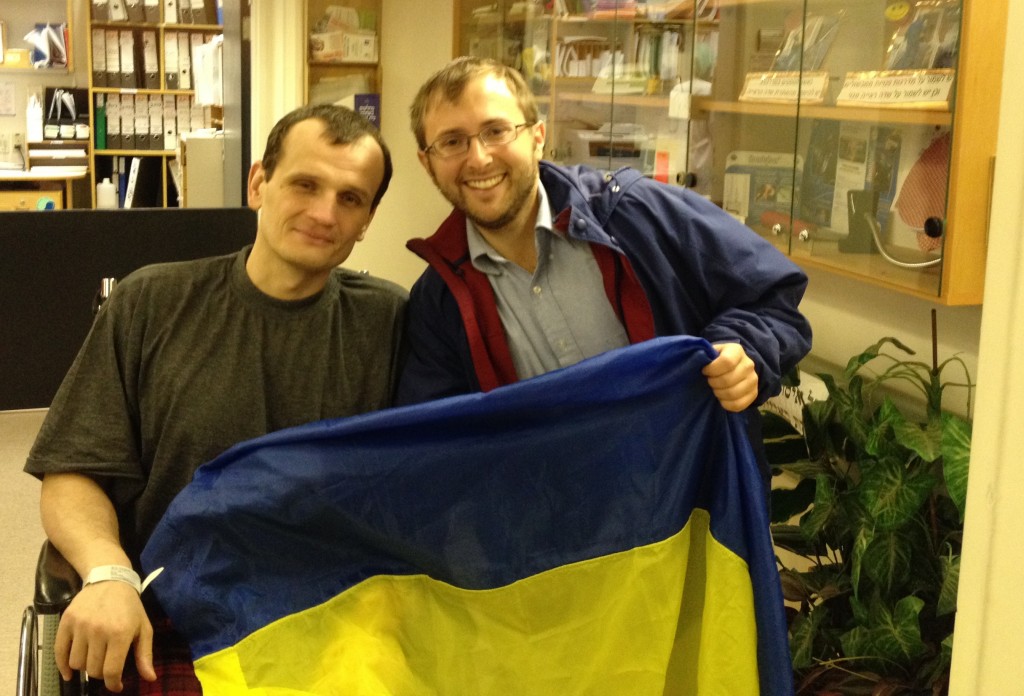 Artem Zaptotski, from Lutsk, in western Ukraine, sits in Hadassah Hospital in Jerusalem, sharing his room with a French Hasid. Seeing that I speak Hebrew and wear a kippah, the Hasid asks if he should encourage Zaptotski to put on tefillin. No, I tell him. Zaptotski isn’t Jewish. In fact, he had only one Jewish friend until 10 days ago.

As we are speaking, one of Zaptotski’s legs slips out of his “Yad Sarah”- provided wheelchair. He struggles for a few moments to shimmy it back into place, sighs, and asks me for help. And as I, a 26-year-old Torah student from New Jersey, grasp the lifeless limb of this 34-year-old Ukrainian lawyer, he looks me in the eye and makes a verbal declaration before God: “I will walk again.”

On Feb. 20, Zaptotski was shot by a sniper near Kiev’s Maidan, or Independence Square. Enraged by what he had seen take place on Feb. 18, when the government opened fire on the protesters, he left his wife and two small children at home and rode across the country by bus to support his countrymen on the square.

While standing near Maidan that day, one bullet pierced his lung, and another pierced his legs. His spine was also affected.

But he is resilient. When he arrived in Israel from Ukraine he couldn’t sit up, and his arms were weak. Today, he is sitting up by himself, and he swears to me that just the other day he felt a tingling in his toes.

When I first saw Marina Lysak’s post on Facebook a few weeks ago, quickly reposted by a number of her friends, advertising her efforts to send some of the Maidan’s wounded to Israel for treatment, I wrote a quick email offering my services.

I had met Lysak when I was a Peace Corps volunteer in Ukraine. A young Jewish Ukrainian who is well known throughout the city as a top Hebrew teacher, Lysak has been to Israel many times, and it was her early love affair with the country that pushed her to organize this rescue effort.

Truthfully, I didn’t see how she would pull it off. But within a few days Lysak and her team of four other Jewish Kievans, with help from a team of other Ukrainians, had found a plane, a pilot and $70,000, with the proper documents to boot.

Lysak had been out there on the square during the protests, volunteering at hospitals, standing with her fellow citizens. Her determination to send the wounded to Israel was a way to let her blue-and-white Jewish identity fly next to the yellow-and-blue flag of Ukraine.

Anya Zharova called me, in response to my email, a few days after the wounded arrived in Israel. Zharova left Ukraine 14 years ago, at the age of 20. While she has been back to visit, she very much considers herself an Israeli, and her young daughter is a sabra.

I asked her how I could help, offering my services as a Ukrainian-speaker. She began rattling off ideas about organizing volunteers to visit the injured and making sure the family members of the wounded were being looked after; just last week, she sent them to the Dead Sea for some much needed respite. By the way, she asked, did I have $800,000?

Zharova has amassed a team of over 100 volunteers in Israel, most of them originally from the former Soviet Union, many from Ukraine. They are mostly but not exclusively under 40, mostly Russian speaking, and most of them did not know each other until the call for volunteers went viral. They are a constant presence at the hospitals and can be found knocking on the doors of Russian Jewish oligarchs at their shore-side Netanya homes, in search of donations.

Zharova told me that when she first saw the pictures on the news of those injured in Kiev and read Marina’s initial post for help on Facebook, it was Pirkei Avot, not politics, that compelled her to get involved. “If I am only for myself, what am I?” she thought.

Kaplan Medical Center, a hospital in Rehovot, agreed to take on 10 of the injured Ukrainians, but the two most serious cases, including Artem, were eventually sent to Hadassah Medical Center in Jerusalem. No matter the fact that there is no guarantee of financial recompense. No matter the strain this puts on the hospital’s bottom line.

I stand in awe of these Israeli doctors, many of them from the former Soviet Union, who are so eager to help Ukrainians who were shot as they exercised their right to stand freely. Now, they will help them stand again.

One of the lines Zaptotski kept repeating to me when we met was “Thank God for Israel.” What was this Orthodox Christian Ukrainian trying to teach me?