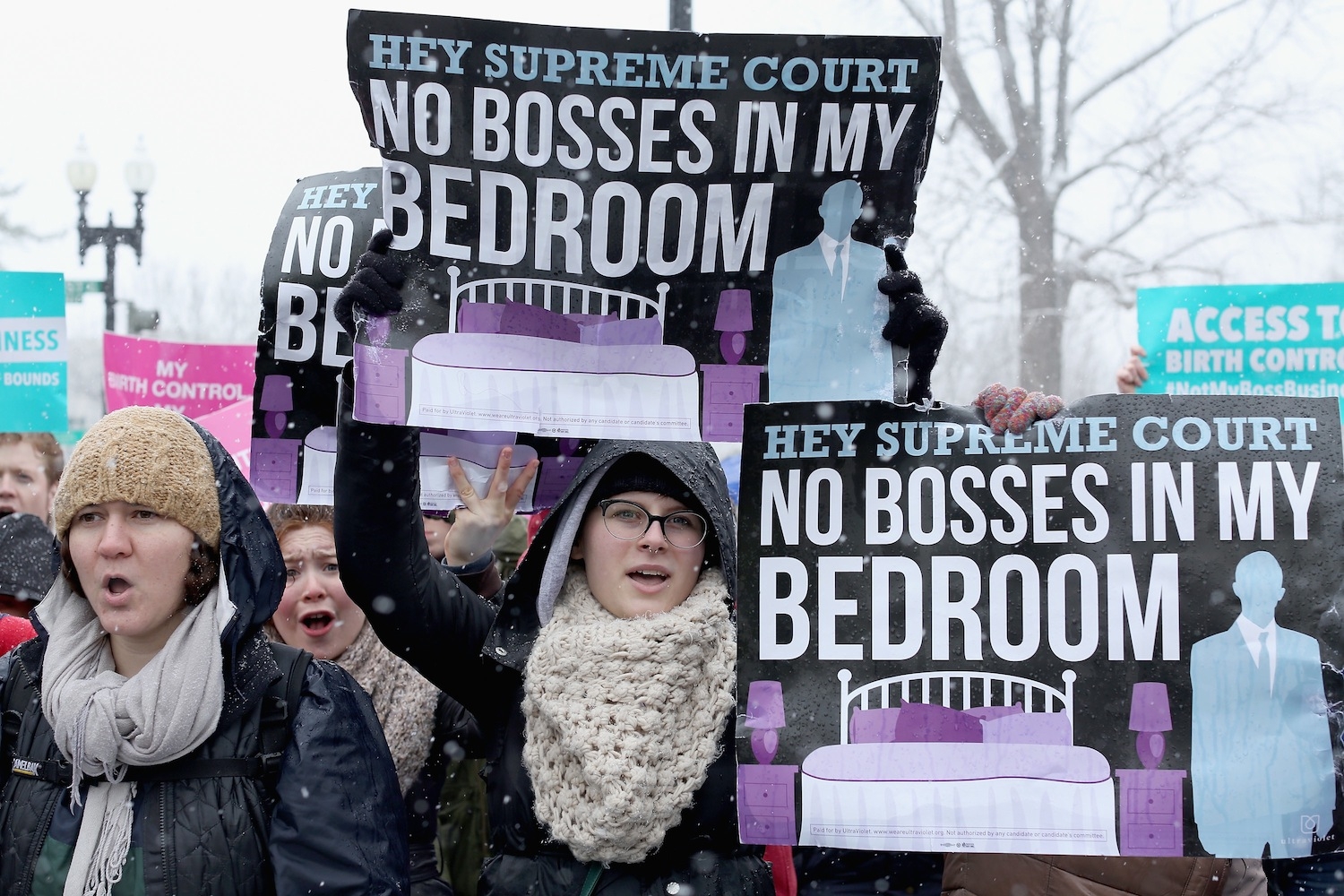 WASHINGTON (JTA) — For 20 or so minutes last week, the issue of religious freedom was cast as a struggle between working women and Muslim and Jewish butchers.

The pointed questions posed March 25 to the Obama administration’s chief lawyer by three U.S. Supreme Court justices got to the heart of whether businesses have the same constitutional religious protections as individuals.

National Jewish groups, united 20 years ago in passing the law that consolidated the religious freedom protections, are on opposite sides in the current battle at the Supreme Court, which is considering two federal court decisions concerning President Obama’s signature legislation, the 2010 Affordable Care Act.

Seven Orthodox groups in an amicus brief said rights established under the Religious Freedom Restoration Act of 1993 should extend to companies that do not wish to provide certain kinds of contraceptive coverage to their employees. Nine Jewish advocacy groups in two separate briefs said the rights of women seeking such coverage should be preeminent.

Under the Affordable Care Act, commonly referred to as Obamacare, companies must make available to their employees in their health insurance policies the full range of mandated coverage, including contraceptive services. There is an exemption for religious institutions and a work-around for their affiliated nonprofits.

While the case is about contraceptives, the issue of kosher slaughter ended up being a big part of the back-and-forth during oral arguments.

Citing recent Danish legislation, Justice Samuel Alito, an appointee of President George W. Bush, asked Solicitor General Donald Verrilli what rights would be available, given the administration’s arguments on behalf of the contraceptive mandate, to kosher and halal butchers should Congress ban their ritual slaughter methods as cruel.

“What would a corporation that is a kosher or halal slaughterhouse do?” Alito asked. “They would simply ­­ have no recourse whatsoever. They couldn’t even get a day in court.”

Verrilli responded that such a law would be unconstitutional because it targeted specific faiths.

Justice Anthony Kennedy, an appointee of President Reagan, interjected, then expanded the hypothetical to suggest the law would be framed not as targeting a religion but as advancing animal rights.

“They say no animal may be slaughtered unless it’s stunned first, unless the animal is rendered unconscious before it is slaughtered,” Kennedy said, describing his hypothetical law as having “no animus to religion at all.”

Verrilli replied that customers could then bring suit as third parties harmed by the law.

Justice Stephen Breyer, who is Jewish, was not satisfied with the answer.

“The point that Justice Alito was making is that ­­ take five Jewish or Muslim butchers and what you’re saying to them is if they choose to work under the corporate form, which is viewed universally, you have to give up on that form the Freedom of Exercise Clause that you’d otherwise have,” said Breyer, an appointee of President Clinton. “Now, looked at that way, I don’t think it matters whether they call themselves a corporation or whether they call themselves individuals. I mean, I think that’s the question you’re being asked, and I need to know what your response is to it.”

Verrilli, citing precedent, said that “when you incorporate as a for-­profit corporation, you are making a choice to live by the rules that govern you and your competitors in the commercial sphere.”

Justices’ questions in oral arguments are not always a predictor of their rulings, but Orthodox groups took heart in the citation of the rights of Muslim and Jewish butchers, and in the tough questions, particularly from Breyer, a usually reliable church-state separationist.

“I thought that it was a great argument,” said Nathan Diament, the the Orthodox Union’s Washington director, referring to the exchange.

Nathan Lewin, the lawyer who helped write the amicus brief for the Orthodox groups, which also included Agudath Israel of America and the National Council of Young Israel, among others, said Verrilli’s response was disappointing.

“Justices William Brennan and Potter Stewart did not agree with that proposition when, more than 50 years ago, they voted to uphold the constitutional right of Orthodox Jewish store owners to keep their stores open on Sunday because their faith forced them to be closed on Saturdays,” Lewin told the CNS news site.

Brennan and Stewart were dissenters in the 1961 Crown Kosher case who supported the right of a Massachusetts kosher market to remain open on Sundays when the state banned Sunday business. In the case, the court ruled that the market had to obey the state’s closure laws.

Defenders of Hobby Lobby and Conestoga have been at pains to emphasize that their corporations are privately owned, a bid to deflect criticism that extending religious protections to corporations would be a recipe for chaos, leading to questions of whose rights needed protecting — the CEO, the board, the shareholders.

“What they understood,” he said, referring to lawmakers in Congress, “is that we were probably talking about in the real world a relatively small set of corporations like an incorporated kosher market or kosher deli of the kind that this court had before it in the Crown Kosher case,” Clement said.

“And so I think it’s ­­ you know, we can talk about the extent and how you’d apply these principles to Exxon, but I think that’s just something that’s not going to happen in the real world,” said Clement, who was replying to a question from Justice Ruth Bader Ginsburg, a Clinton appointee who is Jewish, about why religious protections apply to for-profit companies.

“It is no accident that the claims that you have before you in these cases are brought by small, closely­ held corporations that have firmly held religious beliefs.”

Sammie Moshenberg, the Washington director for the National Council of Jewish Women, ridiculed Clement’s description of Hobby Lobby as “small,” noting that it had 18,000 employees in 450 outlets.

“If you accord corporations and bosses the ability to impose a particular religious belief on their employees, what you do is you’re restricting the religious liberty of those employees,” said Moshenberg, whose group was one of eight Jewish groups that joined an amicus brief led by Americans United for Separation of Church and State.

“It’s a slippery slope, people think abortion and birth control are big issues,” she said. “But so is blood transfusion. There are people who have deeply held religious beliefs about LGBT rights, children born out of wedlock, vaccines, medical interventions.”

Diament said the slope slipped both ways, noting that the restrictions imposed on Hobby Lobby could apply to a small kosher butcher.

“The slippery slope on the other direction, that was highlighted by Alito’s question on kosher slaughter which the government did not have a good answer for,” he said.

Rabbi David Saperstein, who directs the Reform movement’s Religious Action Center, said the analogy with kosher butchers was flawed because businesses like those “go to the very core” of a community’s religious beliefs, while Hobby Lobby’s business was not an expression of its owners’ faiths.

Marc Stern, the general counsel for the American Jewish Committee, said his group decided not to join the Americans United brief because it disagreed with the argument that for-profit businesses lacked protections.

“What some have done cavalierly is say we don’t care about the religious beliefs of the employer,” he said.

Instead, AJC filed its own amicus brief that argued against Hobby Lobby more in terms of the relative burdens of the employer and the employee.

‪Noting the small proportion of businesses’ health payments that would actually go for birth control, Stern said the costs of covering contraceptives was “negligible” for employers compared to the cost to women of not being able to afford such coverage on their own.

“The ability of women to function as full members of the economy is dependent on their ability to regulate their fertility,” he said.‬