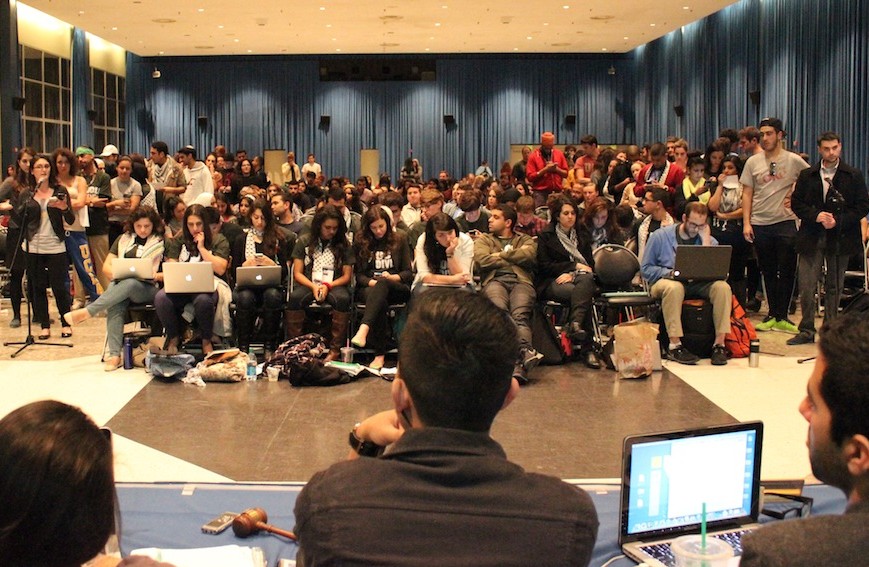 Members of UCLA's student government listen to supporters and opponents of a divestment resolution targeting Israel in a session that stretched into the early morning hours of Feb. 26, 2014. (Courtesy of StandWithUs)
Advertisement

Members of UCLA’s student government listen to supporters and opponents of a divestment resolution targeting Israel in a session that stretched into the early morning hours of Feb. 26, 2014. (Courtesy of StandWithUs)

“There’s been a significant increase in divestment votes,” said Max Samarov, a senior research assistant with the Israel advocacy group StandWithUs. “I think activists were using previous years to test the waters and are now rolling divestment out as a truly national strategy.”

The divestment measures proposed to student governments generally strongly criticize Israeli policies and urge universities to divest themselves of investments in companies doing business with the Israeli military or with West Bank settlements. Their significance is largely symbolic, since they are not binding on universities.

Last academic year, the bulk of the votes took place at California universities, most of them large public schools, several of which approved divestment. This spring, many of the votes have been on campuses in other states.

Pro-Palestinian groups see themselves as making headway on campus.

“There’s more and more campuses that are taking up this issue,” said Ramah Kudaimi, membership and outreach coordinator of the U.S. Campaign to End the Israeli Occupation. “We’ve welcomed 10 to 15 new student groups in the past year.”

On campus after campus, student government meetings to discuss divestment resolutions have been heated affairs often stretching into the night. But with only a couple exceptions, student governments this academic year have rejected divestment measures, a worse showing than the previous year for pro-Palestinian activists.

“In terms of actually winning votes, it’s been an overwhelmingly unsuccessful year for divestment activists,” Samarov said. “They may consider it a success because they’ve managed to introduce more total resolutions at more total universities in this country, but at the same time, the anti-divestment movement on campuses has become more cohesive and more prepared to push back.”

“This resolution caused harm among the student community,” Guerrero wrote in a March 26 letter to the student body. “In supporting such resolutions, we run the risk of isolating students from the resource we intend to be.”

At many schools, divestment votes have spurred tensions between supporters and opponents.

At the University of Michigan, a divestment motion that was tabled initially went to a vote after pro-divestment students staged a weeks-long sit-in to bring the measure to the floor. Jewish students there organized an “Invest in Peace” campaign and emailed student representatives to lobby them during the period.

“In those weeks, the campus climate was extremely tense,” the Michigan student government’s vice-president, Bobby Dishell, said in an emailed statement. “The environment was also very tense during the vote itself.”

At the University of California, Los Angeles, a divestment resolution was brought to the student government in February by the campus chapter of Students for Justice in Palestine.   Jewish students with a broad spectrum of views opposed the measure, which ultimately failed.

“We found out at the last minute,” Rabbi Shimon Brand, the Jewish chaplain at Oberlin, said of the Ohio college’s divestment resolution that passed in May 2013. “This was not normal procedure for the student senate.”

According to Brand, the divestment resolution arose in the Oberlin Student Senate after a student petition garnered some 200 signatures — a small fraction of the student body.

Students affiliated with the Oberlin Hillel gathered and worked out a strategy to oppose the measure.

Student speakers at the meeting managed to narrow the scope of the divestment resolution, he said. The resolution adopted by the Oberlin Student Senate applied to six specific companies that the resolution alleges “directly profit from the ongoing violations of international law and human rights.”

“Of course, Hillel and many of the students would have preferred divesting from nothing,” Brand said. “But we only found out at the last minute.”

“We found out 48 hours before that [the divestment resolution] was on the April 10 meeting agenda, although we had known that a resolution had been written,” Ossman said.

The meeting date, which was the Thursday immediately preceding Passover, ordinarily would have served as a travel day for many Jewish students heading home for seder. Nevertheless, Jewish student leaders at Cornell mobilized quickly.

“Student leaders met that day from about 5 p.m. to 3 in the morning at the multi-faith center where the Hillel offices are,” Ossman said. “They were here all day Thursday organizing materials, talking points and questions, getting the word out to students to come out and be present at the student assembly meeting and lobbying members of the student government to vote no.”

In the end, the resolution was tabled indefinitely following a meeting that ended in tension and invective. Weeks later, debate is ongoing on the Cornell campus.

“It’s important that the students are the voice countering this, not adults, not the outside organizations speaking on their behalf,” Ossman said. “This is their student-elected government, and they are the student voice of Israel on campus.”