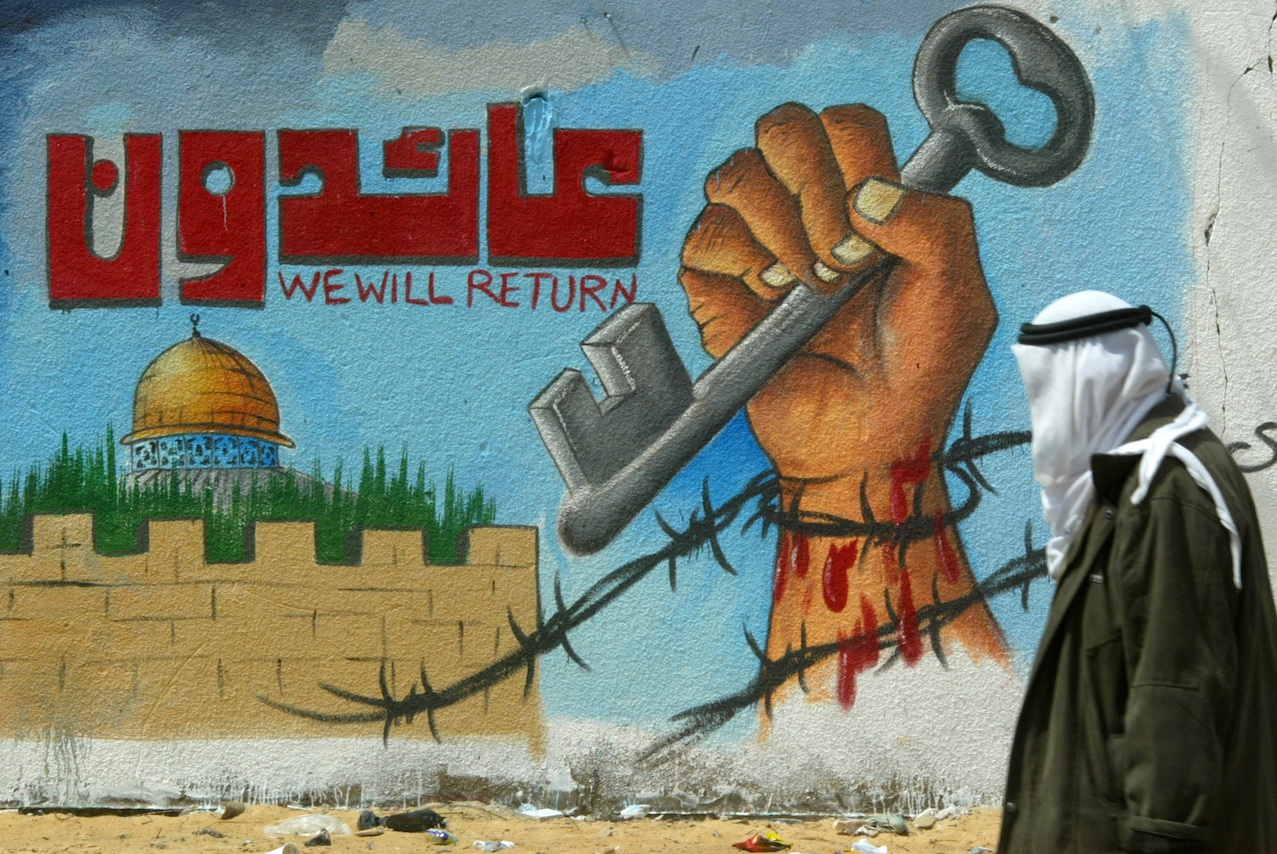 A Palestinian man walks front of graffiti that reads "Returning" on May 14, 2011 in Rafah in southern Gaza Strip during a gathering to mark the 63th anniversary of what Palestinians call the "Nakba," or the "catastrophe" of Israel's founding. (Abed Rahim Khatib/Flash 90)
Advertisement

JERUSALEM (JTA) — The State of Israel is celebrating its 66th birthday. For Israelis, Jews around the world and all supporters of Israel, this is a joyous occasion. By and large, even Israelis who are critical of some of their country’s policies nevertheless celebrate its remarkable accomplishments and contributions to the world.

Amid these celebrations, there is a minuscule group of Jewish Israelis who support Palestinian rejectionist ideology and identify with the “Nakba” (Arabic for “catastrophe”) narrative. The importance of this unrepresentative fringe is inflated far beyond its numbers due to support from some powerful Christian institutions, including Catholic frameworks.

For example, Zochrot (Hebrew for “remembrance”) is an Israeli NGO whose activities are made possible in large part through the support of European church aid agencies. It aims to “raise public awareness of the Palestinian Nakba” and to “recogniz[e] and materializ[e] the right of return.” In this way, Zochrot is overtly political, promoting a radical vision for the Middle East that does not include the right of the Jewish people to sovereign equality.

Zochrot supports the “one-state” framework and implementation of the Palestinian demand for a “right of return” of the millions of people who claim to be descendants of Palestinian refugees from the 1948 war. This directly contradicts the “two states for two peoples” formula supported by the international community, including the government funders of the church aid agencies that serve as Zochrot’s benefactors.

In this vision, Israel would become a bi-national entity with an Arab majority. Or as explained by Zochrot founder Eitan Bronstein, “When the refugees return, Jews will become a minority in the country. Israel as a Jewish state will change radically, and it will no longer be defined as such.” In this scenario, Jews would return to the pre-1948 predicament of everywhere being minorities, vulnerable to the whims of sometimes-hostile majorities.

For instance, Broederlijk Delen is a Flemish Catholic “development and peace” NGO. With a massive budget provided in part by the Belgian government, it funds many highly politicized NGOs active in the Arab-Israeli conflict, including Zochrot. In 2012, Broederlijk Delen gave 50,000 Euros to Zochrot, out of which 40,000 Euros originated with Belgian taxpayers.

This funding enables many of Zochrot’s activities. For example, the heads of this fringe group joined a 2012 trip to South Africa, sponsored by HEKS, in order “to learn from cases of expulsion and return.” Afterward, Zochrot co-published “The Cape Town Document,” which states, “It is our hope that the new political structure created in de-Zionized Palestine will be that of a single democratic state.”

More recently, in September 2013, Zochrot held a conference called “From Truth to Redress: Realizing the Return of Palestinian Refugees” to further spread its agenda of Israel’s disappearance. At the time, Zochrot’s funders sought to justify their support under the guise of promoting refugee rights and justice, reflecting a lack of due diligence and serious engagement by the funders.

It is startling that so many Christian groups fund an NGO that openly rejects Israel’s existence, the single most important manifestation of Jewish empowerment and self-determination in the world today. Such activities are clearly not conducive to Jewish-Christian reconciliation or to finding a realistic solution to the conflict. Instead, they echo the tortured history of Jewish persecution and marginalization in European Christian societies and the extreme demands of radical groups.

In a few weeks, Israel will welcome Pope Francis, who has long demonstrated his close ties with the Jewish people. It is hoped that he will send a powerful message of true peace by stating firmly and without equivocation that the vision of a world without Israel clearly contradicts church teachings. This is a message that the officials of powerful Catholic aid agencies who channel money to groups that demonize Israel will need to internalize.

(Emily Ziedman is the communications associate at NGO Monitor.)