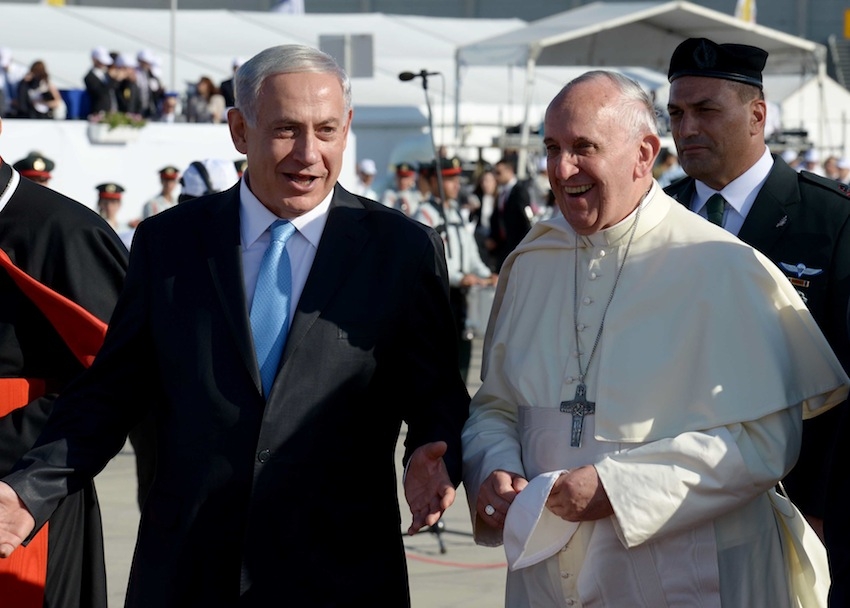 TEL AVIV (JTA) — Pope Francis has landed in Israel for a two-day visit.

The pope arrived Sunday afternoon at Tel Aviv’s Ben-Gurion Airport via a helicopter ride from Bethlehem, where he spent the morning. Francis will depart Israel on Monday.

“You have arrived in the State of Israel where today members of different religions and nationalities live together – Jews, Christians, Muslims, Druse and Circassians,” said Peres in an address upon the pope’s arrival. “Israel is a Jewish and democratic state where coexistence in peace is implemented, and a state that aspires for peace with all its neighbors. Even if peace calls for sacrifices, the sacrifices of peace are preferable to the threat of war.”

In Israel, the pope will visit Yad Vashem, Israel’s Holocaust memorial, as well as several holy sites in Jerusalem — including the Temple Mount, the Western Wall, the Church of the Holy Sepulchre and the Cenacle in Jerusalem, the traditional site of Jesus’ Last Supper. Jews consider the site to be King David’s burial place. He will also sign a joint declaration with Ecumenical Patriarch of Constantinople Bartholomew, who heads the Eastern Orthodox Christian church.

In Bethlehem Sunday, the pope called for an end to the Israeli-Palestinian conflict and referred to the “state of Palestine.” He also called for peace in a speech upon arriving in Israel.

“All of us must become the builders and constructors of this peace,” he says. “All men and women of this land, and the world at large, are asking us to work towards peace.”

He also invited Peres and Palestinian President Mahmoud Abbas to the Vatican next month for a prayer summit for peace. Peres and Abbas have accepted the invitation, according to reports, despite Israel’s suspension of negotiations with the Palestinian Authority last month.