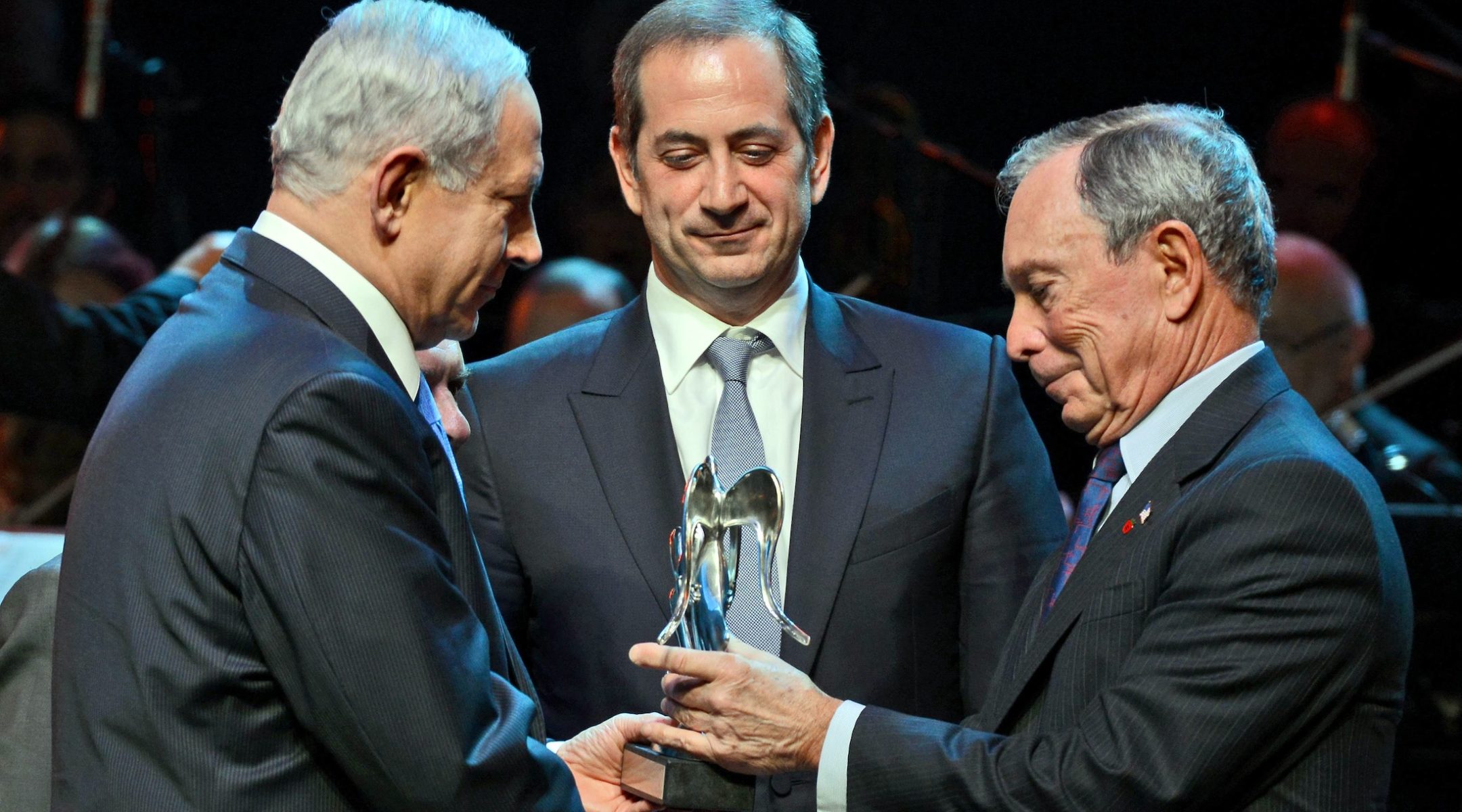 JERUSALEM (JTA) — There were ballerinas, a full dance ensemble, soloists, a harpist, a video tribute to Jewish luminaries in multiple fields, a multimedia orchestra performance celebrating the enduring light of creation, a speech from the prime minister, stand-up from Jay Leno, and an audience packed with top Jewish communal movers and shakers from both sides of the Atlantic.

Officially, it was a night at the Jerusalem Theater to honor former New York City Mayor Michael Bloomberg with the first $1 million Genesis Prize for embodying Jewish values in achieving excellence in the spheres of business, politics and philanthropy. Bloomberg made a day of it, appearing with Jerusalem Mayor Nir Barkat to discuss urban innovation and holding a briefing with the media before showing up for the grandiose ceremony to take home what some are calling the Jewish Nobel.

In his multiple day jobs, Bloomberg is used to occupying center stage, but in the Jewish world, not so much. Before becoming mayor in 2002, his public Jewish and Israel profile was admittedly limited as the founder of a major financial software and media company. And other than a handful of high-profile trips to Israel (accompanied by sizable philanthropic gifts to Israeli health care and emergency services), things didn’t change much during three terms as New York mayor.

So the festivities in Jerusalem provided a unique chance for official Jewishdom to celebrate Bloomberg as one of its own. But he wasn’t the only debutante at the ball — it was also a coming-out party of sorts for the organizers, the Russian businessmen-philanthropists behind the Genesis Philanthropy Group.

They have been on the scene for nearly a decade, but most of their philanthropic resources and energies have been dedicated to supporting Jewish identity-building initiatives for Russian-speaking Jews around the world. The launch of the Genesis Prize was aimed at influencing the wider Jewish world, inspiring Jewish pride among young people by shining a spotlight each year on one Member of the Tribe who has made a big impact in the world.

As with much of what they do, they did it big. For starters, there was the $1 million in prize money and a $100 million endowment to back it up, plus a formal partnership with the Prime Minister’s Office and the Jewish Agency for Israel. The prize selection process boasted two living Jewish legends, Natan Sharansky and Elie Wiesel. Then there was Bloomberg himself — and his willingness to embrace the role. And, finally, the packed celebration in Jerusalem.

Along the way, some commentators and communal insiders scratched their heads. Why do we need a Jewish Nobel? (Or, as Leno quipped, isn’t the Nobel the Jewish Nobel?) What exactly are the Jewish values being recognized? Isn’t there someone more deserving (or more in need of the money)?

Some answers emerged, but they will probably provoke as many questions as they resolved.

The prize honors a laureate “whose actions, in addition to their achievements, embody the character of the Jewish people through commitment to Jewish values, the Jewish community and/or to the State of Israel.”

Asked about what Jewish values he held dear, Bloomberg offered up honesty, charity, hard work and the responsibility to make the world a better place for future generations. Of course, he quickly added, they could just as well have been Christian, Muslim or Hindu values.

Bloomberg praised Israel and remarked fondly on his Jewish upbringing that set him on the path to success. But he noted repeatedly that the values he absorbed as a child could have come from any culture or religion.

“No one religion has a lock on great people or terrible people,” Bloomberg said at a news conference preceding the award ceremony. “The values I learned from my parents are probably the same values I hope Christians and Muslims and Hindus and Buddhists teach to their people.”

In selecting Bloomberg, the Genesis Prize selection committee chose a fellow billionaire who is perhaps better known for defending Muslim rights than Jewish ones. As mayor, Bloomberg was a strident defender of plans to build an Islamic cultural center near Ground Zero in Lower Manhattan, a controversy he brought up at the news conference.

Bloomberg has visited Israel several times, including in 2009, when he came to show solidarity with the country’s embattled towns during the Gaza war that year. Last week he paid tribute to the country, asking, “If the dream of Israel can be realized, what dream can’t be?” He dismissed anti-Israel boycotts as an “outrage.”

But he also made sure to emphasize his universalist bent.

“We are as one with this city and this country as we can be, to build a brighter future for everyone,” he said. “With enough hard work and faith in our convictions, we can build a better world for our children and their children.”

Bloomberg’s universalist pronouncements were in many ways echoed by Genesis officials.

Bloomberg had said last year that he would use the $1 million to promote Israeli-Palestinian business cooperation. But at the news conference, he said the Genesis group had dissuaded him from that course, urging him instead to fund the Genesis Generations Prize, which will provide 10 grants of $100,000 each to candidates with the best “big ideas” guided by Jewish values that benefit the world. Non-Jews will be eligible for the grants. In fact, at the briefing with reporters, Genesis Philanthropy Group co-founder and CEO Stan Polovets said he saw the day when a non-Jew would win the Genesis Prize.

In his address at the award ceremony, Genesis Philanthropy Group co-founder Mikhail Fridman said Judaism is a roadmap to success in life, with a unique ability to inspire innovation.

“Our forbearers have left us something far more valuable than land, castles or titles,” Fridman said. “They left us the word, the book and a set of values and rules which, if understood correctly and applied diligently, lead to the ultimate reward in life — a sense of fulfillment and self-actualization.

(With reporting by Ben Sales)