Palestinians avoid U.S. aid cutoff, but what happens when Hamas runs in elections? 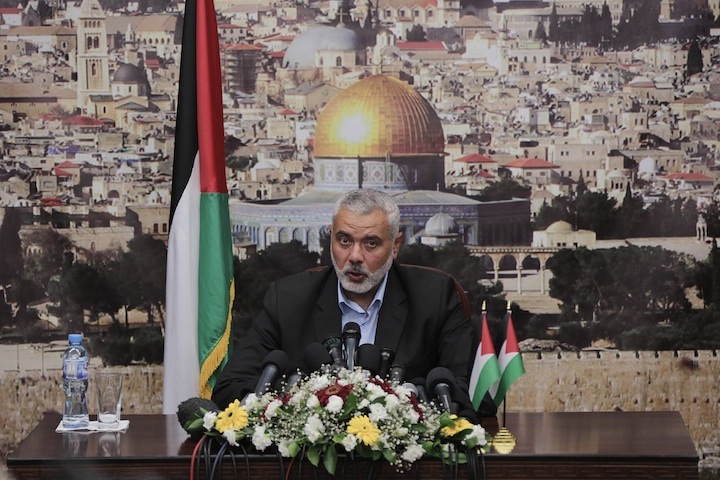 A range of American Middle East policy analysts and current and former U.S. officials say that Palestinian Authority President Mahmoud Abbas threaded the needle last week and created a government of technocrats untainted by Hamas and not subject to its influence, although Hamas has declared its backing of the government.

That could all change, however, if elections to replace the interim government are held in about six months, as the agreement between the Palestinian factions requires. Not only could elections bring Hamas to power, or at least into a unity government, but its very participation in the elections may violate the terms of U.S. dealings with the Palestinians.

Speaking on condition of anonymity, a State Department official involved in U.S.-Palestinian relations told JTA this week that U.S. intelligence agencies had assessed that none of the new Palestinian Cabinet ministers have any Hamas involvement, and so continued relations would not violate U.S. law banning interactions with designated terrorist groups.

Elliott Abrams, the deputy national security adviser to President George W. Bush, said this Palestinian government did not present the same dilemmas that he and other Bush administration officials faced in 2006 when Hamas won parliamentary elections while Abbas was president.

“In 2006 we had a parliamentary system in which Hamas won the majority and therefore State Department lawyers told us the Palestinian Authority is under the control of a terrorist group,” Abrams told JTA. “Not today — what we have today is a non-party government.”

The State Department said last week that the U.S. would continue to deliver assistance to and work with the interim government. The announcement drew expressions of outrage from Israeli Prime Minister Benjamin Netanyahu, who has called for the new Palestinian government to be isolated because of Hamas’ backing.

Abrams said the United States should continue to deal with the new government.

But the Israeli government is holding firm to its position.

Republicans and Democrats in Congress have expressed unease with the Obama administration’s decision to maintain ties. The leading Democratic and Republican members of the U.S. House of Representatives Middle East subcommittee sent a letter to Secretary of State John Kerry on Monday saying they would convene a hearing to hear explanations from administration officials.

“Any decision to work with this unity government could be extraordinarily counterproductive in our efforts both to promote peace and to help support the security of our ally Israel,” said the letter from Reps. Ileana Ros-Lehtinen (R-Fla.), the committee’s chairwoman, and Ted Deutch (D-Fla.), its top Democrat.

Outside of peace talks, however, Israel is maintaining relations with the Palestinian Authority, transferring customs duties to the P.A. and continuing to coordinate with its security services, among other interactions.

“They have taken a hard line publicly,” the State Department official said of the Netanyahu government. “But our understanding is that it continues to maintain close security cooperation.”

But once elections get underway, Israel may not be as inclined to continue to work with the P.A., said Nathan Brown, a George Washington University professor of political science.

“For elections to work, both sides would have to operate politically, and I don’t know how you square that with security cooperation,” Brown said. “It would be necessary for the West Bank security forces to ease up on Hamas. The second they do that, the Israelis would object.”

Jonathan Schanzer, a vice president at the Foundation for Defense of Democracies, said elections would legitimate Hamas and pave the way for what he called the “Lebanonization” of the Palestinian polity, referring to the outsized influence that Hezbollah, an armed militia, has in Lebanon.

Schanzer, a former terrorism finance analyst at the Treasury Department, said he anticipated a “central government itself weak and susceptible to the military adventurism of Hamas.”

“Should elections be held and Hamas is a participant, it is a dangerous message that the United States and Abu Mazen are sending that this is a legitimate actor,” he said, referring to Abbas.

Matt Duss, a Middle East analyst at the Center for American Progress, a think tank with close ties to the Obama administration, agreed that Hamas’ entry into government posed a danger as long as it maintained a separate militia.

“It’s impossible not to see the possibility of Lebanonization when you have anyone entering the government with security forces,” he said.

Abrams, citing the 1993 Oslo agreements that are the basis for Israeli-Palestinian peace talks and for the Palestinian Authority, said Hamas may even be precluded from running in elections. The agreements ban parties that “commit or advocate racism” and use unlawful or undemocratic means to achieve their ends.

“In my view the real worry is the election and repeating the mistake the Bush administration made and going along with election of Hamas,” Abrams said.

Israel, Abrams said, would be better served dealing with the interim government and trying to keep Hamas from running.

“I wish the Israelis would go along with that and work with the European Union and the United States in barring Hamas from participating,” he said.

The State Department official said Abbas’ strategy in moving to elections was to strengthen his Fatah faction.

“Abbas has been pretty clear that his whole purpose in doing this is to marginalize Hamas,” the official said. “We think Abbas has pursued the interim government to weaken Hamas, not to strengthen it.”

Abrams chuckled when he heard this was a strategy embraced by the administration.

“Boy, does that sound familiar to me,” he said, recalling that bolstering Fatah’s preeminence was precisely the strategy in 2006 when then-Secretary of State Condoleezza Rice pressed for Palestinian elections.

Still, Abrams noted that polls of Palestinians suggest that such an aim may not be so quixotic. Hamas is unpopular and has been weakened by the hostility of the new military-backed leadership in Egypt, which reviles the Palestinian Islamist group. On the other hand, he said, the factors that made Fatah unappealing in 2006 have not changed.

“Fatah is completely unreformed,” he said, referring to its system of patronage.

David Pollock, a fellow at the Washington Institute for Near East Policy, said that at least until the elections, an advantage for the United States and Israel in the arrangement is that it could allow Fatah to keep a closer eye on Hamas.

“If the U.S. continues funding, one can make a convincing case this is not helping Hamas,” Pollock said. “On the contrary, it is helping the P.A. keep tabs on Hamas in the West Bank.”