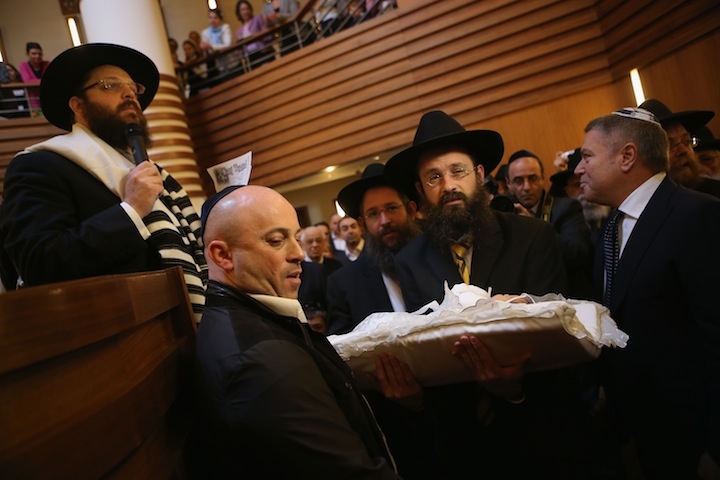 An infant is carried before his circumcision at an Orthodox synagogue in Berlin in 2013. (Sean Gallup/Getty Images)
Advertisement

(JTA) — The leader of Norway’s Jewish community praised his country’s parliament for passing an act regulating ritual circumcision for boys.

“The act changes the paradigm of the debate about ritual circumcision in Norway in a very positive way and is therefore very significant,” Ervin Kohn, president of the Jewish Community in Oslo, told JTA Friday. “I am proud of my parliament and country for making the right decision, that will put Norway on the path to becoming a place where neonatal circumcision is a common practice, like in the United States.”

The act was adopted last week in a vote by the Standing Committee on Health and Care Services of the Stortig, the Norwegian parliament. Submitted by Health Minister Bent Hoie amid a polarizing debate about the legal status of non-medical circumcision of boys under 18, the draft act was aimed at establishing practices that would settle the legal question around the custom, Hoie said.

The Act on Ritual Circumcision of Boys does, however, places limitations on the custom, which is known among Jews as brit milah and is performed on Jewish babies at the age of eight days. It stipulates that the procedure must be performed under the supervision and in the presence of a licensed physician, but it may be physically carried out by other persons.

Only two of the committee’s 20 members opposed passing the act, said Kohn, whose community has several hundred members.

The passage of the act comes amid a campaign by secularists and other activists in Scandinavia — including the children welfare ombudsmen of all Nordic countries — to ban ritual circumcision because they say it violates children’s rights to physical integrity and is comparable to female genital mutilation.

Far-right groups in Norway and elsewhere in Scandinavia, meanwhile, oppose the custom also on the grounds that they regard it as a foreign element in Nordic societies, which they say are under threat from immigration from Muslim countries.