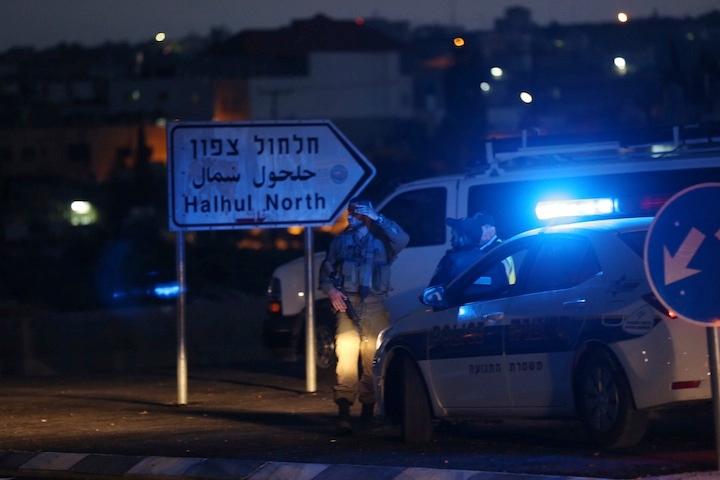 Israeli soldiers are seen in the Palestinian village of Halhul where the bodies of three Jewish teenagers -- Eyal Yifrach, Naftali Fraenkel and Gilad Sha'ar -- were found in a nearby field, June 30, 2014. (Nati Shohat/Flash 90)
Advertisement

JERUSALEM (JTA) — The bodies of three kidnapped Israeli teenagers were found in the West Bank in a field north of Hebron.

The families of Gilad Shaar, Naftali Frenkel and Eyal Yifrach had been notified of the discovery, the Israeli media said at about 8:30 p.m. Monday. The bodies were positively identified.

It is believed that the bodies were dumped in haste and covered quickly. The teens reportedly were killed shortly after they were abducted on June 12.

The teens were last seen trying to get rides home from a junction in Gush Etzion, a bloc of settlements located south of Jerusalem.

One of the teens, Naftali Frenkel, is a dual American-Israeli citizen.

President Obama in a statement offered condolences to the teens’ families on behalf of the American people.

“As a father, I cannot imagine the indescribable pain that the parents of these teenage boys are experiencing,” he said. “The United States condemns in the strongest possible terms this senseless act of terror against innocent youth.”

Obama called on Israel and the Palestinian Authority to continue to work together to find the murderers.

“I also urge all parties to refrain from steps that could further destabilize the situation. As the Israeli people deal with this tragedy, they have the full support and friendship of the United States,” he said.

Israeli television showed images of relatives and friends flooding the homes of the families shortly after a gag order was lifted and the discovery reported.

Shortly after the news was made public, rockets were fired from the Gaza Strip on southern Israel.

Israel’s Shin Bet security service and the Israel Defense Forces on Thursday identified two West Bank Palestinian men affiliated with the terrorist group Hamas, Amer Abu Aysha and Marwan Kawasme, as the alleged kidnappers. The suspects, who live in Hebron, have been missing since the kidnapping.

The bodies were found by a volunteer civilian search team working with an elite Israeli army unit on land belonging in the Kawasme family. The bodies, which were tied up, reportedly were in poor condition when they were discovered.

Israeli Prime Minister Benjamin Netanyahu in a Facebook post said, “Hamas is responsible and Hamas will pay.” He called the victims “pure and young.”

Israeli politicians weighed in with their thoughts about the teens and the fight against terror.

President Shimon Peres, who made a plea to President Obama last week in the United States to help find the boys, said, “Alongside the deep mourning, we remain determined to bring down an iron fist on the criminal terrorists. Our war against terror will only grow and not weaken so that the murderous terrorists will not dare to raise their heads. At this difficult hour, I warmly embrace and strengthen the hands of the mothers, the wonderful fathers and family members of Naftali, Gilad and Eyal.”

“What we feared has come to pass,” he said. “Our fear was deep but we carried in our hearts the hope that even murderous terrorists would spare the teens.”

And from Isaac Herzog, the opposition leader and Labor Party head: “The kidnapping and murder of innocent boys under cover of night is a despicable and unforgivable crime. There is no justification or excuse, and I am convinced that the long arms of the security forces will reach the murderers.”

Hamas warned Israel against taking revenge for the murders.

“If the occupiers carry out an escalation or a war,” Hamas spokesman Sami Abu Zuhri told the French news agency AFP, “they will open the gates of hell on themselves.”