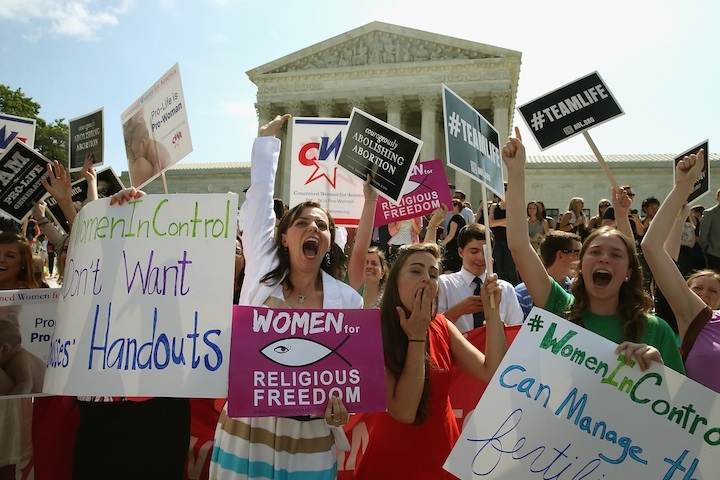 In ruling that closely owned corporate firms with religious objections do not have to provide contraceptive coverage in their employee health plans, the majority based its decision on the Religious Freedom Restoration Act of 1993.

“They’ve opened up a Pandora’s box through corporations claiming religiously motivated exemptions against an array of rules and regulations the government passes to enhance the public welfare,” Rabbi David Saperstein, director of the Reform movement’s Religious Action Center, said in an interview.

But the Orthodox groups that had joined an amicus brief backing Hobby Lobby and Conestoga praised the decision.

“The Court’s ruling stands for the proposition that — even when the government seeks to implement valuable policy goals — it must do so without trampling upon the conscientious beliefs of American citizens, especially, as is the case here, when there are many other ways to meet the policy goals without infringing on religious liberty,” Nathan Diament,  director of the Orthodox Union’s Washington office, said in a statement.

Both sides referred to the law that undergirded the conservative majority’s decision authored by Justice Samuel Alito.

“We believe deeply in RFRA and robust religious liberties,” he said. “We believe the court was wrong in saying there are religious claims corporations can make. Corporations don’t have souls or consciences the way that people or associations of like-minded people do.”

Diament had a much different perspective on the law.

“RFRA is about keeping the government from inhibiting people’s practice,” he said in an interview. “It doesn’t mean employees can have their employers’ religion imposed upon them, it means the government can’t force employers to violate religious beliefs.”

But even Jewish groups that are critical of the ruling are standing by RFRA. Nancy Kaufman, the CEO of the National Council of Jewish Women, said the slippery slope she now feared was in the ruling, not the law.

“RFRA was not a mistake because it was designed to help protect individual people’s religious freedom -– we worked hard for its passage,” she said in an email to JTA. “The problem is that the court has granted closely held corporations (without really defining what that is) religious freedom even when it means that it would take away religious liberty from their individual workers who are ‘people’.”

Rabbi Abba Cohen, the Washington director of Agudath Israel of America, another Orthodox group that sided with the two corporations in the case, applauded the court for balancing the freedoms of employers and employees.

“We are all too familiar with the problem from the perspective of the employee, who often must choose between his religious beliefs and his livelihood,” he said in a statement. “But the problem is no less compelling from the employer’s point of view, where that Hobson’s choice may likewise force him or her to sacrifice either his religion or his business.”

Liberal Jewish groups said the decision’s broader implications were troubling and could lead to chaotic menus of what might and might not be available to employees.

“While the majority’s assertion that the ruling is limited solely to the contraception mandate is worth noting, we are troubled that it may be used by corporations seeking to impose other religious beliefs on employees,” the Anti-Defamation League said in a statement.

Alito in his decision took pains to confine the ruling to contraceptive coverage.

“This decision concerns only the contraception mandate and should not be understood to hold that all insurance-covered mandates, e.g., for vaccinations or blood transfusions, must necessarily fall if they conflict with an employer’s religious beliefs,” he wrote.

Ruth Bader Ginsburg in her dissent for the four liberal justices chided Alito, arguing that the declaration that religious exemptions not having to do with contraception would be turned away under the ruling does not necessarily make it so.

“The court, I fear, has ventured into a minefield,” she said, a phrase that a number of groups, including the ADL, echoed in their statements.

“Approving some religious claims while deeming others unworthy of accommodation could be ‘perceived as favoring one religion over another,’ the very ‘risk the Establishment clause was designed to preclude,’ ” Ginsburg wrote, citing Supreme Court precedents.

Kaufman of the NCJW said in an interview that Alito’s distinction between contraceptive coverage and vaccinations or blood transfusions relegated women’s health needs to second class.

“It’s really saying contraception is not health care,” she said.

Despite their misgivings, the Reform and Conservative movements saw in the narrow ruling a way toward restoring coverage: Alito wrote that the government had failed to persuasively distinguish privately held companies from religious nonprofits, which have been granted a workaround under Department of Health and Human Services regulations, and that the same workaround could be extended to the privately owned companies.

The government “could extend the accommodation that HHS has already established for religious non-profit organizations to non-profit employers with religious objections to the contraceptive mandate,” Alito wrote.

“That accommodation does not impinge on the plaintiffs’ religious beliefs that providing insurance coverage for the contraceptives at issue here violates their religion,” Alito wrote.

That prompted a degree of hope from the Reform and Conservative movements.

“We urge that this decision be read more narrowly to hold that it is only permissible to accommodate a ‘closely held private corporation’s’ religious beliefs about contraception to the extent that there is a readily and easily implementable alternative to provide all contraceptive options to affected employees,” Rabbi Julie Schonfeld, the executive vice president of the Conservative movement’s Rabbinical Assembly, said in a statement.

Saperstein of the Religious Action Center also saw that aspect of the ruling as an avenue to restoring contraceptive coverage.

“The court did not do anything to inhibit the government’s ability to create a mandate for health care coverage and contraception” under the terms that now govern religious nonprofits, he said.

Using the nonprofit workaround would be a solution that the Orthodox Union would welcome, Diament said in an interview, noting that Orthodox groups had opposed the mandate not because of objections to contraceptive coverage but because of the broader issue of requiring compliance with practices that violate a religion.

“The key point in this particular case is that it’s very clear that the government has other channels to serve its goal of getting women to have access to contraception,” he said.

Marc Stern, the general counsel for the American Jewish Committee, which signed onto a friend-of-the-court brief in support of the Obama administration’s position, said it was unclear from the court’s ruling how the nonprofit workaround could be applied to privately owned companies.

“It’s an untested plan with uncertain costs and uncertain ability, given the importance of the availability of contraception,” he said.

Alito wrote that his ruling does not cover publicly traded corporations such as IBM.

The National Council of Jewish Women and the ADL said they would back legislative redress, something Obama spokesman Josh Earnest also anticipated, but with the Republican majority in the U.S. House of Representatives, the passage of a bill that enshrines a contraceptive coverage mandate is unlikely.

One bill that has such provisions, the Women’s Health Protection Act, has a 4 percent likelihood of passage, according to govtrack.us, a legislation monitor.