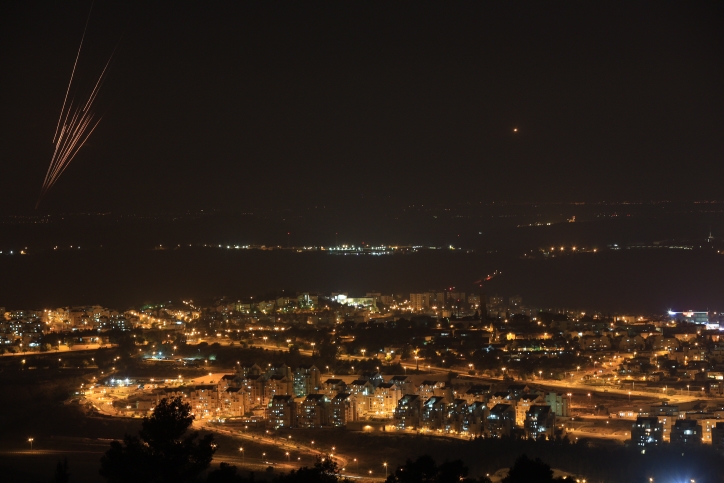 Rockets fired by Gaza Palestinians can be seen in the night sky over southern Israel, July 8, 2014. (Nati Shohat/ Flash90)
Advertisement

JERUSALEM (JTA) — At least one rocket fired from Gaza struck Jerusalem as Code Red warning sirens sounded in the city and throughout Israel’s center and south.

The Israeli military confirmed that one rocket hit Jerusalem but did not say where. Among conflicting media reports, one said a home was damaged in the attack. No injuries were reported.

A photo posted on Twitter by United Hatzolah showed a rocket that landed in Givat Zeev, a West Bank Jewish settlement located near Jerusalem.

Along with Jerusalem, the sirens were heard in central Israeli cities such as Netanya, Kfar Saba, Raanana and areas around Tel Aviv including  Rishon Lezion, Bat Yam, Holon and Bnei Brak at approximately 10 p.m. Tuesday, as well as in communities across the south. They also were heard in northern Israel in Binyamina.

Two rockets were intercepted over Tel Aviv by the Iron Dome missile-defense system on Tuesday evening.

Before the countrywide barrage of rockets, Israeli Prime Minister Benjamin Netanyahu said in a statement, “Israel will not tolerate the firing of rockets on our cities and towns. No other country lives under such a threat, and no country would accept such a threat.”

Israel in the wee hours of Tuesday launched Operation Protective Edge to stop the firing of rockets on Israel — what Netanyahu called a “significant expansion” of the military’s operation against Hamas and other terrorist organizations in Gaza. He joined Defense Minister Moshe Yaalon in urging Israelis to be patient, saying the operation “can take some time.”

The White House on Tuesday slammed the rocket attacks against Israel.

“We strongly condemn the continuing rocket fire inside of Israel and the deliberate targeting of civilians by terrorist organizations in Gaza,” White House spokesman Josh Earnest told reporters. “No country can accept rocket fire aimed at civilians and we support Israel’s right to defend itself against these vicious attacks.”