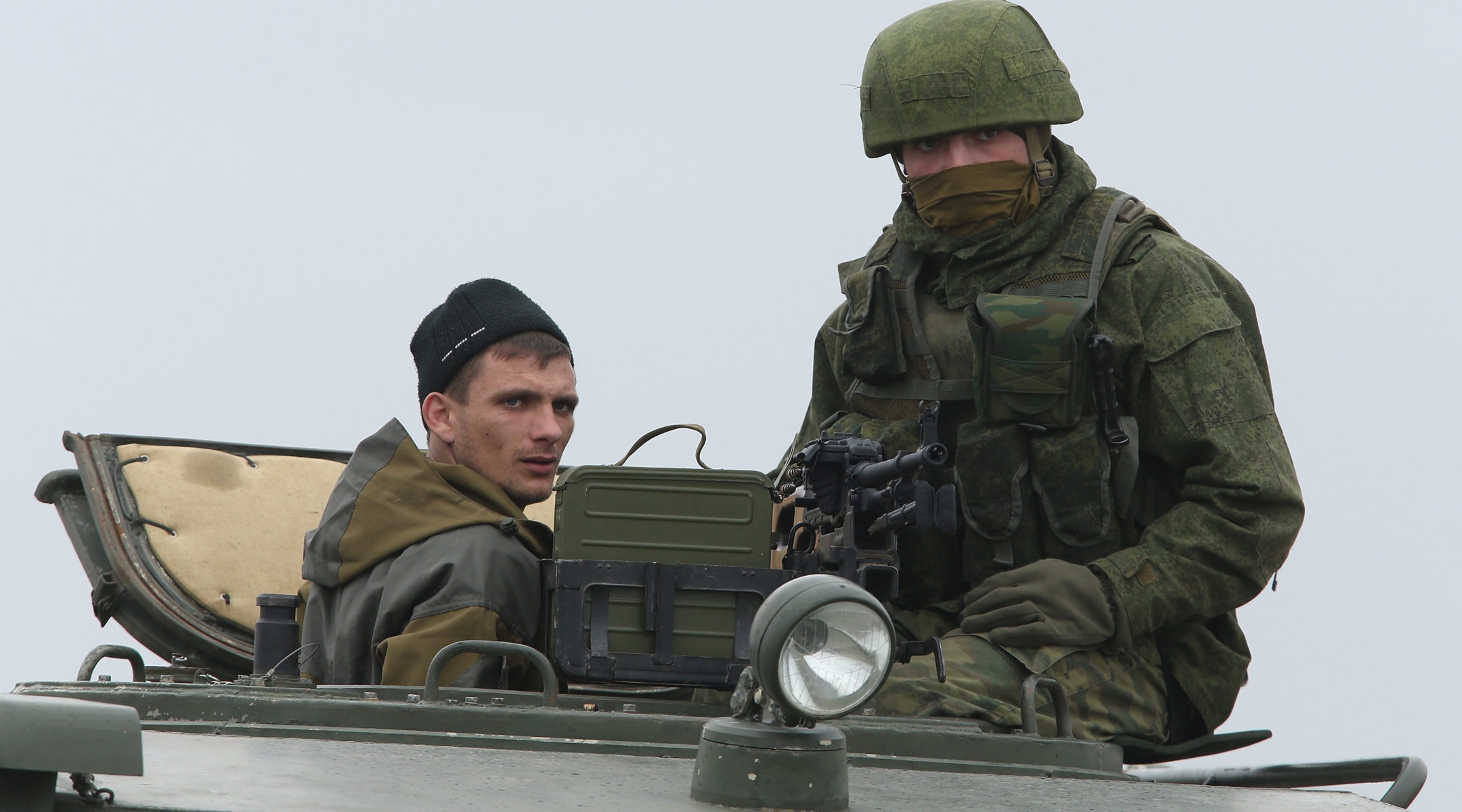 Soldiers under Russian command look on from a military vehicle at the Russian occupied Belbek airbase as Russian-led troops blockaded a number of Ukrainian military bases across Crimea, on March 4, 2014 in Lubimovka, Ukraine. Ukrainians troops, stationed at their garrison nearby, confronted the Russian soldiers unarmed today. The Russian-led troops fired their weapons into the air but then granted Colonel Yuli Mamchor, commander of the Ukrainian military, negotiations with their commander. (Sean Gallup/Getty Images)
Advertisement

(JTA) — A Jewish mother and daughter were killed in a shelling in the embattled eastern Ukraine city of Lugansk.

The victims of Friday’s explosion were identified on the website of the Lugansk Jewish community as Svetlana and Anna Sitnikov.

Svetlana Sitnikov, 57, and her daughter Anna Sitnikov, 31, were going to buy shoes, according to Zelig Brez, a leader of the Jewish Community of Dnepropetrovsk. They were to take along Anna’s 4-year-old son, Vadim, but at the last moment his grandfather took the boy. Five minutes later came the explosion, Brez said.

“They were among the most active members of the community,” he said.

Rabbi Shalom Gopin, Chabad’s emissary to Lugansk, was trying to bring the deceased to burial but was waiting on authorization from city officials, the news site ch10.co.il reported Sunday. Gopin was not immediately available for comment.

Lugansk is among a number of cities in eastern Ukraine where the government is fighting pro-Russian separatists who took up arms after the ousting in late February of President Viktor Yanukovych in a revolution that erupted several months earlier over his alleged corruption and close ties with the Kremlin in Russia.

Since fighting erupted, the American Jewish Joint Distribution Committee and the Jewish Community of Dnepropetrovsk have helped more than 650 flee battle zones in eastern Ukraine, settling them in community institutions or providing alternative housing solutions in addition to food, medicine and counseling to help children cope with trauma.