From Israel, a Holocaust survivor worries about her Gazan daughter 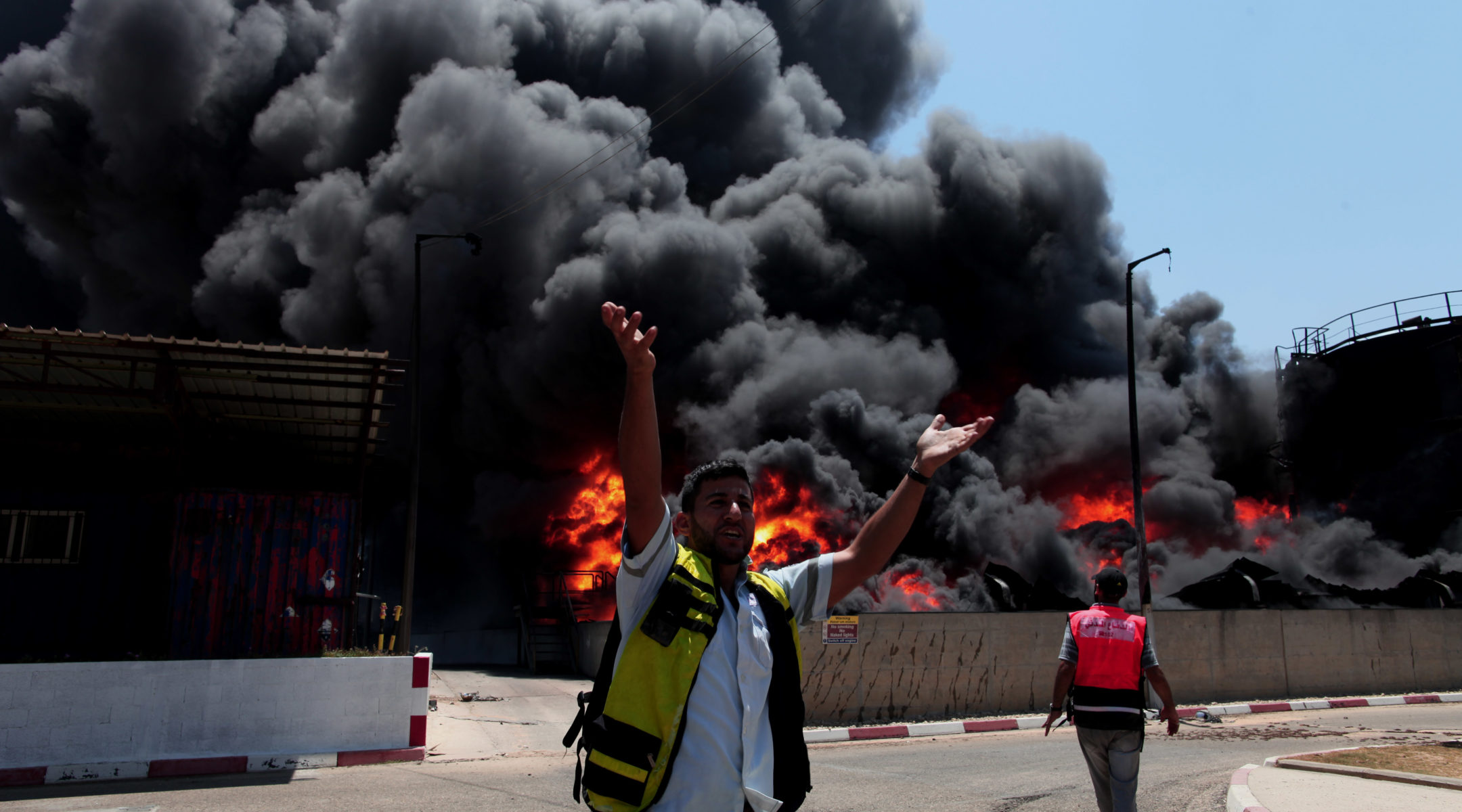 RAMLE, Israel (JTA) — In her living room in the Israeli town of Ramle, Sarah says she wants a peaceful life. At 79, she deserves one.

A Hungarian-born Holocaust survivor, Sarah was sent to a Nazi concentration camp in Serbia as a child, arriving in Israel at age 17. Her entire family perished in the Holocaust.

Now she watches from her armchair as her family is threatened once again. Sarah — not her real name — is now a Muslim, and her daughter lives in Gaza City.

“The whole city is in ruins,” Sarah says. “Everyone is just trying to find a piece of bread.”

Sarah arrived in Israel in 1950, one of the tens of thousands of Jewish survivors who found refuge in the young Jewish state. From there, her story departs from the conventional narrative.

In 1962, she married an Arab Israeli and, with no surviving family of her own, converted to Islam to join his. Neither of them were particularly religious.

“In my time it wasn’t Arab or Jew,” said Sarah, who speaks Hebrew with a slight European accent. “We knew there was no problem between Jews and Israeli Arabs. I’m very liberal; my husband was the same. We felt no discrimination.”

Light-haired and soft-spoken, Sarah has lived for decades in the same Ramle apartment, which she now shares with her daughter, Nora. Both women leave their hair uncovered, and Nora said not to worry as she set out tea and cookies on the last day of Ramadan. She wasn’t fasting.

Sarah’s other daughter, also an Israeli citizen, moved to Gaza in 1984 after she married. On Sunday, Sarah and Nora waited by the phone as the Arabic news network Al Jazeera played on the television.

In the first days of Israel’s Operation Protective Edge, Sarah’s daughter took her six children and one grandchild and fled their home in the Zeitoun district of Gaza City for a calmer area in the southern Gaza Strip. The day they left, their four-story home was destroyed, most likely by an Israeli airstrike. Since then, the family has survived on dry goods and whatever they can scrounge up during brief cease-fires.

Along with food, electricity is scarce in Gaza, so Sarah has a hard time getting in touch with her daughter. She learned the house was destroyed only when another relative posted on Facebook a picture of the rubble. She hopes for the rare phone call when her daughter manages to charge her phone. But sometimes, no call at all is better.

“With every phone call, we pray that she’s charged so we can reach them, talk to them, see how they are,” said Nora. “Every call jolts us, that we won’t hear bad news.”

Neither women would agree to be photographed or give many personal details out of fear of retribution from Israeli authorities or Hamas, the reigning power in Gaza. Only Nora would give her first name.

Though they have lived through such conflicts before — Protective Edge is the third such campaign in Gaza in six years — Sarah says this round has been harder than previous ones. Anti-Muslim discrimination flared up during previous conflicts, but Sarah said the antagonism seems stronger this time.

“I go to day centers [for the elderly], and they don’t talk to me,” Sarah said. “Behind my back, they curse me. I hear it. I hear ‘Their name should be erased. They should die.’”

Sarah and Nora used to enjoy driving to Gaza City to visit Sarah’s daughter. But Nora hasn’t been allowed to visit since the signing of the Oslo Accords in 1993. Sarah was allowed only once, for a five-day visit several years ago.

Will the family return to Zeitoun to rebuild its home? When will Sarah’s daughter be allowed to visit the family in Ramle? Will Sarah ever be able to visit her grandchildren and great-grandchild in Gaza?

Is there still hope for peace? At that question, Nora shakes her head.

“Honestly, no. I don’t think the situation will get better after this war,” Nora said. “There’s tension between me and my Jewish friends. They want to justify themselves and this war. I never encounter a person that says, ‘Enough spilled blood’ or ‘Poor civilians.’ I haven’t heard that.”

Like most Israelis, Nora has coped with the sirens that warn of incoming missiles for a month now. She opposes Hamas, she says, and understands that Israel needs to protect its citizens, though she wishes the government would scale back its operation and pursue diplomacy more aggressively. Her family in Gaza, she said, is not affiliated with any movement — not Hamas, not Fatah, not any other.

“Israel has the full right to self-defense,” Nora said. “The missiles don’t differentiate between Jew and Arab. We don’t need to see houses destroyed, women crying, dead soldiers. A soldier is the son of a mother. Anywhere in the world, the pain of a mother is the same pain.”

Both Sarah and Nora say they support a two-state solution to the Israeli-Palestinian conflict. Both wish their Gaza family could visit Israel to eat Bamba and Bissli, the classic Israeli snack foods they love. Both wish they could hop into a cab and drive to Gaza City to eat fish on the coast.

But Sarah says that because of Hamas, because of the war, because of the antagonism born of decades of separation between Israelis and Palestinians, a hopeful future seems less likely than ever. She scoffed at the occasional peace negotiations.

“It’s all nonsense,” she said, then in Yiddish: “Bubbe meises.”