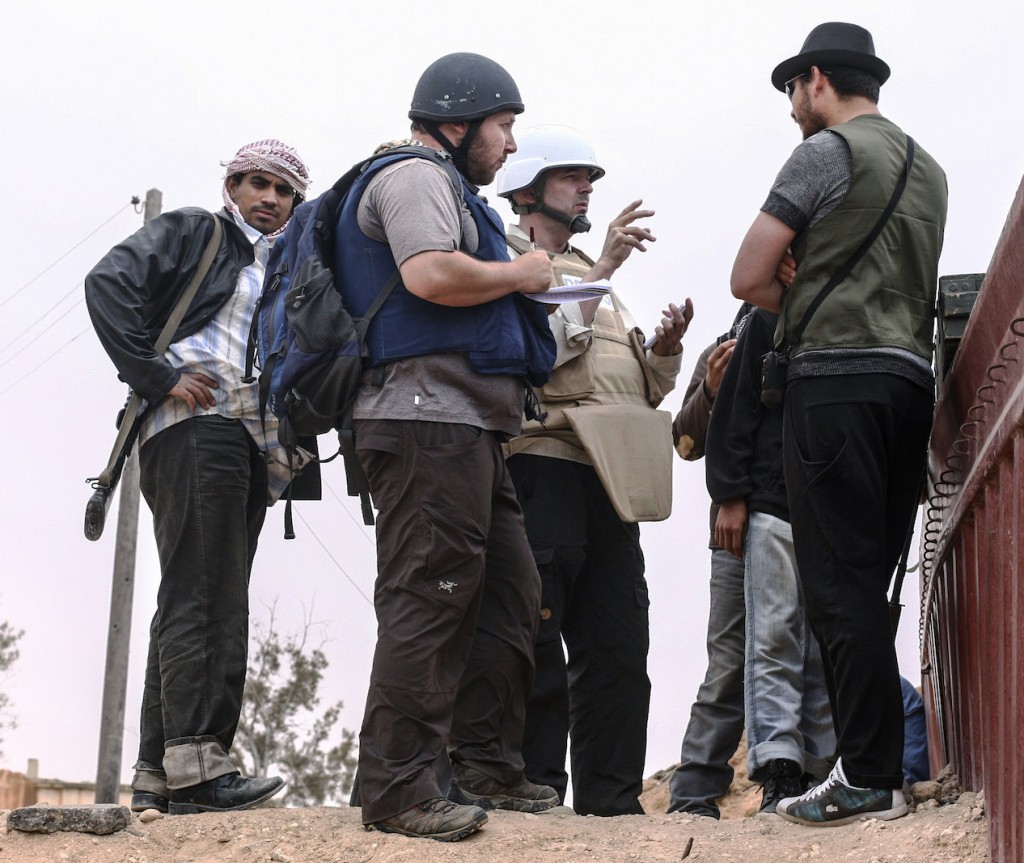 In this handout image made available by the photographer, American journalist Steven Sotloff, center with black helmet, talks to Libyan rebels on the Al Dafniya front line, 15 miles west of Misrata, June 2, 2011. Sotloff was kidnapped in August 2013 near Aleppo, Syria. (Etienne de Malglaive via Getty Images)

JERUSALEM (JTA) — Journalist Steven Sotloff, who was beheaded by the jihadist group ISIS, was a dual American-Israeli citizen and studied in Israel, Israel’s Foreign Ministry said.

The Foreign Ministry cleared for publication Wednesday that Sotloff, 31, held Israeli citizenship. His connections to Israel and the Jewish community reportedly had been sanitized from the Internet and social media in order to keep the information from his radical Islamic captors.

Sotloff, a grandson of Holocaust survivors who grew up in Miami, made aliyah in 2005 and studied foreign relations at the Interdisciplinary Center in Herzliya, a private college, Ynet reported. He then began reporting from countries throughout the Middle East, returning to Israel for the 2013 Maccabiah Games.

Sotloff was abducted on Aug. 4, 2013, after crossing the Syrian border from Turkey.

A hostage who was held with Sotloff and later released told the Hebrew daily Yediot Acharonot that Sotloff was able to fast last year on Yom Kippur without his captors knowing.

“He told them he was sick and did not want to eat, even though that day we were served eggs,” the fellow captive said. He added that Sotloff also was able to pray in a hidden manner and in the proscribed way facing Jerusalem by looking which way the Muslims prayed in order to determine the proper direction.

“The U.S. Intelligence Community has analyzed the recently released video showing U.S. citizen Steven Sotloff and has reached the judgment that it is authentic,” National Security Council spokeswoman Caitlin Hayden said Wednesday in a statement.

Sotloff is the son of Arthur and Shirley Sotloff. Shirley Sotloff has worked in the early childhood program at Temple Beth Am Day School in Pinecrest, Fla., according to the synagogue website. Last week, Shirley Sotloff pleaded in a video for his captors to have mercy on him.

Sotloff published articles from Syria, Egypt and Libya in various publications, including Time.com, the World Affairs Journal and Foreign Policy. He also freelanced for The Jerusalem Post and the Jerusalem Report magazine.

U.S. Secretary of State John Kerry in a statement Wednesday said Sotloff “was taken from us in an act of medieval savagery by a coward hiding behind a mask.”

Kerry went on to say, “Steven Sotloff’s reporting was as empathetic as his killers are evil. He focused on the stories of average people trapped in war, and documented their day-in and day-out struggle for dignity.”