How Jewish reporters in Muslim lands hide their identity 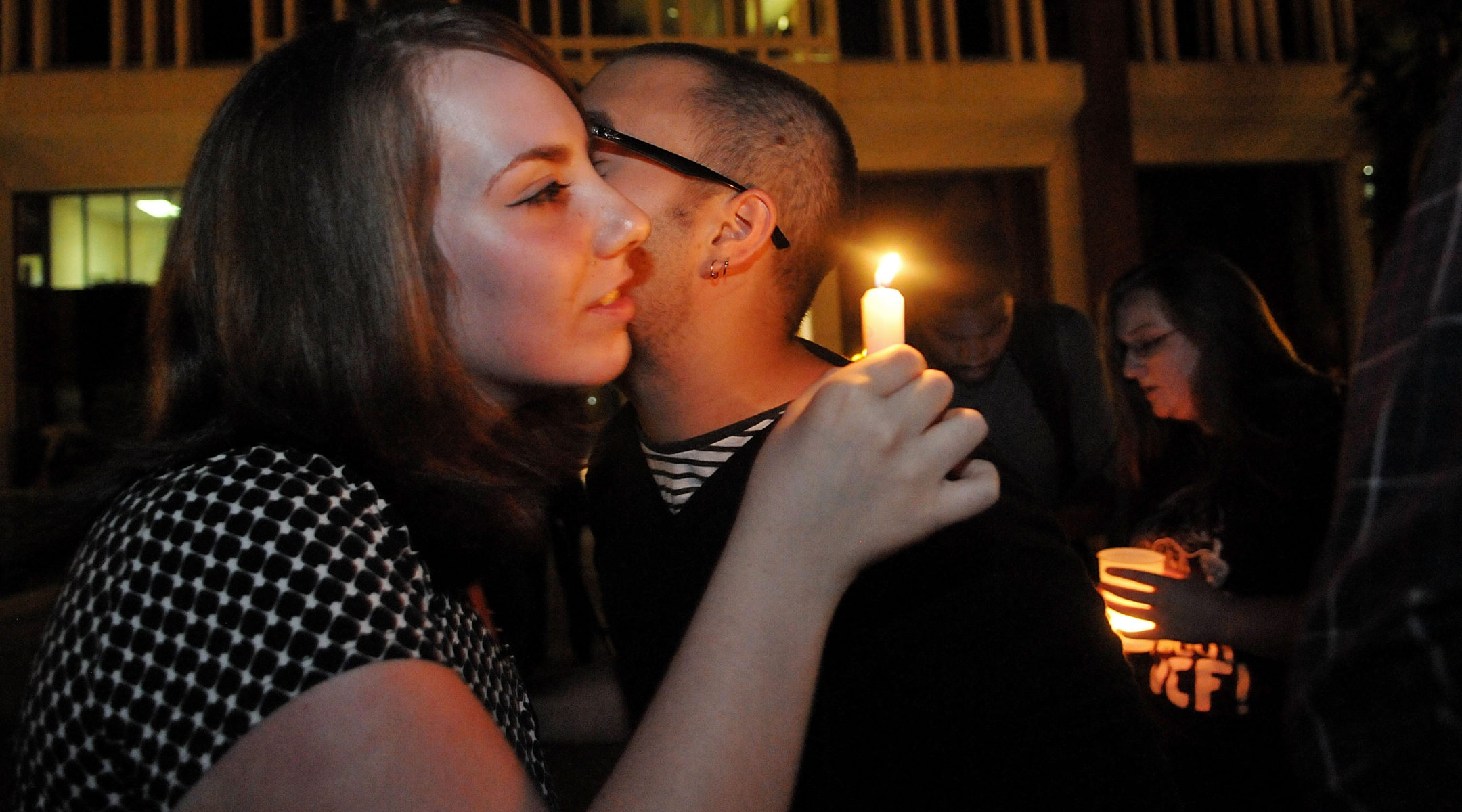 Those are some of the strategies used by Jewish reporters working in the Arab and Muslim Middle East to conceal their religious heritage.

The dangers facing Jewish journalists in the region became evident this week after the beheading of a dual American-Israeli citizen, Steven Sotloff, by the jihadist group Islamic State, or ISIS.

It’s not known whether ISIS was aware that Sotloff was Jewish. Colleagues believe his kidnapping by ISIS-affiliated terrorists in 2013 in Syria was one of opportunity and not a deliberate targeting. James Foley, another journalist kidnapped by ISIS and beheaded last month by the terror group, was Catholic.

However, Sotloff’s family in South Florida, his friends and colleagues — indeed much of the journalistic community — went to lengths to conceal his family’s deep involvement in the Jewish community and his Israeli citizenship in order not to draw his captors’ attention to a factor that may have exacerbated his ordeal. JTA did not report on his captivity for the same reason.

The captors of Daniel Pearl, a Wall Street Journal correspondent kidnapped and beheaded by terrorists in Pakistan in 2002, made a point of his Jewishness. In the video showing his execution, they included Pearl saying “My father is Jewish, my mother is Jewish. I am a Jew” among his final words.

“We send our deepest condolences to the family of Steven Sotloff,” Pearl’s parents, Judea and Ruth, said in a statement emailed to JTA. “We know too well the pain of such horrific loss. Once again the world has seen the horror of terrorism in action. We continue to find strength in the belief that united, civilization will triumph and humanity will prevail.”

As ethnic and sectarian origins loom large in every encounter, keeping Sotloff’s Jewish identity under wraps made sense, said Janine Zacharia, who has reported in the region for the Washington Post.

“For me, the first question whenever I met anyone in the Arab world was ‘where are you from,’ and they weren’t asking whether it was the United States or Canada — it was ‘are you a Muslim or a Jew?’ ” said Zacharia, who was based in Jerusalem for the Post from 2009 until 2011 and who now lectures at Stanford University.

“I would say, ‘I’m from New York or D.C.,’ and if they persisted, I would say ‘My grandfather is from Greece,’ which is true. I didn’t want to say what my religion was,” she said.

Another Jerusalem-based correspondent who asked not to be named because she is still reporting throughout the region said she drew on the experiences of extended family who are Christian to pretend she was as well.

“You hear it in conversation. ‘You’re not a Jew, are you?’ ” said this correspondent, who knew Sotloff. She said it was especially pronounced in Libya during the overthrow of Muammar Gadhafi there in 2011. “There was so much indoctrination against Jews, but they didn’t know Jews.”

Suspicion of Jews is not straightforward, correspondents said. Often it is wrapped into other issues — for instance, being based at  Jerusalem, which hundreds of foreign journalists are. Many governments in the region tend to ban entry to correspondents, regardless of religious heritage, who are based in Israel.

When they are allowed in, Jerusalem correspondents traveling to Arab countries go to lengths to cover up any Israel ties: ripping tags out of clothes, leaving Israeli cash with trusted friends in transit cities, shutting down social media accounts.

It’s not just an Israel address that can raise mistrust. First impressions in the region often take into account one’s background and presumed loyalties.

Aaron Schachter, who was based in Lebanon and Jerusalem for the BBC in the last decade, said that in Lebanon, asking one’s background was a natural opening conversational gambit. But when the answer was “Jewish,” he said, there was a patina of suspicion that he called “creepy.”

“In Lebanon it was slightly threatening because everyone pays attention to what you are — Sunni, Shia — and it’s not unusual for someone to call attention to it, but at a point it’s vaguely threatening” for Jews, said Schachter, now an assignment editor for The World, a Public Radio International program.

“I know what you are,” he recalled an interlocutor affiliated with Hezbollah, the Lebanon-based group that repeatedly waged war with Israel, as saying. The man drew the conclusion, correctly, that Schachter was Jewish from his first name.

“I know they’re going to try to figure out who you are, whether a Maronite Christian or Orthodox Christian,” Schachter said. “But when you have someone say ‘I know what you are,’ what is the purpose of that in the course of the conversation we’re having?”

One thing journalists quickly learn is that the Jewish “tells” in the West don’t mean much in the Middle East. Jewish names obvious in the West are not at all so in the region, and stereotypical “Jewish looks” among westerners are indistinguishable from the Mediterranean and Middle Eastern features that are common throughout the Middle East.

“My name might have been Miriam Leah Goldbergstein, and I wouldn’t have worried,” said Lisa Goldman, who reported for various outlets in Lebanon and then in Cairo during the Arab Spring in 2011.

A non-Jewish Baghdad correspondent for a major U.S. outlet recalled that in 2009, she and another American staffer were alarmed when they learned that a U.S.-based staffer for the outlet was on his way in for a reporting stint. From his looks and name, she said, they immediately surmised he was Jewish.

Stoking their alarm was the fact that local Iraqi hires were unabashed in their anti-Jewish hostility, at least in conversation with the non-Jewish American staffers, said this correspondent who asked not to be named to speak freely.

Afterward, she recalled, she casually asked the local hires for their impressions of the newcomer — would he fit in? Their reactions were universally positive; no one had guessed he was Jewish.

“It’s an issue,” said this correspondent, who knew Sotloff and after his kidnapping tracked on the Internet whether his Jewishness was exposed.

Jamie Tarabay, a senior staff writer for Al Jazeera who is not Jewish, said the anti-Jewish hostility alarmed her during her reporting in Baghdad for a number of major U.S. outlets.

“All I know is that people who might have been Jewish in Baghdad, you kept it quiet, you did not talk about it,” she said.

Goldman said that the educated professionals she encountered in Lebanon and Egypt were at pains to distinguish between Jews and Zionists.

“People’s minds are very muddled, they talk about the people of the book, the tolerance that the Prophet had for the Jews, but they are aware most Jews support Israel as an identity issue,” said Goldman, now the director of the Israel-Palestine initiative at the New America Foundation, a think tank.

Goldman recalled a casual conversation she had in her pidgin Arabic with a cab driver in Cairo in 2011, during the uprising. The mood was festive and it began well, she said.

“’Where are you from?’ ‘Canada.’ ‘Walla! Are you a Christian?’ ‘No I’m Jewish,’” Goldman recounted. “He must have changed color five times and went silent.”

She asked an Egyptian friend later about the encounter and was told that years of anti-Jewish government propaganda had left its mark.

“ ‘He was probably wondering where your horns were,’ ” her friend told her.