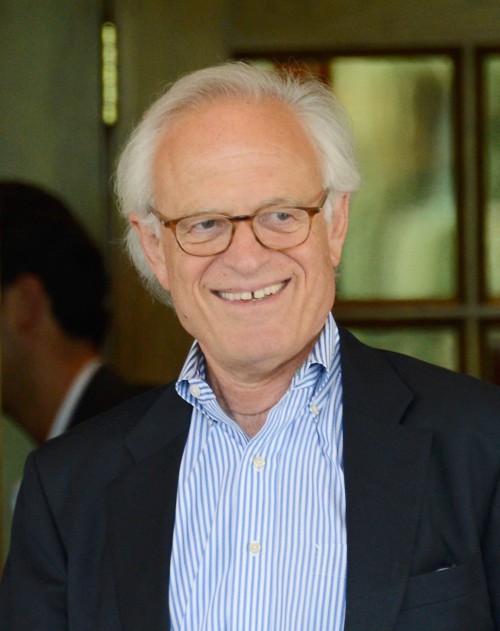 WASHINGTON (JTA) – What was supposed to have revived the Israeli-Palestinian peace talks — allowing negotiations to develop organically — instead helped kill them, Martin Indyk, until recently the top U.S. peace broker, told JTA in a candid and wide-ranging interview.

Martin Indyk said that refraining from imposing ideas on the Israelis and Palestinians inhibited both sides from embracing them. (Kevork Djansezian/Getty Images)

Speaking by phone Sept. 19 while in transit to his native Australia for the High Holidays, Indyk described the collapse of the talks in April and the opportunities that have emerged from the war that ensued. He also opened up about his own return to the think tank world, where he faces accusations that foreign donors — particularly Qatar, which funds Hamas and other extremist groups — exert undue pressure on domestic policy discussions.

The process that ultimately hurt the peace talks entailed teasing out advances from Israeli Prime Minister Benjamin Netanyahu, adding some flesh to them and then bringing them to Palestinian Authority President Mahmoud Abbas, also known as Abu Mazen, for consideration. But refraining from imposing ideas inhibited the sides — particularly the Palestinians — from embracing them, Indyk said, describing what he said was a “damned if we did, damned if we didn’t” dilemma for the Americans.

Indyk, who Secretary of State John Kerry tasked with restarting peace talks from July 2013 until June of this year, recalled an optimistic phone call he made to Jewish community leaders in January.

“We had the sense then that Netanyahu had moved,” he said, “and that had given us some optimism that we would be able to move forward.”

Among the ideas that Indyk hoped to advance was the introduction of complex security arrangements for the Jordan Valley that would mitigate against Israel’s perceived need to maintain a military presence there. Other ideas put forth: language that would address Netanyahu’s demand to have the Palestinians recognize Israel as a Jewish state and land swaps allowing up to 80 percent of West Bank Jewish settlers to stay in place.

But things “went south,” Indyk said, after the U.S. side met with Abbas in February.

“Abu Mazen, at the critical moment when we needed to respond after we had spent a lot of time negotiating with Prime Minister Netanyahu and moved him into the zone of a possible agreement, didn’t respond,” he said.

“We were sensitive to the charge that the Palestinians used to make in earlier efforts that the United States is Israel’s lawyer, it just cooks everything with Israel and seeks to impose it on the Palestinians,” Indyk said.

Indyk said that in a May speech to the Washington Institute for Near East Policy, he did not blame Netanyahu personally for the settlement expansion. He has said the settlements helped scuttle the talks.

“It was a kind of a situation in which the prime minister was very determined to try and reach a deal and he had ministers in his Cabinet who didn’t believe in it,” Indyk said. “There’s something structural about Israeli politics because of the nature of having to build coalitions — it’s very difficult for a prime minister to move forward.”

Another non-starter, Indyk said, was Israel’s insistence that it maintain a permanent military presence in the West Bank.

“I do not underestimate the Israeli security climate” in the wake of this summer’s Gaza war and the Islamist insurgency in Iraq and Syria, but Israeli troops staying in place is “a perpetuation of the occupation. It’s not possible to work that out in the area that’s supposed to be the Palestinian state.”

Indyk had praise for the pro-Israel community, citing the American Israel Public Affairs Committee as being particularly helpful. His team maintained outreach through a full-time State Department staffer, Laura Blumenfeld, and Robert Wexler, the former Democratic congressman who now helms the Center for Middle East Peace.

“We put a lot of effort in trying to get them to understand what we were trying to do,” he said, referring to the Jewish and pro-Israel leadership. “In general, they want peace, they want a two-state solution if it means a secure Israel. It was gratifying.”

“I don’t think that during those nine months we faced any backlash on the Hill,” he said, acknowledging surprise. “I spent a lot of time on the Hill and got very strong support from the appropriators, Republicans and Democrats.”

After Abbas refused to commit, Kerry and Indyk failed to get the sides to extend the talks beyond the April deadline. Abbas’ Fatah party later joined Hamas in backing a government of technocrats, leading Netanyahu to threaten to isolate the Palestinian Authority.

Then in June, there was the kidnapping and murder of three Israeli teenagers. The next month came the revenge murder of a Palestinian teenager plus the launch of Israel’s military operation against Hamas in the Gaza Strip that lasted into late August.

Indyk left his State Department post in late June and returned to the Brookings Institution as its vice president and director for foreign policy.

He said the war may have presented opportunities to boost Abbas and contain Hamas’ influence.

Indyk, before he launched his career as a diplomat during the Clinton administration, worked for AIPAC and founded the Washington Institute for Near East Policy, a think tank with strong ties to the Israeli and U.S. governments.

Given that background, he sounded more nonplussed than infuriated — although he was infuriated — by the argument published recently in Tablet that funding for Brookings by Qatar may have influenced his outlook during his most recent stint at the State Department.

“The conspiracies of me serving as the agent of Qatar are as credible as those having me acting as an agent for Israel when that was put forward by Walt and Mearsheimer,” Indyk said, referring to the 2007 book “The Israel Lobby,” by John Mearsheimer and Stephen Walt, that posited undue Israeli influence in Washington.

Indyk noted that until this year, Brookings’ Middle East branch was named for the Israeli-American entertainment mogul Haim Saban, who has close ties with Israeli government officials.

“Haim has been a bigger donor to Brookings than Qatar has,” he said, comparing the more than $20 million Saban has given Brookings to the $14.8 million from Qatar — most of it for a Brookings campus in Doha. “In both cases, they respected our independence.”