For Ramallah’s man in The Hague, ICC drive is reluctant duty 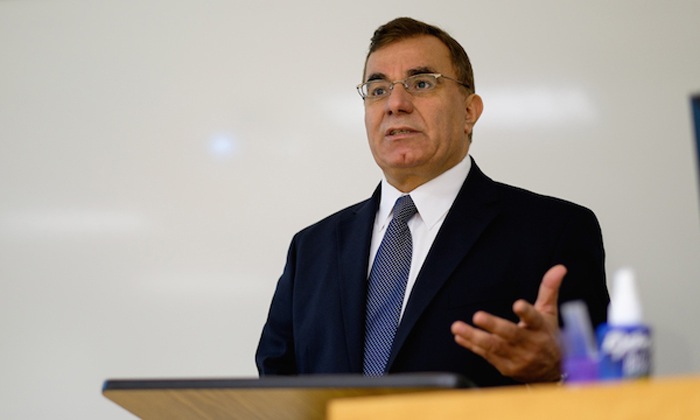 THE HAGUE, Netherlands (JTA) — Loading a newly released video of a beheading in Syria on his smartphone, Nabil Abuznaid, the Palestinians’ ambassador here, shakes his head in disbelief.

“Look at those animals,” he says, referring to the fighters from the ISIS jihadist group who carried out the decapitation. “Do you think Israelis are immune from this craziness? Me, I’m even more scared of this fundamentalism.”

To Abuznaid, who has represented the Palestinian Authority in the Netherlands for the past five years, such barbarity is a sign that the Israelis and Palestinians should resolve their differences peacefully and stand united against the shared threat of extremism.

But on Abuznaid’s desk, under a life-size portrait of the late PLO leader Yasser Arafat, are documents connected to a move that could undo 24 years of efforts to find common ground: The Palestinian Authority’s plan to expose Israel to war crimes charges at the International Criminal Court in The Hague.

Abuznaid says he is advancing the motion with little enthusiasm. But if P.A. Foreign Minister Riyad al-Maliki is to be believed, within the year the Palestinian Authority will accede to the Rome Statute, the treaty that established the ICC in 1998, which would give the U.N. tribunal jurisdiction to probe war crimes investigations against Israel.

Both the Palestinians and Israelis consider the move a game-changer, a step after which a negotiated two-state solution may be all but impossible.

“This is not the Palestinian preferred choice because going to the ICC is the final divorce: one-way move, no way back,” said Abuznaid, 60, a former lecturer in international relations from Hebron who spent a few months in an Israeli jail in the 1980s for his membership in the PLO. “I don’t think Palestinians and Israelis are ready for a final divorce.”

If the Palestinians move ahead with their plans, it is Abuznaid who will be the P.A.’s point person on the matter. Abuznaid says his family is from Haifa, where they lived before Israel’s establishment in 1948, when they left along with hundreds of thousands of Palestinians who fled or were driven out of Israeli-controlled areas during the War of Independence.

As a young man, Abuznaid believed in the Palestine Liberation Organization’s strand of radicalism. He was a self-described revolutionary who thought Israel had to be destroyed. But over time his politics have softened, and today even his Israeli detractors consider him a pragmatist.

“Let the person who is living in my family’s house in Haifa enjoy the beach there and I will enjoy my life in Hebron and we can be friends,” he says. “There is no choice but to divide the land.”

Equipped with good English and a political science degree from James Madison University in Virginia, Abuznaid climbed the PLO ranks to become a personal adviser to Arafat, serving under him during the Oslo negotiations. Abuznaid later returned to the United States to serve as deputy head of the Palestinian Authority’s mission in Washington, among other positions. His wife, Lubna, and their two children are living in the United States.

“Abroad I’m a diplomat who receives the red carpet,” Abuznaid says. “But when I return home, I need to wait in my car for a boy the age of my son who’s treating me like I’m barely human,” he says of the soldiers who check his papers when he crosses the Allenby Bridge between Jordan and the West Bank.

Unlike his position on checkpoints — a longstanding Palestinian gripe – Abuznaid’s reluctant attitude to the ICC move seems out of sync with Ramallah’s public defiance. Yet despite the rhetoric, it’s not clear how eagerly the Palestinians are to play the ICC card.

In July, the Palestinian Authority’s justice minister and the general prosecutor in Gaza sent an official request for an ICC investigation of alleged war crimes committed by Israel this summer during its campaign against Hamas in Gaza. The following month, during Maliki’s visit to The Hague, he told reporters that accession is “only a matter of time and will occur this year.”

But a letter from ICC prosecutor Fatou Bensouda leaked last month states that Maliki was asked to confirm the request contained in the July letter and declined to do so.

“A decision was taken to go ahead with the ICC move, yes,” Abuznaid said. “But it’s not final until the papers are submitted. So it’s still something that can be avoided. Because if we realize the ICC option, what then? How would we go forward with the peace process? The day we sign, things will be different between us and the Israelis.”

It’s impossible to know if Abuznaid’s qualms may merely be part of a strategy that keeps the ICC option as a bargaining chip in the Palestinians’ diplomatic chess match with Israel, or if he is expressing a genuine aversion to what could be a grand but ineffective gesture.

Haim Divon, Abuznaid’s counterpart at the Israeli Embassy in The Hague, believes it’s the latter.

“As a pragmatist, Mr. Abuznaid knows an ICC bid would lead nowhere and only poison the atmosphere,” Divon said.

Abuznaid and Divon know each other well from appearing together in so many forums that Divon once jokingly referred to the configuration as “The Haim and Nabil Show.” They have their disagreements, including over Abuznaid’s drawing of parallels between the Holocaust and the Palestinian exodus of 1948, but the relationship has remained cordial.

Asked about his relationship with Divon, Abuznaid says, “If it were only up to him and me, I think we would sign a peace agreement pretty soon.”