The reconstructed painted ceiling of the wooden synagogue of Gwozdziec, a key installation in the core exhibit of the POLIN Museum of the History of Polish Jews. (Ruth Ellen Gruber)
Advertisement 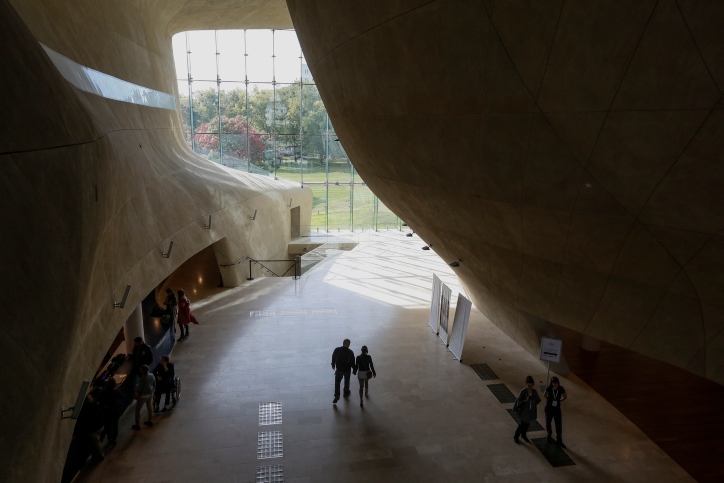 The core exhibit of the POLIN Museum of the History of Polish Jews was inaugurated in Warsaw, Oct. 28, 2014. (Miriam Alster/FLASH90)

WARSAW, Poland (JTA) — In a Europe wracked by fears of rising anti-Semitism, and in a country whose Jews were all but annihilated in the Holocaust, a dazzling new “museum of life” celebrates the Jewish past and looks forward to a vital future.

Polish President Bronislaw Komorowski and Israeli President Reuven Rivlin on Tuesday jointly inaugurated the long-awaited core exhibit of the POLIN Museum of the History of Polish Jews, a more than $100 million complex first conceived more than 20 years ago.

“It is not a museum of the Holocaust, it is a museum of life,” Rivlin, who was making his first trip abroad since his election this summer, declared at the opening ceremony. “It is the place that commemorates everything that is gone and will never return. And it reveals hope for a different future.”

Komorowski stressed the same hopes, declaring that the museum opening was a history-making event that bore witness to Poland’s development into a democratic state since the fall of communism.

“One of the central themes in our drive to freedom was to put right the account of history that had been corrupted, manipulated and distorted in so many ways during the non-democratic communist era,” Komorowski said.

Before the Holocaust, some 3.3 million Jews lived in Polish lands. Thousands of survivors fled anti-Semitism in the postwar period. The fall of communism sparked a remarkable revival in Jewish life and identity, but the Jewish population today is still tiny, estimated at 15,000-20,000 in a country of nearly 40 million people.

“We are here!” Auschwitz survivor Marian Turski, chairman of the Council of the Jewish Historical Institute, one of the institutional founders of the museum, said in an emotional speech at the opening ceremony. “That is the message: We are here!”

The reconstructed painted ceiling of the wooden synagogue of Gwozdziec, a key installation in the core exhibit of the POLIN Museum of the History of Polish Jews. (Ruth Ellen Gruber)

The museum is housed in a shimmering glass building erected on the site of the Warsaw Ghetto facing the dramatic monument erected atop the rubble left when the Nazis crushed the ghetto uprising in 1943. Described as a “theatre of history,” the core exhibit uses state-of-the-art technology and multimedia installations to narrate 1,000 years of Polish Jewish history.

The exhibition’s eight thematic and chronological galleries detail the complex ebb and flow of Jewish life in Poland from the early middle ages to the present, including periods of prosperity as well as persecution.

They recount grand events but also use letters, diaries, photos and other intimate material to provide personal viewpoints. This is particularly notable in the Holocaust gallery, which narrates the history through the words and deeds of the people who experienced it.

Other highlights include the reconstructed and elaborately painted ceiling and bimah of the now-destroyed wooden synagogue in Gwozdziec (in present-day Ukraine) and a painted animation of 24 hours in the life of the famous yeshiva in Volozhin (now Belarus).

But the core exhibit is only part of the story.

The museum’s impact “stretches way, way beyond the building,” said Piotr Kadlcik, president of the Union of Jewish Religious Communities in Poland. “And it’s not about a museum of the history of Polish Jews — it’s about Polish Jews. History means past, and it’s not about the past.”

Hundreds of thousands of people — Poles and Jews, locals and foreigners — have visited the museum in the 18 months since the building was opened to the public. Organizers expect a half-million or more each year now that the core exhibit has been opened.

The museum is part of a wider movement since the fall of communism “to reconnect with the past, including the Jewish past,” said Dariusz Stola, the museum’s director. “The museum is the most visible element in this movement. But without the broader movement it wouldn’t have happened.”

This broader movement includes a number of new Jewish studies programs at Polish universities, new or revamped museums, permanent exhibits and memorials on Jewish or Holocaust themes in a number of provincial towns and scores of grassroots initiatives ranging from Jewish cemetery cleanup actions to Jewish culture festivals. This year alone, some 40 Jewish culture festivals took place in Poland, mostly in places where no Jews live today.

The POLIN museum was built as a public-private institution, with the Polish government and the city of Warsaw providing $60 million for construction and more than 500 private and institutional donors, many of them Jewish, contributing $48 million for the core exhibition.

“Though Europe has seen a recent rise in anti-Semitism, in Poland we are seeing a revitalization of Jewish life and culture that is being experienced by – and truly driven by – both Poland’s Jewish and gentile communities,” the San Francisco-based philanthropist Tad Taube, head of Taube Philanthropies and the Koret Foundation, said in a statement.

The two organizations were the largest private donors to the museum with a total contribution of $16 million.

“The opening of the POLIN Museum of the History of Polish Jews is a game changer that will break down negative stereotypes about Poland,” Taube said.

The hope, his statement added, is that its lessons “will have ripple effects throughout Eastern Europe as Poland’s neighbors seek to develop their own major modern cultural institutions and broader, more inclusive narratives of their multicultural histories.”