From the Archive: Israel’s friend in Hanoi

To mark more than 20 years of diplomatic relations between the two countries, Vietnam will host its first Israeli film festival in November, the Israeli Embassy in Hanoi announced last week.

In 1966, JTA revealed the details of a conversation that had taken place 20 years prior between David Ben-Gurion and then-prime minister of North Vietnam, Ho Chi Minh. The two had lived in the same Parisian hotel and, according to Ben-Gurion, became “very friendly.”

After Ben-Gurion outlined the “Jewish problem” to Ho Chi Minh, the Vietnamese leader suggested the future Israeli prime minister proclaim a Jewish government in exile and establish its headquarters in North Vietnam. Despite their rapport, Ben-Gurion refused the offer.

“For obvious reasons” he said, the idea was “unacceptable.” 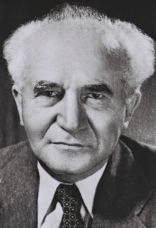 The circumstances surrounding the next attempted agreement were drastically different. In November 1972, when a cease-fire agreement between North and South Vietnam seemed imminent, Israel signed a mutual recognition with South Vietnam and agreed to an immediate exchange of ambassadors. Several months later, with cease-fire negotiations deteriorating, Israel decided to postpone opening its embassy and delayed the ambassador exchange indefinitely.

In 1975, when South Vietnamese forces were defeated in Saigon, Israel’s relationship with Vietnam essentially evaporated.

The fall of Saigon, which marked the victory of the North Vietnamese and the end of the Vietnam War, took place on April 30, 1975. Several days later, JTA reported:

“Israelis do not expect any sort of relations to develop with the new Communist regime in Saigon despite statements by its representatives that it was ready to establish relations with all countries. There is ‘not a hope in hell of ties with ‘Ho Chi Min City,’ political circles [in Israel] said today.”

Beyond ending formal Israel-Vietnam relations for the foreseeable future, Saigon’s fall also led to a mass exodus of Vietnamese refugees. In 1977, 66 refugees were rescued by an Israeli freighter in the South China Sea after five other ships had passed by their raft without offering help. In his first official act, newly elected Israeli Prime Minister Menachem Begin made the Vietnamese refugees citizens of Israel. JTA reported:

“The refugees, who included 16 children and several pregnant women, were given visas and work permits along with pocket money, toys for the children, and large quantities of fish, rice and vegetables which are Vietnamese staples.

The refugees were overjoyed to be safe in Israel, but despite the diplomatic efforts years before, one refugee admitted: ‘The truth is I don’t really know where we are. I’d never heard of Israel before the Yuvali [the Israeli freighter] saved us.’ ”