Jerusalem tensions, simmering since the summer, start to boil over 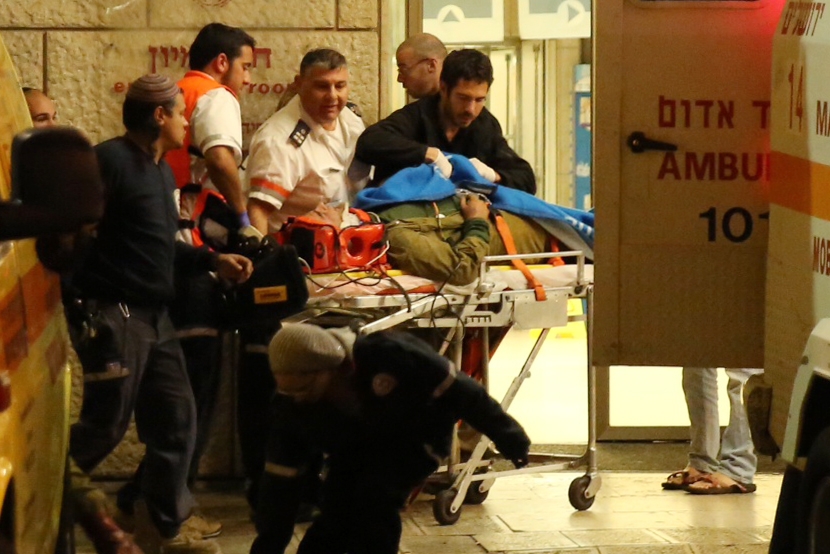 Israeli soldiers being evacuated at the Hadassah Ein Kerem hospital in Jerusalem, Nov. 5, 2014. Three Israeli soldiers were injured when a Palestinian driver rammed into the soldiers near the West Bank village of Al Aroub close to the Gush Etzion junction, in what initial suspicions indicate to be the second terror attack of this kind that day. (Hadas Parush/Flash90)
Advertisement

TEL AVIV (JTA) –  Tensions in Jerusalem have run high since last summer, but have recently crossed over into lethal violence.

In the past two weeks, there have been three attacks in which motorists have plowed into crowds of people — killing, among others, a 3-month-old baby and injuring dozens. Two of the attacks took place Wednesday, one at a Jerusalem light rail station and another at a military installation in the West Bank settlement bloc of Gush Etzion.

Meanwhile, violence has erupted in recent days at the Temple Mount, a sacred site for Jews and Muslims. Just last week, Israeli activist Rabbi Yehuda Glick, who advocates for Israel to lift the ban on Jewish prayer at the Temple Mount, was shot at close range and seriously wounded outside a Jerusalem conference center.

Adding to the uneasy atmosphere was Israel’s approval of more than 1,000 new homes to be constructed in eastern Jerusalem, angering the city’s Arab residents and drawing condemnation from the United States and the international community.

Experts say the attacks are the result of a slow burn of anger that began with the July murder of Mohammed Abu Khdeir, the 16-year-old burned alive by Jewish extremists, and that is rooted in Arab dissatisfaction with the expanding Israeli presence in the city and the perceived neglect of the city’s Arab residents.

Following Khdeir’s murder, which the perpetrators said was retaliation for the kidnapping and murder of three Jewish teens, unrest has gripped the eastern part of Jerusalem. Rioters took to the city’s streets in the days after the murder and sporadically throughout Israel’s war this summer with Hamas in Gaza. There were numerous rock-throwing incidents and repeated damage to the Jerusalem light rail station in the eastern neighborhood of Shuafat.

Israeli Police spokesman Micky Rosenfeld said that the perpetrator of Wednesday’s attack on pedestrians at a light rail station lived in Jerusalem and was connected to Hamas but acted on his own. Rosenfeld said police will heighten patrols and conduct a strategic assessment of security threats in the city.

“What we’re seeing now are lone-wolf attacks that are a result of ongoing incitement,” said Boaz Ganor, executive director of the International Institute for Counter-Terrorism at the Interdisciplinary Center Herzliya. “The incitement began with Hamas and spread to other forces. These forces understand these messages as a call to action.”

One of the conflict’s most volatile flashpoints is the Temple Mount, which Muslims refer to as the Noble Sanctuary. The day after the attack on Glick, Israel closed the Temple Mount to all worshipers. It was reopened the following day, and Israeli Prime Minister Benjamin Netanyahu promised to maintain the status quo, which prohibits Jewish prayer at the site.

In recent days, right-wing Knesset members have visited the site, which some see as a provocation.

Jordan on Wednesday recalled its ambassador from Israel due to clashes at the Temple Mount. And after Israel temporarily closed the site last week, Palestinian Authority President Mahmoud Abbas called for a “day of rage.”

“The Muslims fear and are mad that extremists want to take over the Temple Mount,” said Moshe Maoz, a Hebrew University Middle Eastern and Islamic studies professor. “The anger they have gets expressed not just on the Temple Mount but in all places, even in the Galilee and certainly in Jerusalem. They have the feeling that Israel is taking over.”

Israeli leaders have responded to the violence with harsh words. President Reuven Rivlin, who has focused on promoting coexistence, took a tougher line Wednesday, saying, “We will not cease to build across Jerusalem, to impose law and order, by virtue of our sovereignty.”

“We are in the midst of a prolonged campaign for Jerusalem,” Netanyahu said. “I have no doubt we will win it. We are utilizing all the forces needed to restore quiet and security to all parts of the city, but it may certainly be a prolonged fight and we must join together all the powers in our country for the fight.”

But terror attacks such as those on Wednesday may be difficult to prevent, Ganor said. Unlike organized attacks such as suicide bombings, they don’t necessarily involve a planning process that intelligence agencies can intercept.

And while the recent violence may spiral into future clashes, Maoz said a deeper cause of the unrest is Arab dissatisfaction with Israel’s presence in Jerusalem and its policies there, which they see as neglectful of the city’s Arab residents. According to a recent report by the Association for Civil Rights in Israel, Arab Jerusalemites receive fewer health, education and welfare services proportionally than do the city’s Jewish residents.

“This represents deep complaints that you can’t stop,” Maoz said. “The socioeconomic situation there is very bad. If it’s a united Israeli Jerusalem, why don’t they invest there? That’s also a reason for frustration.”