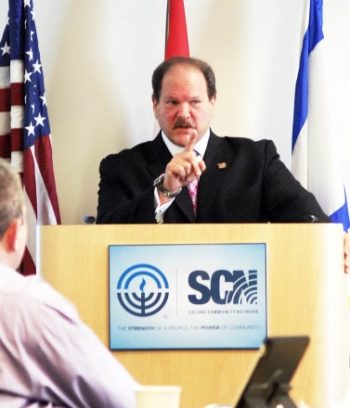 The task force was announced Tuesday in the Federal Register and SCN, an initiative of the Jewish Federations of North America and the Conference of Presidents of Major American Jewish Organizations, announced Goldenberg’s leadership role on Thursday.

“Foreign fighters, as seen so prevalently fighting alongside the Islamic State, present an unparalleled security challenge for the U.S and one that intelligence, counterterrorism officials, law enforcement and communities may be dealing with for years to come,” Goldenberg said in the SCN release.

The task force, the release said, will address strategies to keep Americans from joining foreign militant groups, assess border, immigration and transportation security policies, and recommend strategies to keep fighters returned from abroad from carrying out violence in their communities.

Goldenberg, who also serves on the DHS’ Faith-Based Advisory and Communications Committee, has a background in law enforcement, at one time heading the bias crimes office for the New Jersey attorney general.