At memorial for African Hebrew leader, signs of integration and respect 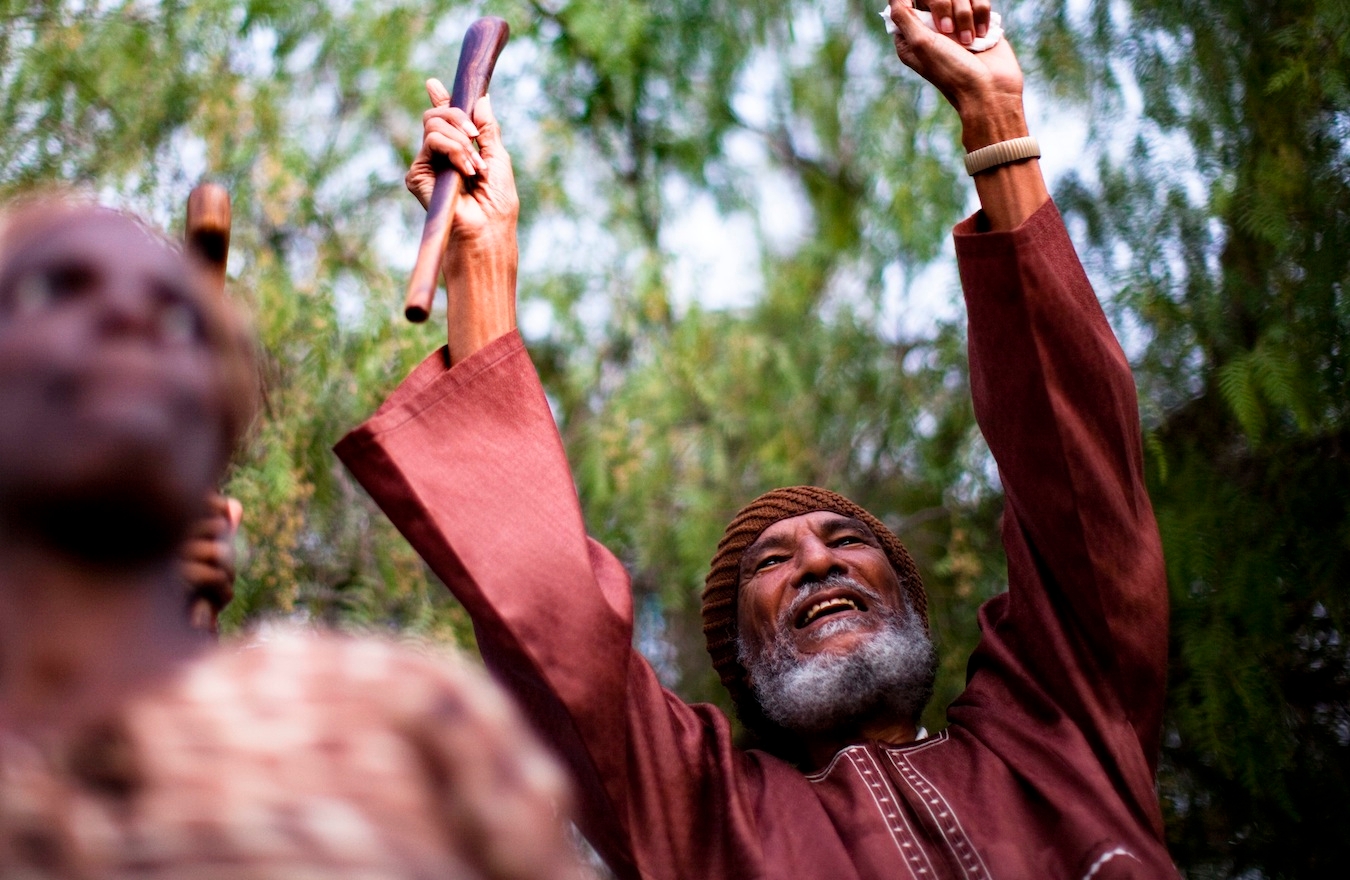 Ben Ammi Ben-Israel, the leader of the African Hebrew Israelites of Jerusalem who died Dec. 27, celebrating the festival of Shavuot in 2011. (Uriel Sinai/Getty Images)
Advertisement

DIMONA, Israel (JTA) — Yitzchok Elefant ascended the stage in his black hat and coat and turned to face an auditorium full of people in flowing white shirts and pants with matching scarves and caps.

Standing beneath a banner reading “A tribute to his majesty, our spiritual leader, the prince of peace, Ben Ammi,” Elefant, the haredi Orthodox chief rabbi of this small southern town, delivered a eulogy on Sunday for Ben Ammi Ben-Israel, the leader of the African Hebrew Israelites of Jerusalem.

Ben-Israel died Dec. 27 at age 75, nearly a half-century after leading a group of African-Americans to settle in Dimona.

“The Hebrew community is dear and loved to all of us in Dimona,” Elefant said. “The public in Dimona shares in your mourning of the distinguished leader Ben Ammi Ben-Israel.”

Such a tribute would have been unthinkable when Ben-Israel first arrived in Israel in 1969. Though the community does not identify as Jewish, Ben-Israel and his followers believe themselves to be descendants of the ancient Israelites, a claim that Israeli authorities met with suspicion.

For two decades, according to community spokesman Ahmadiel Ben Yehuda, a series of religious government ministers blocked the the group’s attempts to gain permanent residency permits.

But in recent years, the government’s attitude has shifted. Today, the African Hebrews enjoy permanent residency and a path to citizenship, and their children serve in the Israel Defense Forces. Ben-Israel gained Israeli citizenship in 2013.

At the service, Dimona Mayor Beni Bitton promised to advance plans to build a new neighborhood for the African Hebrews named for Ben-Israel. Knesset Speaker Yuli Edelstein, a senior member of the ruling Likud Party, also addressed the crowd.

“The Israelite community is a meaningful addition to our diversity,” Edelstein said. “Ben Ammi deserved that blessing, and made sure that people who followed him would be defined as Zionists, as a wonderful contribution to the mosaic of this population of Dimona in part and Israel in general.”

The approximately 3,000 African Hebrews in Israel consider Ben-Israel a “messianic leader.” Ben Yehuda referred to Ben-Israel’s death as a “transition” and the memorial service had an uplifting tone, with an upbeat dance performance, several songs and a video tribute. The crowd gave plenty of applause, along with shouts of “Hallelujah!” and “Ben Ammi lives!”

“Men like this that don’t come around so often, their death is not like a finality,” Ben Yehuda said. “They very much remain alive and pressed into service at a higher level. They only change their form.”

Born Ben Carter in Chicago in 1939, Ben-Israel was working as a steelworker when he claimed to have been visited by the archangel Gabriel, who instructed him to lead his followers to Israel. The group aimed to establish what Ben-Israel called the “Kingdom of God” in Israel, and the government repeatedly attempted to deport and detain his followers.

A detente between the group and the government in the late 1980s led to a compromise under which African Hebrew families gained citizenship in exchange for their children performing military service.

With the residency conflict over, the group focused on promoting health and sustainability in Israel and abroad. Its members eat a strictly vegan diet and wear clothes made of wool, silk, linen or cotton. They point to the growing number of Israeli vegans — nearly 5 percent of the country, according to a recent survey — as evidence that their values are spreading.

“Ben Ammi’s genius is reflected daily here and in other countries, where the Dimona model, the holistic life of the Hebrew Israelite community, is practiced,” said Zehorah Bat Israel, a community member. “In fact, in many parts of the world, Dimona has become a brand name for healthy living.”

The African Hebrews have also gained exposure among ordinary Israelis. In 2013, community member Ahtaliyah Pierce, then 17, performed on the Israeli version of “The Voice,” a reality show for emerging singers. About 300 African Hebrews have served in the IDF, several of whom performed in uniform at the service.

“This is our land,” Ben Yehuda said. “We want to demonstrate that to the Israeli public, but also to the Holy One of Israel, that we appreciate being here in this land.”