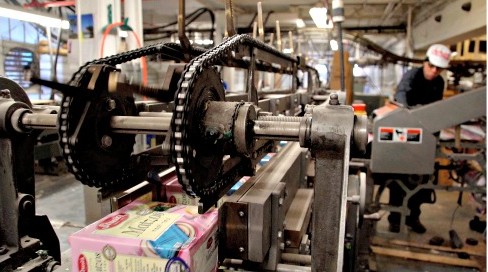 A machine in the Streit's matzah factory. (FamilyFoodie.com)
Advertisement

Aron Streit, Inc., a family-owned business, said it will leave the facility at 148-154 Rivington St. following the Passover baking season in April.

“The economics just finally caught up with us,” Alan Adler, the owner of the factory and the Streit’s matzah store, told JTA. “It was very sad, a very hard decision to make.”

Adler is the great-grandson of Aron Streit, who started a bakery at a different Lower East Side location before opening the Rivingston Street factory nearby in 1925. Streit’s now produces approximately 40 percent of the matzah consumed in the United States, according to The Associated Press.

The company will move its offices to its other facility in New Jersey that bakes macaroons and other products, Adler said. It hopes to fetch $25 million for the six-story building, AP reported.

“Right now everything is on the table, we’re looking at all our options,” Adler told JTA.

Adler told DNAinfo that the company cannot find anyone to repair its equipment, which was built in the 1930s, ’40s and ’50s.