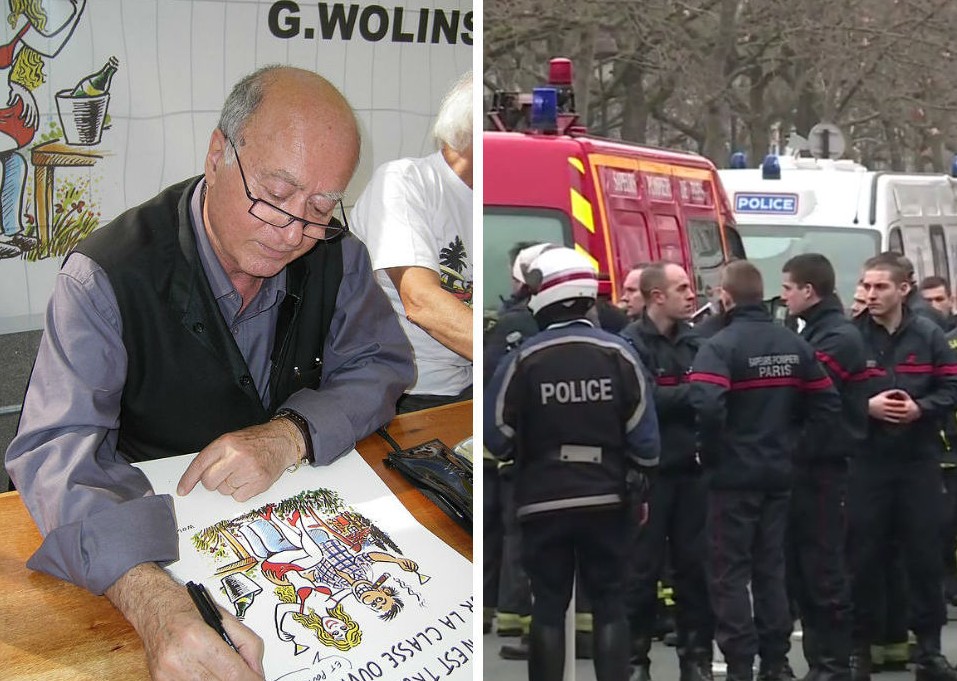 (JTA) — An attack on the Paris headquarters of a French satirical magazine has left at least 12 people dead, including the Jewish caricaturist Georges Wolinski.

Two of the reported fatalities in Wednesday’s attack were police officers, according to the French daily newspaper Le Monde. Later reports said that one of the officers was Muslim. Ten others were wounded, five of them seriously.

Details of the attack on the Charlie Hebdo offices are still sketchy, but witnesses said the three assailants knew exactly whom to target at the magazine, which has published a series of satirical cartoons of the Muslim Prophet Mohammed.

The gunmen, who wore masks, cried out “Allah is the greatest” in Arabic and announced that the attack was to “avenge the prophet,” Le Monde reported. They fled the scene; a massive manhunt was underway to find them.

They were later identified as two brothers — French nationals of Algerian descent — and an 18-year-old whose nationality was unclear and was said to be homeless.

Stephane Charbonnier, the magazine’s editor in chief and one of those killed, had been under police protection for years because of death threats resulting from his caricatures of Mohammed, including one showing him being decapitated by Muslim fanatics for being an infidel.

Wolinski, 80, a Tunisia native who moved to France as a teenager, also was a cartoonist at the magazine and was known for his cynical and at times vulgar style. After entering journalism in the 1960s, he went on to work at leading French publications such as L’Humanite, Le Nouvel Observateur and Paris Match.

One of Wolinski’s cartoons, published in a 2002 compilation of his works, shows a Muslim girl walking with her mother down a war-ravaged street in the Middle East. The daughter asks what it means to be a free woman. The mother replies by presenting her daughter with a copy of a book titled “Hello Sadness.”

“It’s clear that this was a planned attack against Wolinski and the other cartoon artists,” said Richard Kenigsman, a well-known Jewish caricaturist and painter from Brussels. He cited an attack and multiple threats against Charlie Hebdo since 2006 for publishing caricatures deemed offensive to Islam.

Corinne Rey, a designer at the magazine, was forced under death threats to let two gunmen into the offices after she returned from bringing her daughter to kindergarten. The assailants made her punch in the security code and proceeded to shoot four caricaturists — Wolinski, Charbonnier, Jean Cabut and Bernard Verlhac — along with eight others in a gunfire spree that lasted five minutes.

According to L’Humanite, the assailants also killed two of Charbonnier’s police-assigned bodyguards along with two other officers, one of whom was executed on the street outside the magazine’s offices while begging for his life.

The killers were native French speakers who said they were affiliated with al-Qaeda, Rey said.

Footage from the scene posted on the website JSSnews showed the heavily armed assailants exiting a black car and shooting a rifle at a police officer near the building. One of the assailants then approached the officer and shot him in the head.

Police had guarded Charlie Hebdo regularly since 2011, when the offices were firebombed. The fire consumed the paper’s archive and caused massive damage, according to Michel Kischka, a Belgian cartoonist who  knew three of the four cartoonists killed.

“Perhaps they failed to understand how well trained and adept at killing their enemies are,” Kischka said. “But after the 2011 fire, I know that they understood their determination to kill.”

To several observers, the attack on Charlie Hebdo — the bloodiest in France since 1835, according to Le Monde — was part of a wider fight against free expression.

Kenigsman said the assault was “an open act of war and an import of the conflict in the Middle East to France which focuses on satire because it’s the one thing that fanaticism cannot contain.”

Moshe Kantor, president of the European Jewish Congress, said the shooting was an attack on “the European way of life which has already seen Jewish children gunned down at school and people murdered in cold blood while visiting a museum in Brussels.”

French President Francois Hollande, speaking live near the scene of the shooting, called it a terrorist attack. Hollande, who noted that the magazine was threatened several times in the past, added that “we need to show we are a united country.”

French authorities “will punish the attackers,” he said. “We will look for the people responsible.”

Sammy Ghozlan, president of the National Bureau for Vigilance Against Anti-Semitism, said in a statement, “France must wake up to the danger of Islamism and the terror it brings all over the world: In Paris, Toulouse, Sarcelles, Brussels, Jerusalem and Tel Aviv, jihadists are acting on the same radical Islamist ideology that is used to manipulate them.”