Retro-style video game asks, can you be as pushy as Bibi? 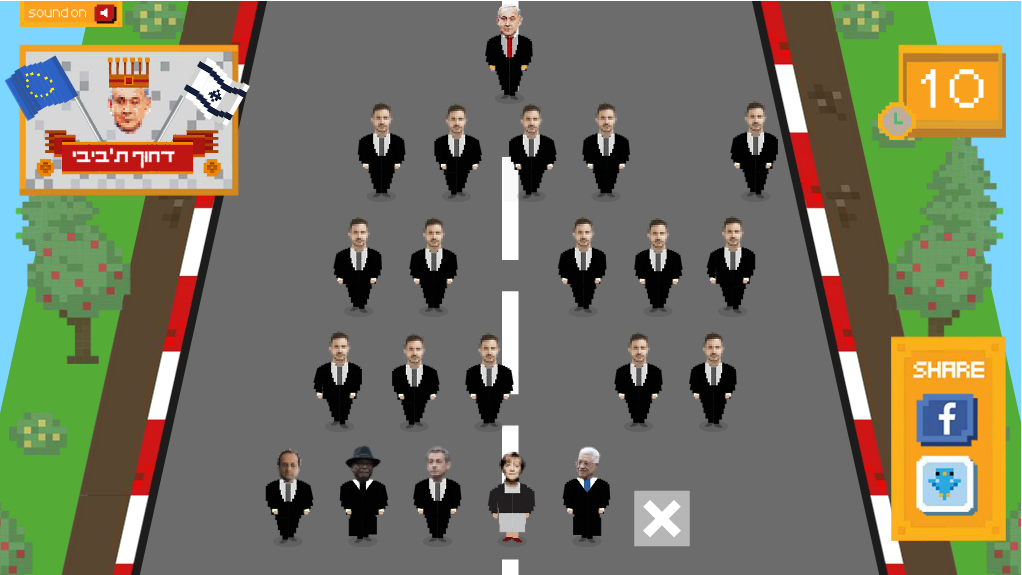 Israeli Prime Minister Benjamin Netanyahu has a knack for embroiling himself in political sideshows during foreign memorial services.

He entered Israel’s latest tempest in a teapot earlier this week, attending the march for victims of France’s terror attacks even though French President Francois Hollande asked him not to. Israeli media outlets are now reporting that Netanyahu pushed his way past other world leaders so he could get to the front of the crowd.

Among his previous funeral-related controversies: When British Prime Minister Margaret Thatcher died in 2013, Netanyahu came under fire domestically for installing a $127,000 bed on the plane for his five-hour flight to the state funeral — right when he was trying to pass an austerity budget.

Eight months later, when South African President Nelson Mandela died, Netanyahu made the news by planning to attend the memorial service and then pulling out, saying it would cost too much.

Like the other short-lived scandals, the Paris memorial controversy will probably blow over pretty soon. But in the meantime it’s led to something of an Internet gem.

The youth division of the rival Labor party has given us Push Bibi, an 8-bit video game where you have 30 seconds to guide Netanyahu past other heads of state to the front of the memorial procession.

Think of it as Frogger, Israeli diplomacy edition.