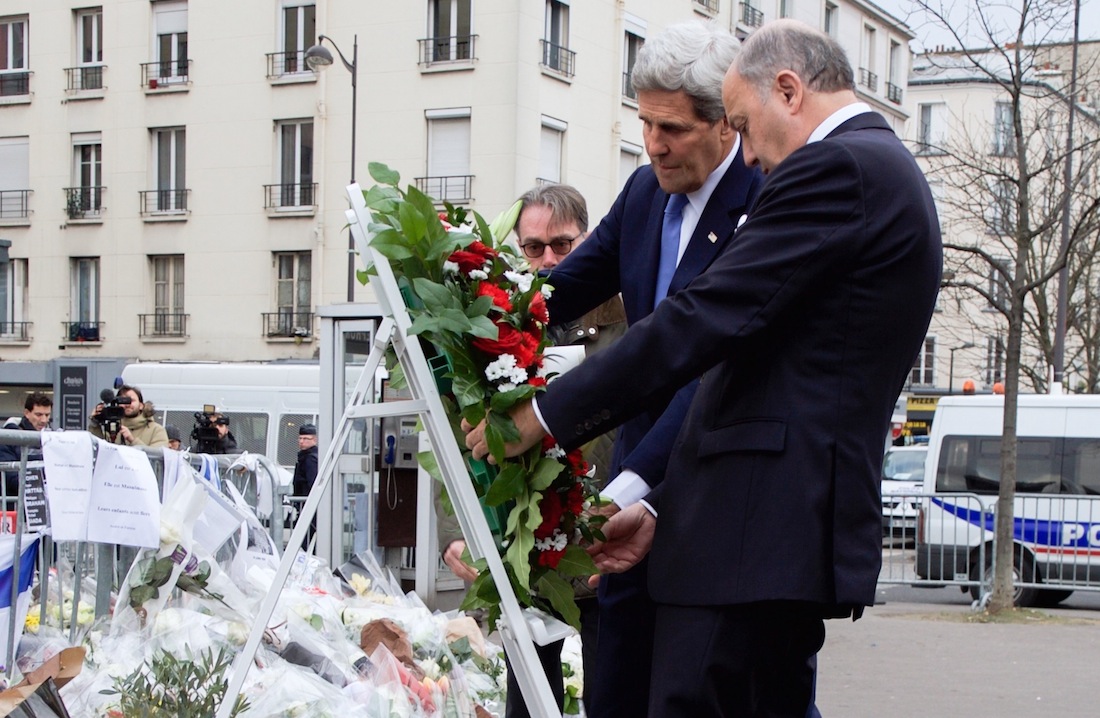 (JTA) — U.S. Secretary of State John Kerry laid a wreath at a kosher supermarket near Paris where four people were killed on Jan. 9.

Kerry, in France to express solidarity with the republic following the murder of 17 people in terrorist attacks in the Paris area last week, also reportedly “apologized” to his French counterpart, Foreign Minister Laurent Fabius, for not attending a march protesting the attacks.

In addition to meetings with French leaders, Kerry laid a wreath of red roses, carnations and white lilies at the Hyper Cacher Jewish supermarket. He also shared a brief word with Joel Mergui, the head of France’s Rabbinical Council.

Kerry’s visit followed intense criticism of the United States for failing to send a high-level representative to Sunday’s march, which drew more than 1 million people and dozens of world leaders into the streets, including Israeli Prime Minister Benjamin Netanyahu. On Monday, the White House acknowledged it had erred in sending only the U.S. ambassador.

“I know you know that we share the pain and the horror of everything that you went through,” Kerry said in a meeting with French President Francois Hollande on Friday. “Our hearts are with you.”

In an unusual move, Hollande trotted down the steps of the Elysee Palace to greet Kerry, who hugged the French president in front of photographers.

Kerry told Fabius that he was unable to come earlier because he was traveling in India and Bulgaria.

Hollande said the French people “were victims of an exceptional terrorist attack,” likening last week’s events to the Sept. 11, 2001, attacks on the United States, which resulted in the deaths of nearly 3,000 people.

“We must therefore together find the necessary response. And that is the [reason] for [our] meeting today, beyond friendship,” said Hollande.