A scene from one of the Selma-to-Montgomery, Ala., marches in 1965. (Wikimedia Commons)
Advertisement

This year, many of the conversations surrounding Martin Luther King, Jr. Day have involved the new movie “Selma,” about the historic marches from Selma to Montgomery in Alabama in 1965.

The film, nominated for the Academy Award for Best Picture on Thursday, has provoked discussion in some Jewish circles, with some having criticized “Selma” for leaving out  mention of Jewish contributions to the civil rights movement and others calling it politically astute and concurring with its focus on African Americans.

Viewers may wish to supplement the film with JTA’s coverage at the time, which, not surprisingly, zoomed in on the Jewish role.

After the “Bloody Sunday” march on March 7, in which many of the 600 protestors were beaten and hit with tear gas, Jews helped ramp up the pressure on President Lyndon Johnson to respond. On March 9, JTA reported that the National Jewish Community Relations Advisory Council (what is now the Jewish Council for Public Affairs) and seven of its affiliate organizations — including the National Council of Jewish Women and the Union of Orthodox Congregations of America — sent Johnson a telegram demanding that he take immediate action on voting rights legislation for African Americans, who JTA, in the style of the time, referred to as “Negroes.” Other Jewish organizations, such as the Association of Reform Rabbis of New York City, joined in over the next couple of days with telegrams of their own. 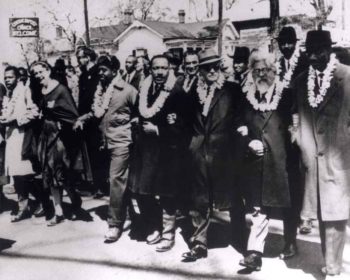 By the last of the three Selma marches, which took place on Sunday March 21 and into the 22nd and 23rd, it became clear that numerous rabbis and other Jews were not just supporting, but actually participating in, the marches  — inspiring some African American marchers to don yarmulkes in appreciation. JTA reported on March 22:

The Alabama Negroes called the yarmulkes “freedom caps.” The demand for yarmulkes was so great that an order has been wired for delivery of 1,000 when the marchers arrive in Montgomery later this week for a great demonstration at the state capitol…

While not assuming the Jewish faith, many Negroes adopted the yarmulke as a symbol of their movement.

Rabbi Abraham Joshua Heschel, who famously walked with Martin Luther King, Jr. at the front of the march to Montgomery, was not the only rabbi on the march. JTA reported that several rabbis were arrested for their participation:

Rabbis jailed by Selma police during the weekend for participating in demonstrations conducted Friday evening services in the Selma Jail, it was learned. Five rabbis recited Hebrew prayers behind prison bars. They have since been released on bond. An estimated 10 to 12 rabbis took part in the march which began yesterday.

Twenty years later, blacks and whites commemorated the events of “Bloody Sunday” by reenacting the momentous protest in Selma (peacefully this time, of course). JTA reported that Rabbi Alvin Sugarman of Atlanta, who had traveled to Alabama that morning on a bus packed to the limit with black and Jewish members of Atlanta’s Black Jewish Coalition, addressed the rally in front of the Brown Chapel church with moving words that symbolized how civil rights intersected with his Jewish life:

[Rabbi Sugarman] related an incident that happened only blocks from the Brown Chapel. “One morning I came in and a buyer phoned in and said he was late. He came in with mud all over his boots and said, ‘I’m sorry son, I was late; I was out in the field beatin’ up a bunch of niggers. ‘And he said that,” Rabbi Sugarman added, “as matter of factly as if he’d had a flat tire. I never walked in that man’s store again, and two years later I left the business world and entered rabbinic school.”