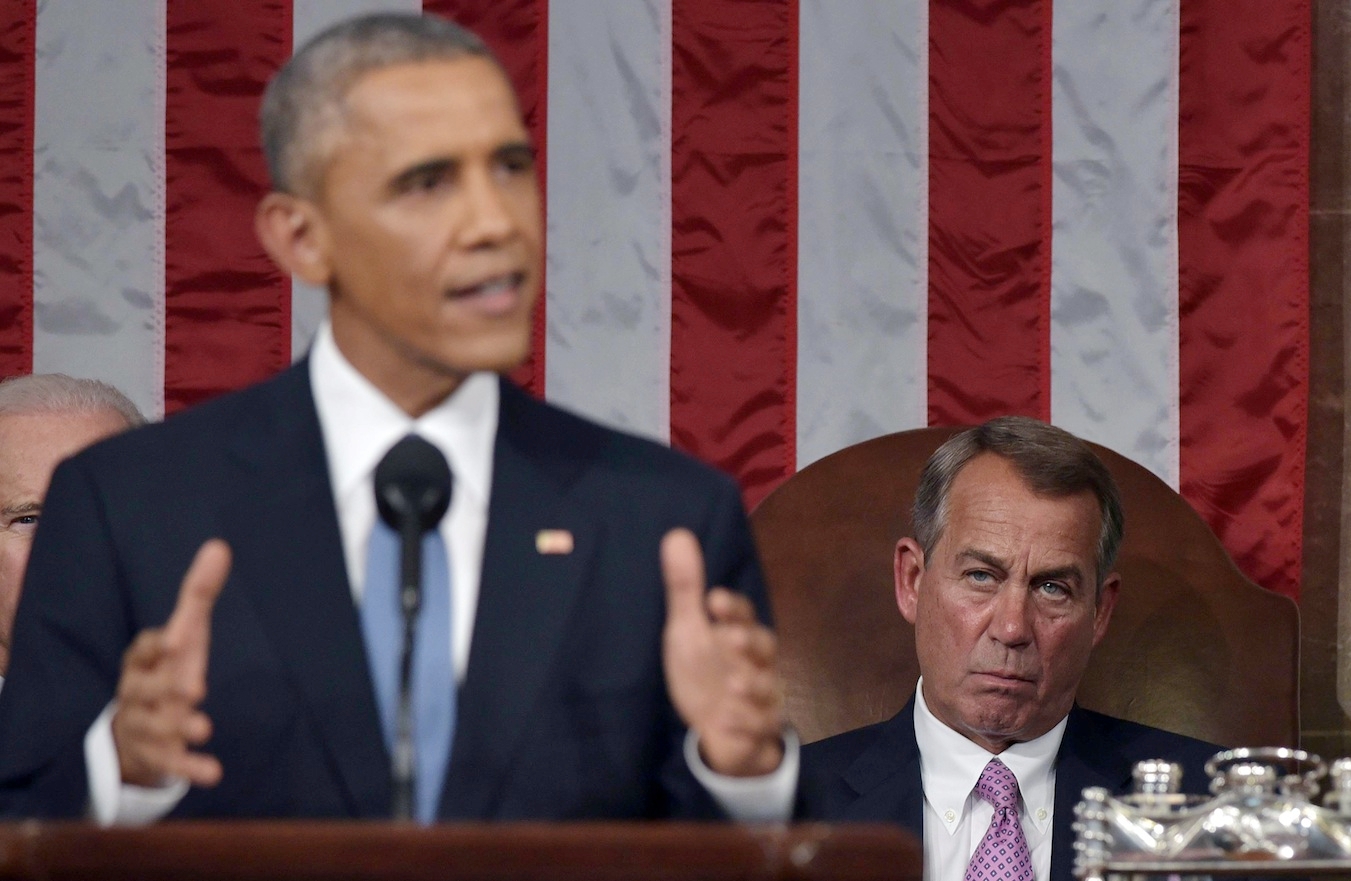 President Obama delivering his State of the Union address on Jan. 20, during which he promised to veto new Iran sanctions legislation. (Mandel Ngan-Pool/Getty Images)
Advertisement

WASHINGTON (Washington Jewish Week) — For the second year running, a bid to pass a bill intensifying sanctions against Iran appears to be foundering on threat of a presidential veto.

In his State of the Union address Tuesday, President Obama vowed to veto further sanctions legislation, saying it would “all but guarantee” his efforts to achieved a deal on Iran’s nuclear program would collapse.

The turbulence this week surrounding the sanctions legislation, authored by Sens. Mark Kirk (R-Ill.) and Robert Menendez (D-N.J.) with the strong backing of the American Israel Public Affairs Committee, has left the bill in limbo. Netanyahu’s scheduled March 3 address to Congress coincides with AIPAC’s annual policy conference, which he will also address.

Rep. Nancy Pelosi (D-Calif.), the House minority leader whose position on the bill would be critical to whipping the two-thirds majority to override a veto in the House, said the timing of Netanyahu’s speech was inappropriate, both because of the proximity of the March 17 Israeli elections and because Boehner has cast it as a rebuttal to Obama’s veto threat.

“We cannot have [Iran talks] fail when Congress wants to flex its muscle unnecessarily,” she told reporters Thursday, echoing Obama’s argument that new sanctions could scuttle talks with Iran on keeping it from obtaining nuclear weapons. “If that is the purpose of Prime Minister Netanyahu’s visit two weeks before his own election right in the midst of negotiations, I just don’t think it’s appropriate and helpful.”

Irking Pelosi especially was that Boehner issued the invitation “on behalf of the bipartisan leadership of the U.S. House of Representatives and the U.S. Senate” before consulting with her or Sen. Harry Reid (D-Nev.), the Senate minority leader.

“It is out of the ordinary that the speaker would decide that he would be inviting people to a joint session without any bipartisan consultation,” she said.

Boehner’s office did not respond to a query about consulting with Democrats over the invitation.

Senate Democrats who would be key to building a veto-proof majority of 67 votes in the chamber were sounding notes of reluctance.

Sen. Ben Cardin (D-Md.), who backed a similar Kirk-Menendez bill a year ago, seemed to backtrack in an interview Thursday.

“I’ve always supported additional sanctions, [but] it’s a matter of timing,” he said. “The administration has pretty strong views about bringing it up for a vote at this particular moment.”

Sen. Sherrod Brown (D-Ohio), the top Democrat on the Senate’s Banking Committee, which must approve the sanctions before they advance to the Senate floor, said he was not ready to endorse them just yet.

“I don’t know how I’m going to vote yet, but I think that we need to slow it down a little bit,” he said. “I talked to a number of our allies. I want to make sure we do this in a way that Iran does not walk away from the negotiations.”

Reid, speaking for the first time to the press after recovering from a serious exercise injury, was non-committal. “He’s going to come give a speech to a joint session of Congress, and we’re going to listen what he has to say,” he said.

For Menendez, a longtime champion of Iran’s isolation, it was deja vu all over again, and he was furious. A year ago his hallmark legislation foundered under almost identical circumstances: Solid support for the legislation dissipated among Democrats in both chambers after Obama issued a veto threat in his State of the Union.

This time around, though, the calculus was supposed to be different. Reid, as majority leader, used parliamentary maneuvers to scuttle the bill in 2014, but Republicans are in the majority now.

At a hearing Wednesday of the Foreign Relations Committee, on which he is the lead Democrat, Menendez accused Obama administration officials of bad faith.

“I have to be honest with you, the more I hear from the administration and its quotes, the more it sounds like talking points that come straight out of Tehran,” Menendez said. “And it heeds to the Iranian narrative of victimhood, when they are the ones with original sin: an illicit nuclear weapons program over the course of twenty years that they are unwilling to come clean on.”

Backers of the bill had at first seemed confident of its swift passage, shepherded by the new majority leader, Sen. Mitch McConnell (R-Ky.). The Banking Committee was due to consider the bill on Thursday, and AIPAC sent Senate offices a bill summary on Jan. 12 — unusual for a bill that had yet to be formally launched.

“The agreement clearly complies with the commitment President Obama made that the United States would impose no new sanctions during the course of negotiations with Iran,” AIPAC said.

The Banking Committee subsequently postponed its consideration of the bill until Jan. 29, and a number of alternatives are now under consideration that stop short of introducing new sanctions, including a proposal by Sen. Bob Corker (R-Tenn.), the chairman of the Foreign Relations Committee, that would subject any deal with Iran to an up or down congressional vote.

Leading Democrats said they saw sanctions as off the table for now.

“I do not support raising sanctions now,” said Sen. Dianne Feinstein (D-Calif.). “If the process fails, that’s another subject, but there’s no question that if we did it now, in my mind, it would bring on failure right away.”

“I think this Congress has a pretty miserable record of fairly judging international agreements presented to Congress by this president,” he said. “I think that we should be in the business of approving treaties, [but] I’m not sure if we need to be adding to our workload when we have an agreement that is not technically a treaty under the Constitution.”

Cardin suggested that Menendez would align with his caucus.

“I think Sen. Menendez has a pretty good understanding of the pros and cons here, so we’re all trying to keep the unity and, to me, the more we can work together with the president, the better off we are,” he said.