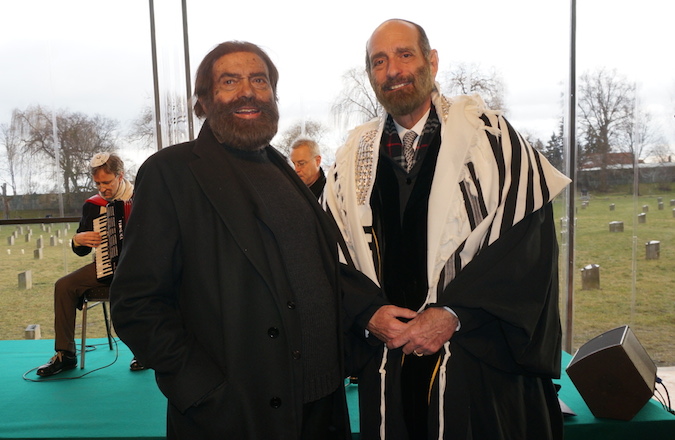 Holocaust survivor Marek Halter, left, and performers at a ceremony commemorating the 70th anniversary of the liberation of Auschwitz, which was held at the Terezin Memorial near Prague on Jan. 27, 2015. (Cnaan Liphshiz/JTA)
Advertisement

PRAGUE (JTA) — When they announced the ceremony marking the 70th anniversary of the liberation of Auschwitz, Polish officials insisted that at this year’s event, “the eyes of the world will be focused” on about 300 Holocaust survivors whose presence Tuesday at the former Nazi death camp near Krakow may be the last gathering of its sort.

The generation of Holocaust survivors, after all, is dying out.

Yet critics are charging that politics and tensions between Russia and its neighbors are nonetheless eclipsing the focus on the survivors and even muddling the historical record. Many believe that behind the main event, at Auschwitz, was an organized effort to discourage Russian President Vladimir Putin from attending — a reprisal of sorts for Russia’s annexation last year of Ukrainian territory.

Putin in his earlier stint as president attended the 60th anniversary ceremony in 2005. This time, a tentative invitation was extended to the Russian Embassy but not to Putin directly.

An attempt to keep out Putin was “a serious failure in commemoration because it was Russian troops who liberated the camp,” said Efraim Zuroff, the Israel director for the Simon Wiesenthal Center, the human rights organization. “This attempt to erase the Russian people’s contribution to defeating Nazism is casting a shadow on this commemoration and creating a vacuum in which untruths flourish.”

One such distortion: On Jan. 21, Polish Foreign Minister Grzegorz Schetyna told a local radio station that Ukrainians, not Russians, liberated Auschwitz, citing the fact that the Red Army unit that reached Auschwitz was called the First Ukrainian Front. And on Jan. 8, Ukrainian Prime Minister Arseniy Yatsenyuk stated that the Soviets “invaded  Ukraine and Germany,” when, in fact, it was the Germans who invaded the Soviet Union. His spokesman later explained that Yatsenyuk had in mind the carving-up of Poland in 1939 by Germany and the Soviet Union.

These historical inversions “show the level of hatred that exists for Russia for the moment,” said Peter Feldmajer, a vice president of the Hungarian Jewish umbrella group Mazsihisz.

In addition to the event in Auschwitz, the camp’s liberation was scheduled to be commemorated in Prague on Jan. 26 and at the United Nations General Assembly on Jan. 28.

But Putin’s presence would have been an especially sensitive matter in Poland, where anger over Russian aggression in Ukraine is mixed with bitter memories of Russian domination during and predating the Soviet era and fears of its return.

Polish officials denied that Putin was deliberately disinvited or discouraged from attending, noting that no other head of state had been officially invited, owing to the policy of focusing on survivors.

Many, however, doubted this argument, as the list of attending dignitaries at the Auschwitz event grew. Among others it included French President Francois Hollande and his German and Ukrainian counterparts, Joachim Guack and Petro Poroshenko, as well as the Dutch and Belgian premiers, Mark Rutte and Charles Michel, respectively.

Putin, however, had been invited to attend an event near Prague co-organized by the European Jewish Congress that brought hundreds of Jewish community leaders and dignitaries to commemorations of the Auschwitz liberation and to the nearby Terezin Memorial for the Theresiendstadt concentration camp.

EJC’s Russian-born president, the industrialist Moshe Kantor, set up the event near Prague with the Czech government to provide a commemoration ceremony where Putin would feel welcome, according to Peter Brod, a board member of the Jewish Community of Prague’s foundation.

“The feeling was that the Russian contribution to the liberation should be honored and commemorated in some way, and this led to the event,” said Brod, a former BBC journalist.

But Arie Zuckerman, a senior EJC official, said the event near Prague — which featured debates about anti-Semitism today and legislation to curb it — were never meant to serve as an alternative to the Auschwitz event, “which, unlike our event, is only about commemoration.”

Marek Halter, a well-known French Jewish author who survived the Holocaust in his native Warsaw before escaping to Russia, said he and his generation “have a responsibility to protect [the] historical record for as long as we can.” The record, he said, “is in danger of being lost in the politics of the new cold war we are entering between the United States and Russia.”

Putin’s attendance at Auschwitz, he added during an interview with JTA, “should have been facilitated to defend against this sort of obfuscation.”

Serge Klarsfeld, a Romania-born Jewish Nazi hunter who survived the Holocaust in hiding in France and whose father died at Auschwitz, said he “could understand the Polish state of mind regarding Putin,” but that he should have been invited.

“It’s not, as some Poles claim, that the Russians liberated Auschwitz because it was en route to Berlin,” he said. “They came to free Auschwitz, and the survivors will never forget the Red Army’s arrival there.”

Still, Halter said he could think of no place more appropriate than Prague and Terezin to commemorate the Holocaust.

“Prague was the only old Jewish city that the Nazis left intact because they wanted to turn it into a Jewish Jurassic Park, a museum to an extinct people,” he told JTA. “Convening hundreds of Jewish community leaders and dignitaries is a powerful response.”

But how the message is carried is changing as the last generation of Holocaust survivors passes on, Frans Timmermans, a vice president of the European Commission, told JTA at the Prague’s Municipal House, where Czech President Milos Zeman welcomed leaders of European Jewry and politicians with a brief address.

“We are at a critical point in European history because living memory is becoming history,” Timmermans said. “Soon there will be no more people with numbers on their arms to tell the story, and the tendency to beautify a terrible record is tempting.”

In Auschwitz, one of the survivors who is still telling his story is Ernst Verduin, 87, who lived in hiding in the Netherlands before he was deported to the death camp with his family. Verduin arrived at Auschwitz suffering from a severe lung infection and was sent immediately to the gas chambers.

“As we said goodbye, my sister wished me a quick death,” recalled Verduin, who survived because he left the gas chamber group and snuck to the group of men sent to work.