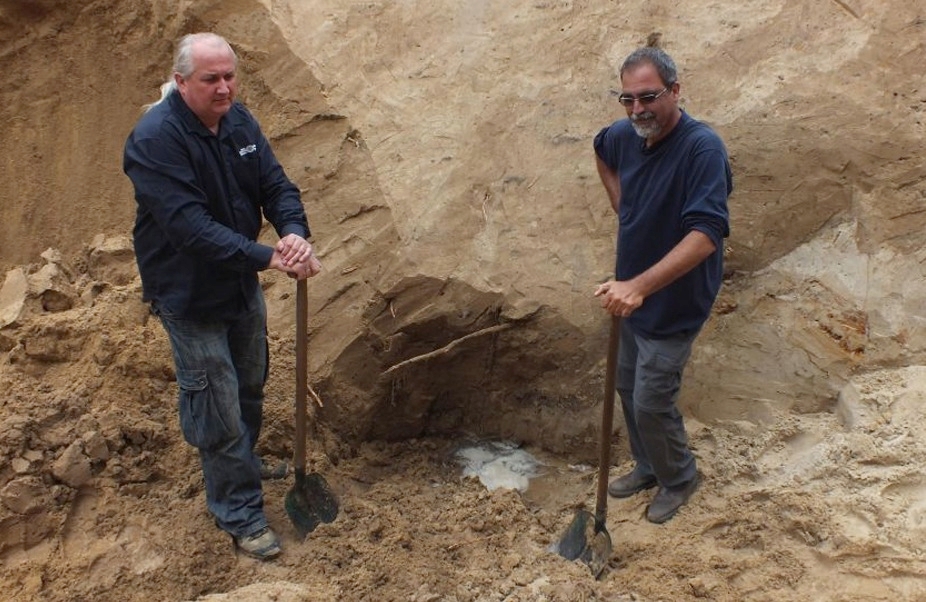 Israeli archaeologist Yoram Haimi, right, has been warning of threats to important historical artifacts at the Sobibor death camp in Poland.
Advertisement

SOBIBOR, Poland (JTA) — After he uncovered the path that two of his uncles followed to the gas chambers at Sobibor, Yoram Haimi thought the complex he had worked years to unearth would be preserved for posterity.

So when Polish authorities announced in 2011 that they would build a museum and monument inside the former death camp, Haimi, an archaeologist at Tel Aviv University, went on the offensive, warning that his excavations of structures long thought to have been destroyed by the Nazis were in peril.

Polish officials dismissed his objections and advanced the project, which had been approved by the Sobibor Steering Committee, an international forum that includes representatives from leading Israeli and European Holocaust institutions.

Now two of those institutions, including Yad Vashem, the Israeli Holocaust museum and research institute and an influential member of the Sobibor committee, are calling for the $5 million plan to be re-evaluated following another Haimi find — in September, he uncovered the remains of Sobibor’s gas chambers.

“The recent discovery of the remains of the gas chamber at Sobibor have added a dimension to the project which requires further discussion,” Yad Vashem spokeswoman Marisa Danson told JTA on Monday.

Danson said the Polish government, following an appeal by her organization, agreed last fall on the need for “further discussions and new decisions” regarding the project.” She said the relevant issues will be addressed before work is resumed.

Tomasz Kranz, director of the State Museum at Majdanek and the person responsible for the Sobibor project, downplayed the significance of Yad Vashem’s reservations and said it only pertained to the gas chamber area.

In 2013, the Sobibor Steering Committee announced that it had selected a design by four Polish architects for a museum to be built at Sobibor, where some 250,000 Jews were murdered and which is now an open field with a large monument covering a mound of ash from the crematoria.

The plan envisioned a mile-long wall along the path, discovered by Haimi, by which the Nazis led Jews to the gas chambers. The path was cynically named the Himmelfahrsstrasse, or “road to heaven.”

The wall would arch around to encircle Sobibor’s mass graves and finally run between the mound of ash to an area where contractors are now preparing to build the museum and visitors center.

Haimi says the wall will “run dangerously close to the mass graves” and that the museum’s parking lot will be paved on top of a wooden ramp discovered by his team, which believes it was used to offload new arrivals at the camp.

But Kranz insists the wall will not destroy any archaeological evidence and that the parking lot will not cover the ramp. Kranz and Polish Chief Rabbi Michael Schudrich maintain the project is under the supervision of rabbis who are responsible for ensuring it conforms to religious laws that forbid disturbing graves.

Nevertheless, the new findings have prompted several calls for a re-examination of the project.

“The work needs to be stopped temporarily at least, so we can examine the new findings and what they mean,” Frank van der Elst, a historian and board member of the Netherlands-based Sobibor Foundation, told JTA. 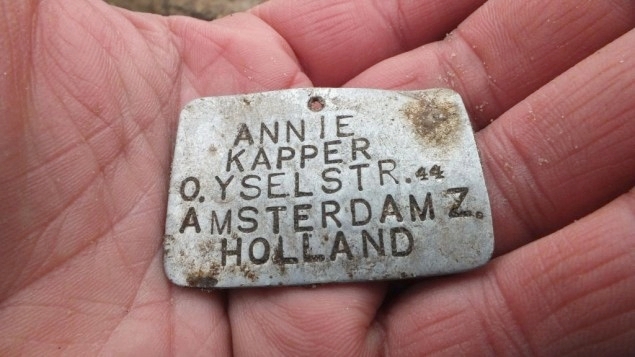 A metal plate bearing the name of 13-year-old Annie Kapper from Amsterdam was found at the Sobibor death camp in eastern Poland in 2013. (Courtesy of Yoram Haimi)

The Sobibor Foundation itself, which is also represented on the steering committee, has “certain reservations about the current design and is discussing them with Polish officials with the aim of reaching a consensus solution,” the foundation’s chairman, Maarten Eddes, told JTA.

The Netherlands has provided approximately $2.26 million for the project, Eddes said, split between the government and the Dutch National Fund for Peace, Liberty and Veterans.

Supporters of the project say it will not only draw attention to the scale of Nazi crimes, but also limit access to the mass graves, which are buried under a field where locals now cycle and picnic on sunny days.

Unlike better-known death camps such as Majdanek and Auschwitz, which have proper museums that protect sensitive historical artifacts, Sobibor is easily accessible. Only a single guard watches over the machinery being used to prepare the ground for construction.

“The walls will protect the site from anyone wishing to enter but draw their attention to it as well,” said Andrzej Kadluczka, chairman of the jury that in 2013 selected the project’s design from a field of 63 entrants.

Piotr Zuchowski, a Polish deputy minister and chairman of the Sobibor committee, has told Polish media that archaeologists will supervise the construction work to prevent loss, but Haimi says he fears the work will nonetheless destroy findings waiting to be uncovered. Haimi cites his team’s 2013 discovery of a metal plate bearing the name of 13-year-old Annie Kapper of Amsterdam, one of approximately 40,000 Dutch Jews murdered at Sobibor.

Haimi’s dig around the ramp led to the discovery of 15,000 objects belonging to victims.

“When you start bulldozing and pouring concrete, there is no way to save objects like that, which are littered all over and buried in the soil,” he said. “Construction also means we will never find the entrance to the Himmelfahrsstrasse.”

For those reasons, Haimi says, “building inside death camps is no longer done — not in Auschwitz, not anywhere.”

Jonny Daniels, the Israeli founder of the From the Depths commemoration group, said he recently appealed to the Conference of European Rabbis to ask that construction be halted to protect the dignity of the deceased.

But Schudrich maintains there is no Jewish ritual problem with the project because it is under rabbinic supervision. The issue of bone fragments found on the surface, the rabbi says, will be solved by covering them.