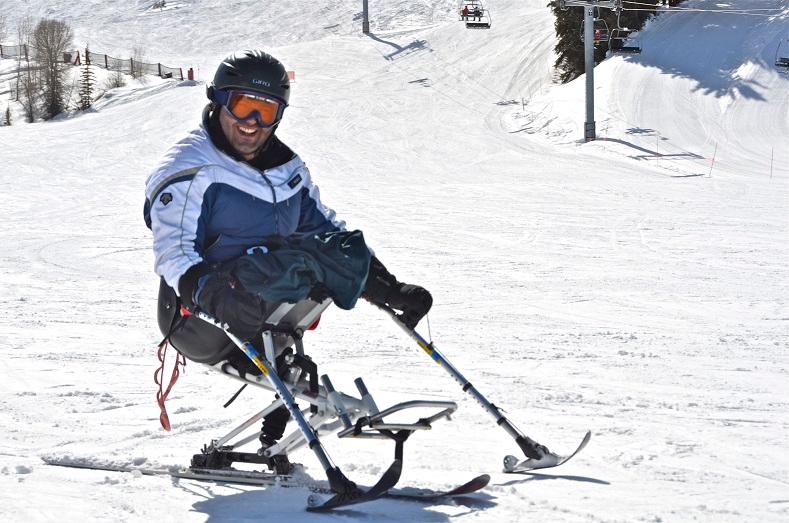 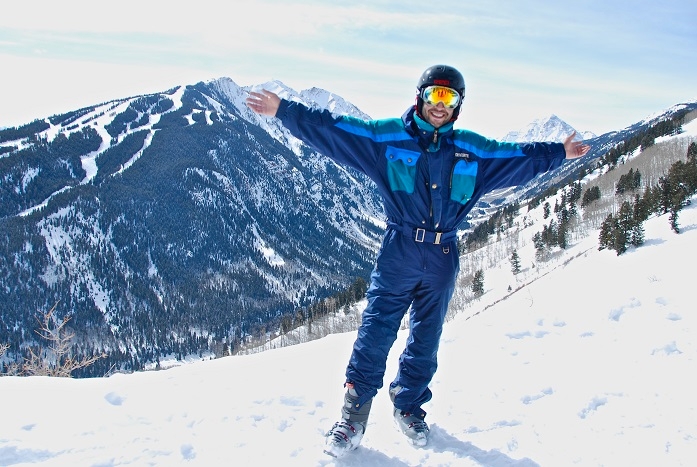 Israeli army veteran Yinon Cohen, 31, surprised his ski instructors at Challenge Aspen with his determination to ski unaided except for his prosthetic legs. (Nina Zale)

(JTA) — After Yinon Cohen lost his legs in an accident involving a rocket-propelled grenade, it wasn’t clear he’d ever be able to walk again, much less ski down a peak in the Rocky Mountains.

A fresh-faced soldier in the Israel Defense Forces’ elite Golani brigade, Cohen was in an advanced weapons training course in February 2003 when his sergeant inadvertently fired an RPG, an explosive weapon capable of piercing armored vehicles, straight into his legs.

Just moments before, Cohen had been nodding off, and his exasperated sergeant ordered him to stand for the remainder of the class. That ended up saving Cohen’s life. Had he been seated, Cohen would have been struck in the torso and almost certainly killed. Instead, he found himself dazed in the smoke-filled room, trying to piece together what was happening as soldiers around him panicked.

When he awoke a day later in the ICU unit of Rambam Medical Center in Haifa, a psychologist delivered the grim news: He had lost both legs below the knee. Cohen’s response was instinctive, he recalls. Looking at his parents’ tear-stained faces, he said, “Be thankful that I’m alive.”

Then his father recited the Kiddush — it was Friday evening — and they all cried.

Fast forward to 2014, and Cohen, a native of the Tel Aviv suburb of Petach Tikvah, found himself standing on a snowy mountain 8,000 miles away and more than 8,000 feet above sea level, insisting to his incredulous ski instructor that he didn’t need any special equipment other than his prosthetic legs to ski down.

It was Cohen’s first day on the slopes as part of Golshim L’Chaim-Ski to Live, a Colorado program that brings wounded Israeli veterans and victims of terrorism to Aspen to learn how to ski — and boost their spirits.

Now in its eighth year, Golshim is the brainchild of Aspen’s Chabad rabbi, Mendel Mintz. An avid skier himself who is on the snow about one day a week, Mintz got the idea for it from a program for wounded U.S. veterans whom he spotted one day on the slopes.

Golshim, which brings about a dozen Israelis each winter, is focused on skiing and physical activity. The group eats breakfast and dinner together at the Chabad center, and most nights local community members join the group for some kind of program or recreational activity. At a cost of about $5,000 per person, Golshim L’Chaim is supported by local donors, including the local Jewish federation, UJA Aspen Valley. The program is free for the Israeli participants.

“Imagine someone without legs coming here to ski and a week later skiing down Aspen,” Mintz told JTA. “They feel they can do anything after that. The local community gains more than we give. It’s truly inspirational.”

The logistics are daunting, starting from transporting the wounded Israelis from Israel over multiple flights. Some come with a spouse or sibling to assist in their care, and on the mountain each Israeli may be escorted by up to three or four instructors. Medications must be managed, doctors must be consulted and Golshim keeps oxygen on hand in case the altitude becomes difficult for the visitors.

For the ski instruction, Golshim L’Chaim hires Challenge Aspen, an organization that runs adaptive ski programs for people with physical and cognitive disabilities, including wounded U.S. soldiers. Many participants ski with specially equipped chairs, tethers and outriggers — poles with mini-skis on the bottoms.

“Our goal is to have the soldiers become as independent as possible,” said John Klonowski, director of Challenge Aspen’s military program and a veteran ski instructor with the Golshim L’Chaim groups.

“The learning curve is pretty quick. It doesn’t really matter if you’re in adaptive equipment,” he said. “We’ll get folks out on a ski hill, and they have an opportunity to feel like they’re just like everyone else. Especially for people in wheelchairs, this is one of very few opportunities to be out of the wheelchair. Once you’re out there, everybody’s doing the same thing — feeling the speed, the wind in their face, out in the great outdoors.”

When Cohen turned up his first day, the instructors presented him with a monoski, a chair connected by a shock to a fat ski.

“I said no, I’m doing it on my legs,” Cohen recalled. “They thought there was a language miscommunication. In the end I did it on the legs.”

Always athletic, Cohen had tried not to let his disabilities limit him. His initial rehab after the RPG explosion had lasted nearly a year. Because his knees were spared in the explosion, he was given prosthetics and slowly was able to learn to walk anew.

Cohen joined other Israelis on their post-army trips to the Far East and South America, though instead of trekking he rode horseback or on scooters. Back in Israel, he enrolled in Bar-Ilan University, studying criminology.

“Without strong faith in God, I couldn’t have gotten through it,” Cohen told JTA, noting that the part of his legs left intact were what had been covered by the tzitzit ritual fringes he wears every day. “You talk to the man upstairs and you know you’re not alone.”

But there were limitations. Cohen couldn’t run. He often found himself the subject of curious stares. And like many wounded veterans, he struggled at times to keep his spirits up.

At Aspen, Cohen says, his success skiing gave him a new boost.

“When I skied all the way down, I saw that anything is possible,” said Cohen, now 31. “I came back to Israel and it gave me strength to believe in myself. If I look at myself as handicapped, people will treat me that way. If I consider myself a healthy person, people will look at me that way.”

Ariela Alush, 37, who also was on the Golshim L’Chaim program last year, said her Aspen trip proved transformative for her.

Alush was vacationing with two friends in Egypt’s Sinai Peninsula in October 2004 when terrorists detonated a car bomb just a few feet from her bungalow. She suffered a spinal injury, a head fracture, a broken hand and shrapnel in her ear; one of her friends was killed.

After two years of ear surgeries and rehab, Alush eventually was given a clean bill of health. But she remained traumatized by her experience, disoriented and anxious. She was fearful of traveling overseas and never took vacations. After the bombing, she temporarily lost her sight, and she associated the idea of vacation with the darkness that had befallen her in Egypt.

“When you have post-traumatic stress disorder, you never feel safe. You’re always bothered by something,” Alush said. “But as soon as I got to Aspen I felt embraced by the Jewish community there. I felt like I was in a safe place. I experienced something primal. Just as in Sinai I had my first difficult, dark experience, Aspen was a good, positive experience of light.”

But when Alush tried skiing, her first bad fall triggered a flashback to the bombing in Egypt 10 years earlier. She couldn’t get up. Alush panicked. A ski patrol rescue team was called in to bring her down the mountain. For two days Alush sat disheartened, traumatized anew.

Then one of the program participants gave her a camera. Alush, a film student, perked up. She filmed the snow, the mountains, her friends on skis. Slowly, she says, she felt she was regaining control through the camera lens. Finally, she felt ready to try skiing again.

“I only skied for two days that week, and not even alone. But the therapeutic value of the experience was, in my eyes, worth everything,” Alush said. “In Aspen, something in my pace of life changed. I went back to Israel and I returned to work in a different way. I went back to working on my movie, I had ambition again. Something new had awakened in me.” 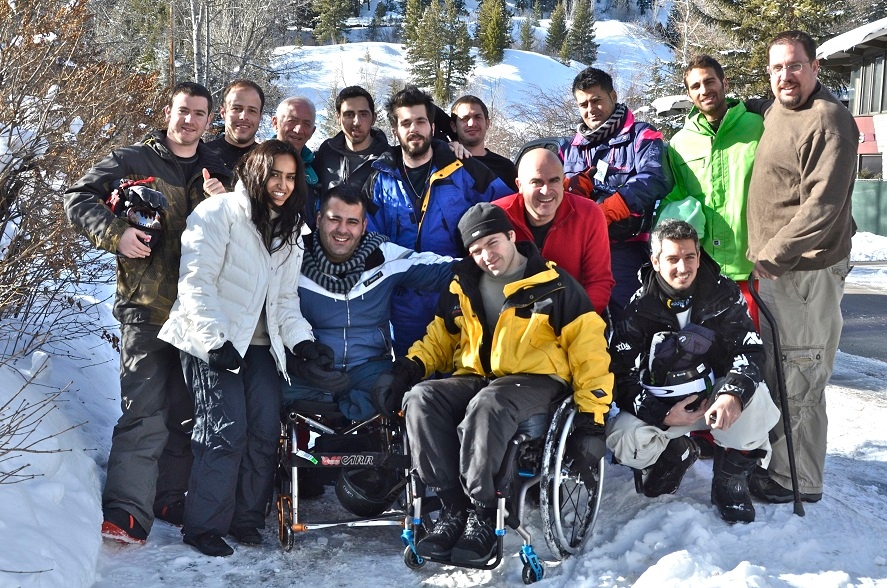 Golshim L’Chaim-Ski to Live brings about a dozen wounded Israeli veterans and terrorism victims to Aspen to learn how to ski each year. The 2015 program is slated to include veterans of the 2014 Gaza war. (Nina Zale)

For Cohen, the high at Aspen soon was followed by one of the worst lows since his accident.

After several years on artificial legs, his prostheses were worn out. Cohen wanted new prostheses that would allow him to be more athletic, but his Israeli doctors told him that because he had lost his legs in a violent explosion rather than a careful amputation, that wasn’t possible — at least not without additional risky surgery.

For the first time since his rehab, Cohen was confined to a wheelchair.

After months of research, Cohen found a New York outfit called A Step Ahead Prosthetics that said it could design him an advanced prosthetic. But it would cost $150,000 and Cohen couldn’t afford it.

When his new friends in Aspen heard about his predicament, they sprang into action, within weeks raising 80 percent of the cost. An Israeli nonprofit, Dror for the Wounded, which provides medical, psychological and financial assistance to wounded Israeli soldiers, donated the balance.

“Without Golshim L’Chaim it wouldn’t have happened,” Cohen said. “They said the whole time, ‘Don’t worry, we’ll get the money.’”

Cohen was fitted with his new prostheses late last summer.

This year’s Golshim L’Chaim program, scheduled for late February, will include several soldiers injured in last summer’s Gaza war, according to Mintz.

“When you see what these people have gone through and what they’re able to do, it’s mind-boggling,” Mintz said. “It puts life in perspective.”