Nazi drum made of Torah scroll brought from Poland to Israel 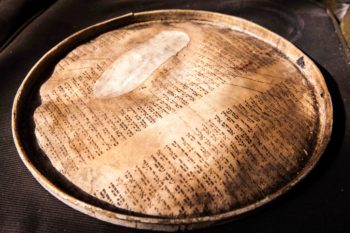 Part of the parchment used to make a drum that was used by a Hitler Youth member in Poland. (Courtesy of From the Depths)

(JTA) — A Holocaust commemoration group brought from Poland to Israel a drum that was made out of a Torah scroll and belonged to a Nazi sympathizer.

The drum was found last month by volunteers of the From The Depths organization in the basement of a man who lived in a village near the central Polish city of Lodz and whose estate was put on sale.

The volunteers came to the sale after hearing that the objects belonging to the man, a former member of the Nazi Hitler Youth movement, contained several that were connected to Jews.

Jonny Daniels, the Israeli founder of From The Depths, bought the drum and, after consulting with the Israeli Chief Rabbinate on how it should be treated in view of religious laws on handling Holy Scripture, decided to incorporate it into a traveling exhibition that the group is preparing this year.

Daniels said the segment of parchment that was used to make the drum is “incredibly well preserved.” It likely came from one of the many synagogues that serviced the area’s Jewish communities, which before the Holocaust had tens of thousands of members.

“During the war all the synagogues were destroyed and no one knew what happened to the Torah scrolls,” Daniels said. “After 70 years, the generations of survivors are leaving us too fast, now we become responsible to carry on this memory.”

The action was carried out in memory of the family of Joe Levkovitch — a Poland-born, 88-year-old Jewish man whose parents, among other relatives, were murdered at the Belzec death camp and who last July immigrated from Canada to Israel.