At Boston festival, shining light on disabilities through film 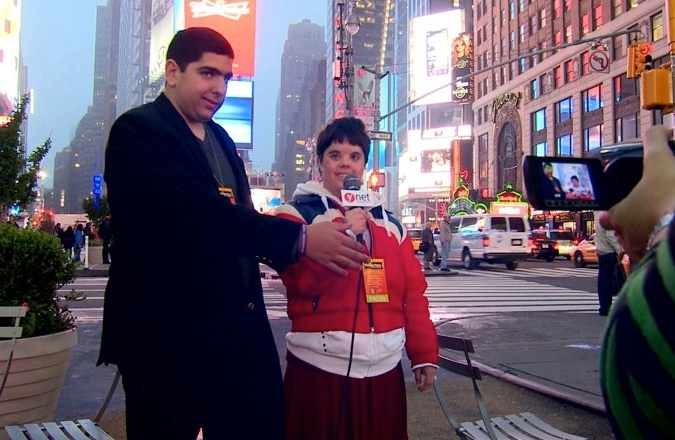 With this month’s observance of Jewish Disabilities Awareness Month, community groups across the country are discovering the power of film to shed light on the subject and defy stereotypes of people living with disabilities.

“Films are an accessible way to create community and to educate and entertain,” said Jaymie Saks, executive director of the Boston Jewish Film Festival.

The festival is now in its fourth year as a partner of the ReelAbilities Film Festival, which showcases films by and about people with a wide array of disabilities, physical and emotional. Launched in 2007 in New York, ReelAbilities promotes awareness and appreciation of the stories and artistic expressions of people with various disabilities. It also now serves as a national umbrella group for partner organizations in more than a dozen cities. Jewish philanthropies are key funders of the festival at the national and local levels.

Boston’s two-week festival kicks off Feb. and includes 26 films. Among the films showing exclusively in Boston is “Special Interview,” a charming Israeli documentary about the unlikely journey of Efrat Dotan and Matanel Bitton, two young journalists hot on the trail of their dream interview with President Barack Obama. Along the way, the pair rack up an impressive line of credits, posing direct, often tough questions in sit-down interviews with Israeli Prime Minister Benjamin Netanyahu, former president Shimon Peres and many other public figures.

Dotan, a 27-year-old woman with Down Syndrome, and Bitton, a 20-year-old with developmental delays, both participate in programs at Shalva: The Association for Mentally & Physically Challenged Children in Jerusalem, which initiated the project in partnership with the Israeli newspaper Yedioth Ahronot and Ynet, the paper’s online media outlet.

The film is more than a story about finding meaningful employment and scoring the great interview, according to Ellie Pierce, director of Boston’s ReelAbilities festival. Viewers see the budding relationship between Dotan and Bitton and wonder if they’re friends or if there’s an element of romance. “People might not otherwise think of that dimension of their lives,” Pierce noted.

Shalva itself is an unexpected star of the film. The innovative center was founded 25 years ago by Kalman Samuels and his wife, who raised a son with disabilities. From the beginning, it was open to all families without cost, he said. As the center has grown, it began to offer other services, like a respite care program that has become a model for others across the world. Samuels is due to appear at the Feb. 25 Boston screening.

In just the few years since “Special Interview” was broadcast nationwide in Israel, perceptions are changing, Samuels said, but it is always a problem, he acknowledged.

“We put a flashlight on it and are getting it out of dark corners,” Samuels told JTA.