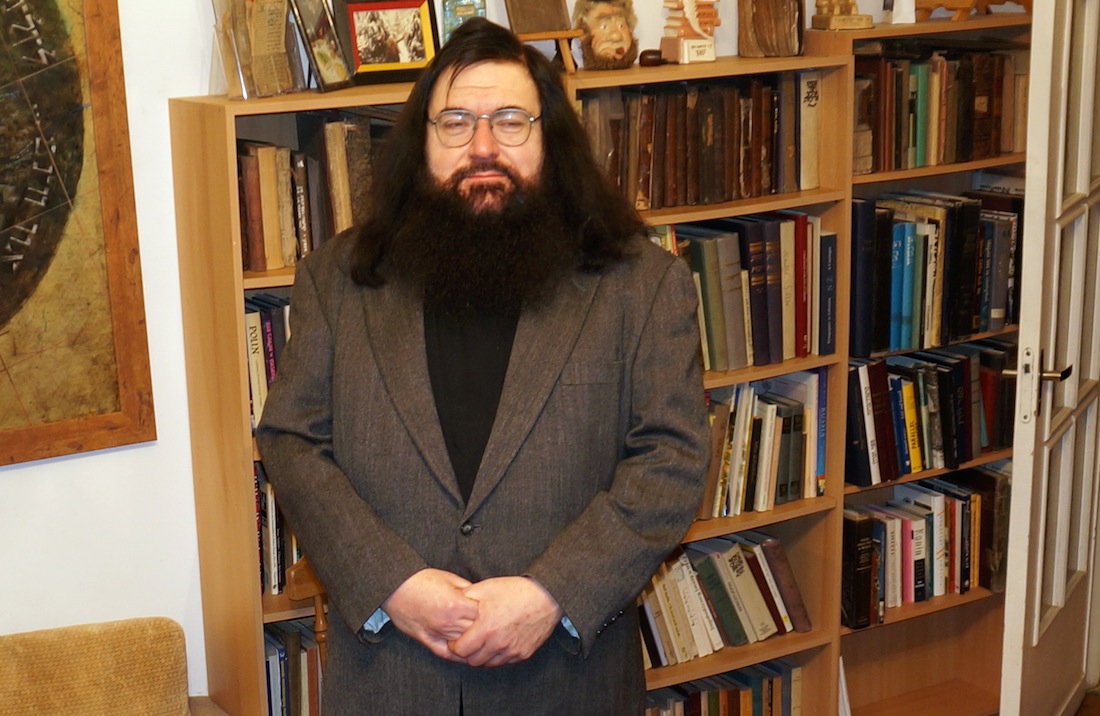 Dovid Katz has become a target of scorn for speaking out against ultra-nationalist groups in Lithuania. (Cnaan Liphshiz)
Advertisement

But at one of Europe’s more unusual neo-Nazi marches, complete with ultranationalists clad in medieval armor and smoke blowing in the colors of the Lithuanian flag, even he could blend in temporarily with the crowd.

Still, halfway through the Feb. 16 procession traversing Lithuania’s second largest city, Katz was spotted. One marcher walked up to him and blew a horn in his direction as others began chanting “Out with Katz.” Undeterred, he continued to flank the procession.

For Katz, 58, who moved to Lithuania in 1999 to take a professorship at Vilnius University, the incident was just the latest expression of hate he has endured since 2008, when he began to speak out against the country’s creeping legitimization of fascism.

“I came here in the euphoric post-independence years, when world peace was around the corner,” Katz said. “My own euphoria diminished with every neo-Nazi march after 2008 and attempt to justify and explain away the Holocaust, events that are becoming even more common and acceptable responses to Russian aggression.”

Lithuania has a long history of conflict with its Russian neighbor. The Museum of Genocide Victims in Vilnius, which until 2011 did not even mention the more than 200,000 Lithuanian Jews who died in the Nazi Holocaust, was established in 1992 to memorialize Lithuanians killed by the Nazi, but mostly Soviet, occupiers. 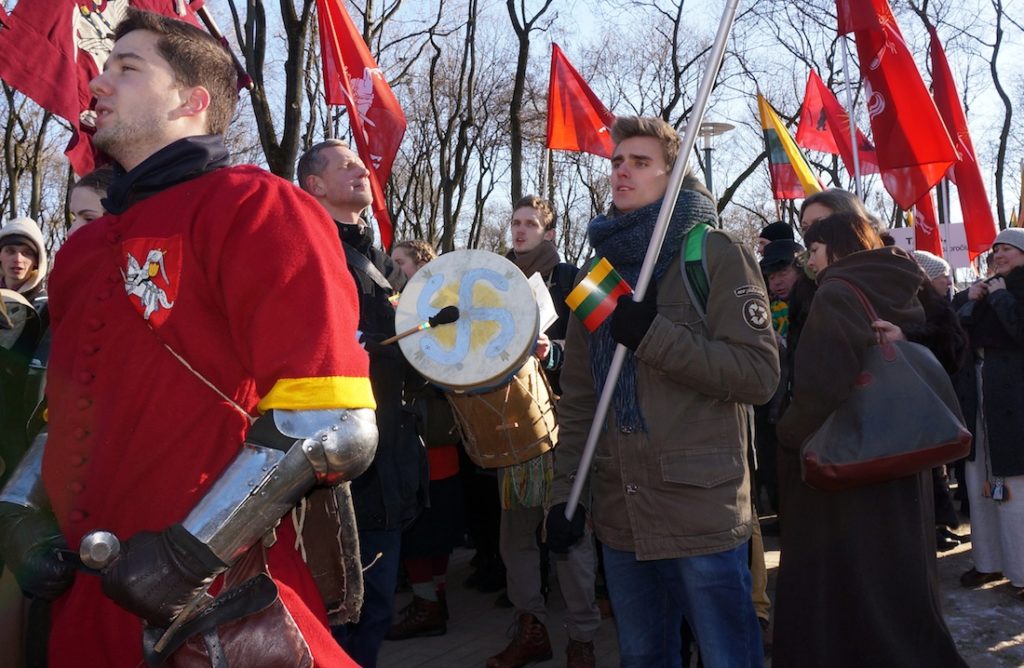 Lithuania is also one of the few countries where neo-Nazis are free to brandish swastikas on the street. Its northern neighbor, Latvia, is the only European country where veterans of the Waffen SS are allowed each year to march on main streets and commemorate their comrades, who are venerated as freedom fighters against Russia.

The Baltic nations, which have clashed frequently with Slavic peoples, share bitter memories from Soviet domination that have made them natural allies of Germany, according to Efraim Zuroff, a Nazi hunter and director of the Simon Wiesenthal Center’s Israel office. The historic conflict led thousands of Lithuanians and Latvians to volunteer for armed Nazi groups.

“Now, Russian expansionism under Vladimir Putin is serving as the perfect pretext to push forward a false historical account that accuses the Russians of genocide, and at the same time conveniently portrays the local Baltic populations as victims instead of perpetrators,” said Zuroff, who shadowed the Kaunas march with Katz.

Those tendencies were in plain sight at the Kaunas march, where dozens carried banners of Ukrainian nationalists alongside Nazi symbols. Tomas Skorupskis, a march organizer from the Lithuanian Nationalist Youth Union, said Russia’s invasion of Ukraine last year has helped swell the ranks of Lithuanian nationalists.

“Many Lithuanians find it hard to forgive Jews who, during communism, killed nationalist freedom fighters,” Skorupsis said. “But I think we should leave it in the past and look ahead.”

Since he began denouncing these phenomena, Katz, the author of numerous books in the field of Yiddish, lost his position at the Yiddish institute he founded at Vilnius University. He says it was political retribution, but his former bosses deny the claim.

Far-right activists often denounce Katz as a Russian agent. Some have published insulting caricatures of him and posted photographs of Katz at a cafe with a woman to the Facebook page of a far-right activist. Katz understands the latter move to be a reminder that he is being watched.

“I found out that anyone who will speak out against the legitimization of Nazism will be marginalized or threatened, or both,” said Katz, who now makes a living by lecturing internationally and from seminars in Vilnius for visiting groups from around the world. “Especially if they are single, a bit eccentric and of a certain weight and appearance.”

Katz is not the only anti-fascist activist complaining about persecution in the Baltics. In Latvia, authorities last year refused to renew the residency permit of Valery Engel, a Russian Jew with dual Israeli citizenship who lives in Riga with his Latvian wife and child. Earlier this month, Latvian officials considering his appeal to remain in the country demanded Engel prove that he informed Russian authorities of his Israeli citizenship.

“Since when does Latvia enforce Russia’s laws on nationality?” asked Joseph Koren, a Latvia-born Jew who with Engel runs the Latvian branch of the World Without Nazism group. “It’s an attempt to harass and to silence our opposition to the far right and the government’s support of it.”

Both Koren and Engel are mentioned several times in a 2013 report by the Latvia Security Police as having “played a great role in the discrediting campaign against Latvia” through actions “carried out in accordance with Russian foreign policy.”

To Koren, a businessmen who says he is routinely detained at Riga’s airport and lives under constant surveillance, this shows that Baltic nations “may have ended Soviet rule, but the Soviet techniques and mindset remain.” Katz’s case, Koren says, “is classic silencing in academia, just like in Soviet times.”

The Latvian Foreign Ministry did not respond to questions about Engel and Koren.

For his first nine years in Lithuania, Katz largely avoided speaking out about politics. That changed in 2008, when Lithuanian prosecutors began probing three Jews who were declared suspects of war crimes allegedly committed during World War II. The investigation was abandoned amid an international outcry that Katz helped generate by lobbying Western embassies and founding his website DefendingHistory.com. But it came at a price.

“I was thrust into the spotlight of political activism at the expense of my reputation as a scholar,” Katz said in an interview in his Vilnius apartment, which he shares with thousands of 19th-century Yiddish books that he rescued from across Eastern Europe. “I could no longer remain silent.”

Katz says he was warned by his bosses at the Yiddish institute to cease lobbying in defense of the three Jews — Yitzhak Arad, Fania Brantsovsky and Rachel Margolis — who had fought as partisans against the Nazis.

But the institute’s director, Sarunas Liekis, a member of the state’s commission on Nazi and Soviet crimes, denies Katz’s politics factored into the decision not to renew his contract.

Katz says he never missed a class during his time at the institute.