Copenhagen's main synagogue, where a guard was shot and killed Saturday(Wikimedia Commons)
Advertisement 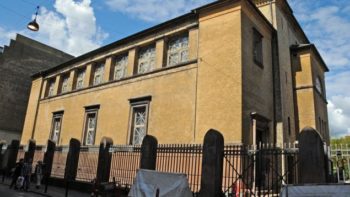 Copenhagen’s main synagogue, where a guard was shot and killed on Feb.14, 2015. (Wikimedia Commons)

The Pew Research Center’s annual study of global restrictions on religion, released Thursday, reported that approximately one-quarter of the world’s countries are “grappling with high levels of religious hostilities within their borders.”

Christians and Muslims, together making up more than half of the world’s population, faced harassment in the largest number of countries. However, the study noted a “marked increase in the number of countries where Jews were harassed.”

In the 77 countries in which Jews were harassed, Jews were “much more likely to be harassed by individuals or groups in society than by governments.”

As in the previous years of the study, social hostilities involving religion were highest across the Middle East and North Africa.

The study ranked 198 countries and territories by their levels of government restrictions on religion and social hostilities involving religion. The initial report was published in 2009.