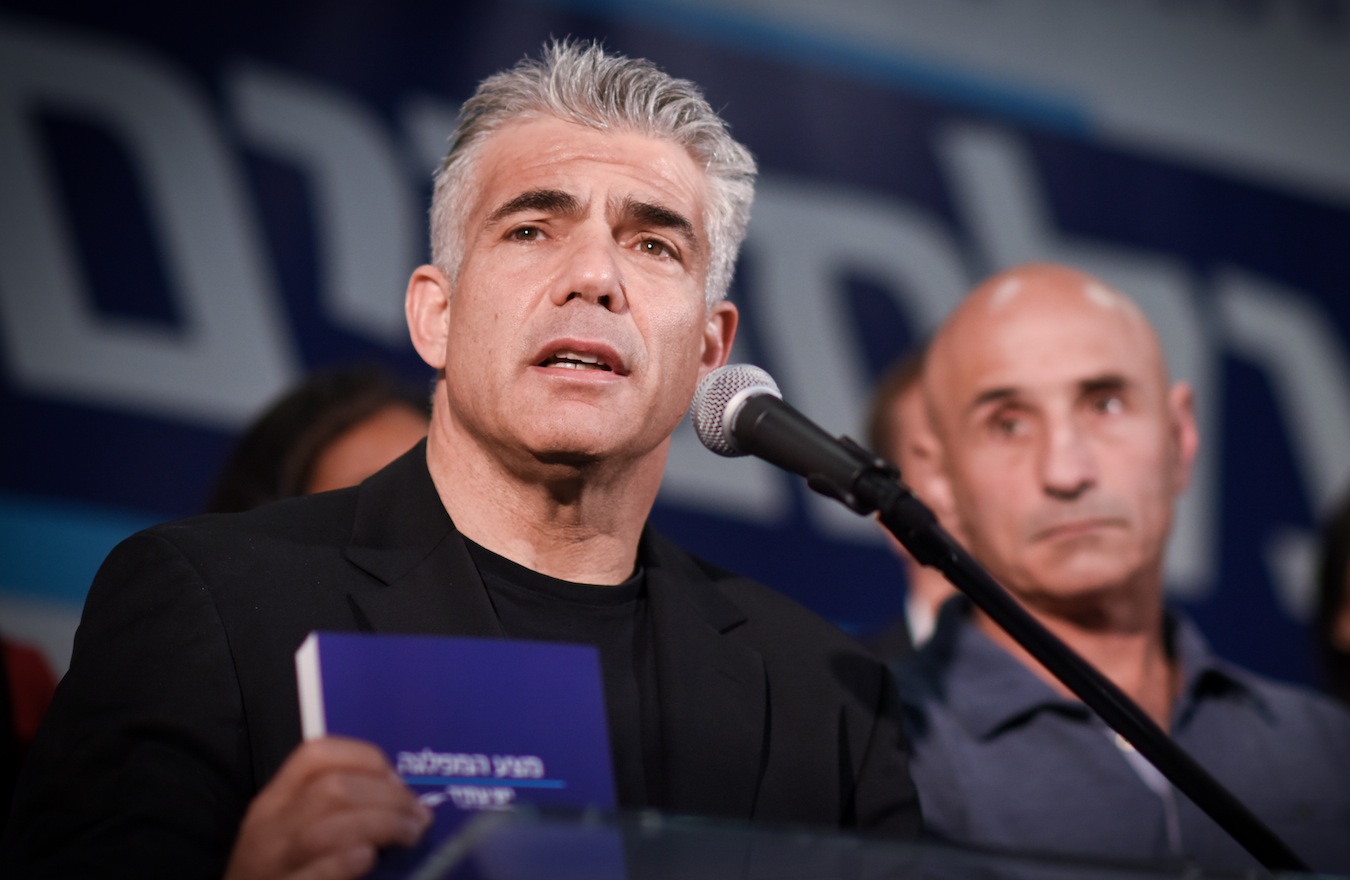 TEL AVIV (JTA) — The key word in Yair Lapid’s political vocabulary might be “but.”

His Yesh Atid party is not right-wing, he says, but it isn’t left-wing either. He wants to withdraw from the West Bank, but disavows both a unilateral pullout and bilateral Israeli-Palestinian negotiations. He wants Israel to allow civil unions, but would maintain the Orthodox Chief Rabbinate’s control over marriage.

And on Sunday, he wouldn’t directly criticize Prime Minister Benjamin Netanyahu’s upcoming speech to the U.S. Congress, but lamented that Israel wasn’t working with the White House to combat the Iranian nuclear program.

“Nobody is my natural partner,” Lapid told JTA on Sunday in an interview two weeks before Israel’s March 17 elections. “If there’s somebody close enough to my way of thinking and my ideology, I need not establish Yesh Atid. We are not in the right or the left, or the center-right or center-left. We are the center-center.”

Established only three years ago, Yesh Atid emerged to become the Knesset’s second-largest party in 2013 elections, presenting itself as a third-way alternative to the traditionally dominant Likud and Labor parties. Led by Lapid, a charismatic former television journalist, Yesh Atid’s challenge this year is to prove that a party built around personality and claiming to represent Israel’s shifting political center can have staying power.

A litany of other parties — including one led by Lapid’s father — have failed in the quest to create a third way in Israeli politics. Tommy Lapid won 15 seats with Shinui in 2003, only to lose them all in 2006. The centrist Kadima led the government for three years and was the Knesset’s largest party at the start of 2013; it no longer exists. Factions calling themselves The Center Party, Democratic Movement for Change, Third Way and others have all met the same end.

Despite these cautionary tales, Lapid has doubled down on his lack of a fixed right-left ideology.

Where other parties invested in short online videos, Yesh Atid put out a three-hour “anti-viral” ad explaining its platform. While other parties declared their intention to join a coalition led by Likud or the center-left Zionist Union, Lapid has refused to say. Meanwhile, another new centrist party, Kulanu, has captured the fresh-face momentum in this election and forced Lapid to run on his record. Current polls show Yesh Atid winning about a dozen seats in the next Knesset, enough to be the parliament’s third- or fourth-largest party.

“We are the people who believe life is more complicated than one sentence,” Lapid said. “We are the party of the neglected Israeli middle class.”

A former television news anchor, Lapid entered politics in advance of the January 2013 elections. In that campaign, he ran on a largely domestic platform of lowering the cost of living and expanding the mandatory military draft to include the haredi Orthodox.

Following the 2013 vote, Lapid became finance minister under Netanyahu, but his approval ratings plummeted after he raised taxes. Netanyahu fired him in December after their relationship soured.

On Sunday, Lapid called their coalition the “wrong government” to achieve everything he promised during the last campaign. Still, he defended his legislative accomplishments, including laws that required some haredi men to serve in the military and increased funding for Holocaust survivors.

“We have passed equality of burden, we have introduced math and English [education] to haredi youngsters, we have helped Holocaust survivors,” he said. “These all happened in this hostile environment. If you are determined and focused and on the mark, you can achieve a lot even if you were in the wrong government.”

“The thing is to be involved right now,” he said. “We’re not there, we are not at the table, not in a direct or indirect way. No one is talking to us, no one is listening to us.”

Despite his focus on domestic policy two years ago, Lapid has grown increasingly vocal — and increasingly left-leaning — on the peace process. Upon taking office, Lapid opposed a freeze on West Bank settlement construction to help jump-start peace talks with the Palestinians. On Sunday he called for a regional peace conference under whose auspices Israel would withdraw to its main West Bank settlement blocs as a first step toward a final peace accord. He did not rule out using the Saudi-backed Arab Peace Initiative as a basis.

Lapid has high hopes for this month’s election, though he’s noticeably more modest than before. After the 2013 vote, Lapid openly proclaimed his ambition to succeed Netanyahu as prime minister. Now his name doesn’t even appear in polls for the top job. Lapid’s objective now is less about convincing Israelis he has the mettle to be their leader than it is to prove he’s not simply a passing fad.

“The minute we started to work intensively, just explaining the things we did, they opened their eyes,” he said. “There’s always a second chance to make a first impression.”

CORRECTION: This article stated incorrectly that Yesh Atid was founded two years ago; it was three years ago.