NEW YORK (JTA) — Jewish perseverance, and more than a bit of chutzpah, lies at the heart of the Purim holiday we celebrate this week. It is one of the reasons we are instructed to mark this raucous holiday with boundless joy and why thousands of Ukrainian Jews, despite the odds they face, will join together across their country for Purim spiels and hamantaschen and to enjoy a much-needed respite from a conflict now simmering under a tenuous cease-fire.

These celebrations are but a momentary break from conditions facing thousands of Jews who remain in separatist controlled regions of Ukraine or who are internally displaced. 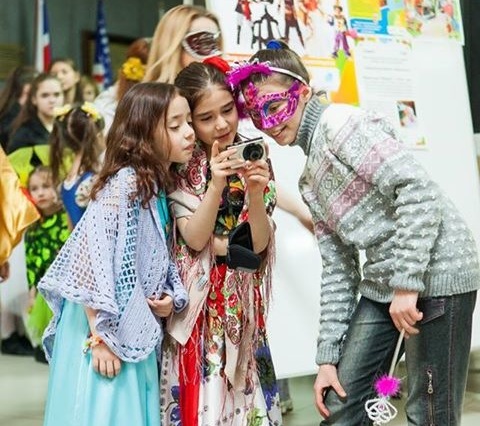 A celebration of the Purim holiday at the Jewish Community Center in Kharkiv, Ukraine. (JDC)

For the displaced — now living in cities around the country like Kiev, Dnepropetrovsk, Kharkiv, and Odessa – concern for food, housing, medical care and jobs are overwhelming. Making matters worse, many face discrimination from potential employers or landlords who suspect them of loyalty to the separatists or worry these refugees will return home when peace sets in. Many of the displaced, especially the children, suffer from post-traumatic stress.

For those who remain in the Luhansk and Donetsk areas, conflict-related unemployment and general economic distress compound the bite of spiking prices for increasingly scarce goods and widespread devastation to property and industry. The elderly, many of them homebound, are not receiving their meager pensions and are experiencing acute fear and worry. Working- or middle-class families, who were just getting by before the conflict, now find themselves desperately in need, suffering a total reversal of the proud economic advancement they enjoyed in previous years.

Since the crisis began last year, 2,700 people have been added to the 69,000 Jews in Ukraine whom the American Jewish Joint Distribution Committee already cared for through our network of Hesed social welfare centers. In January alone, 800 new people applied for aid. Our annual winter relief budget for Ukraine this year increased nearly sevenfold from the original planned budget, to $1.7 million.

These critical needs, worsened by a plummeting local currency and an economy near collapse, will not disappear any time soon. And all the work done by Jewish groups on the ground to date, while laudable, remains unfinished, whether or not the cease-fire agreed on last month continues to hold. We predict that millions of dollars in aid will be needed in the next six months to continue to provide the relief needed by thousands of Jews in distress.

Jewish aid to Ukraine — provided by local Jewish communities, Chabad, the International Fellowship of Christians and Jews, the Jewish federations, World Jewish Relief, the Claims Conference and my organization, the JDC — has paid for a wide range of emergency services. Among them, the provision of extra food, medicine and medical care; crisis-related home repairs; extra winter items such as warm bedding, clothing, utility stipends and space heaters; and a full aid package, including trauma services and emergency housing, for displaced Jews.

The beneficiaries of this assistance are members of Jewish communities revived after the fall of Communism. This week Jewish community institutions in Donetsk have been holding Purim activities for the beleaguered Jews that remain. In places like Kharkiv, displaced Jews are receiving gift baskets delivered by local Jewish volunteers.

But these Jewish communities, and our ability to provide ongoing aid to them, are strained after more than a year of crisis management and aid distribution. And if Bloomberg News’ recent ranking of Ukraine as the fourth most miserable economy in the world is any indication, we must redouble our efforts now to care for our people in Ukraine.

We must first educate and remind our Jewish communities about the challenges facing the Jews of Ukraine. And then we must put support in place to address current needs and ensure the future vitality of this community that has emerged from the ashes of history.

We have a track record of doing this together — in Argentina, when Jews faced economic ruin; in Europe, when the continent suffered through an enormous financial crisis; and today, in Ukraine, where war has given way to a humanitarian crisis of untold proportions.

So as we continue the legacy of Esther and Mordechai, of Jewish action in the face of insurmountable challenges, let us wish our Jewish brothers and sisters in Ukraine a hearty chag Purim sameach. May their brave resolve inspire our work on their behalf.

Alan H. Gill is the CEO of the American Jewish Joint Distribution Committee.