Who’s who in Israel’s election? 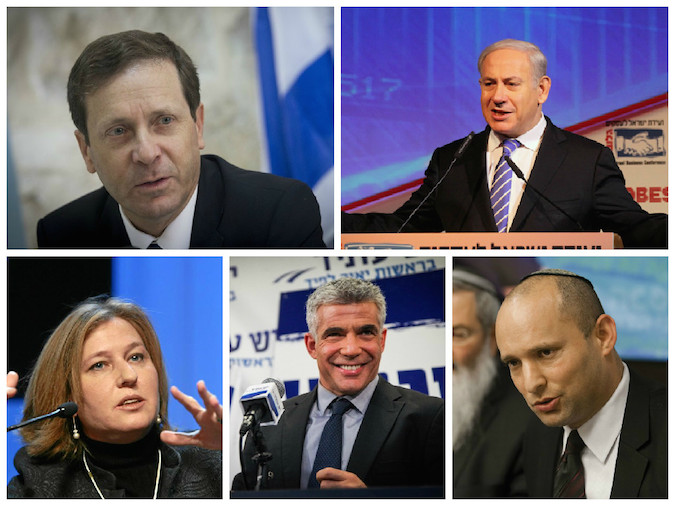 TEL AVIV (JTA) – When Israelis head to the polls for the March 17 elections, 26 parties will be vying for the Knesset’s 120 seats — including such fringe groups as the Pirate Party, which supports total government transparency and freedom of information on the Internet, and the Green Leaf party, which advocates marijuana legalization.

Fewer than a dozen, though, are likely to earn the 3.25 percent of the popular vote necessary to enter Knesset. They fall broadly into five major blocs.

Major parties: Israel’s biggest political bloc, the right wing or its offshoots have led Israel for the past 14 years. The flagship Likud favors a hawkish foreign policy and most of its lawmakers oppose Palestinian statehood. On economic policy, the party tacks conservative, promoting free markets, privatization of state industries and reduced regulation. Current polls show Likud running neck and neck atop the polls with the center-left Zionist Union, which stands the best chance of unseating current Prime Minister Benjamin Netanyahu.

To Likud’s right is Jewish Home, a religious pro-settler party that also favors free market reform. Historically a sectoral party representing Israel’s religious Zionist community, Jewish Home has successfully broadened its base in recent years by emphasizing its opposition to Palestinian statehood and its efforts to reduce Israel’s high cost of living. Jewish Home is predicted to come in fourth or fifth in the balloting.

People to watch: Benjamin Netanyahu, 65, the Likud chairman and current prime minister, is vying for his fourth term. Netanyahu’s campaign has emphasized his strong stance on defense issues and the dangers of a nuclear Iran, but he has drawn intense criticism for his controversial speech to Congress on that topic earlier this month. He has also been blamed in recent weeks for using excessive public funds on personal expenses like ice cream and alcohol. After negotiating for eight months with the Palestinian Authority last year, he has vowed in this campaign not to withdraw from the West Bank. First elected prime minister in 1996, Netanyahu won again in 2009 and was reelected to a third term in 2013.

Naftali Bennett, 42, Israel’s economy minister and chairman of Jewish Home, has touted his hawkish, free-market bona fides and recruited secular candidates to the party. A high-tech entrepreneur and past leader of the settlement movement, Bennett, 42, has starred in a range of goofy campaign ads, dressing up as a hipster and a nurse, and reading aloud a series of faux children’s novels about government policy.

Avigdor Liberman, 56, Yisrael Beiteinu’s chairman, is Israel’s foreign minister but may see his influence recede as his party’s Knesset representation shrinks. Liberman campaigned this year on pledges to include Umm al-Fahm, an Arab-Israeli city, in a future Palestinian state and to sentence terrorists to death.

Major parties: Israel’s flagship left-wing party, Labor, is resurgent this year after joining lists with the center-left Hatnuah to form the Zionist Union. The combined slate has emerged as Likud’s main competition, leading in most polls by a razor-thin margin. Zionist Union has run a largely negative campaign against Netanyahu while pledging to return Israel to Labor’s social-democratic ethos, pushing for a two-state solution and promising to improve Israel’s relations with the United States and Europe.

To the Zionist Union’s left is Meretz, which takes staunchly leftist positions on a range of issues, including Israeli-Palestinian peace, LGBT rights, separation of religion and state, and socialist economic policies. Meretz’s poll numbers have shrunk as Zionist Union’s have risen, but the party is still hovering above the electoral threshold.

People to watch: If Netanyahu loses, Israel’s next prime minister will almost certainly be Isaac Herzog, the co-chairman of Zionist Union. Herzog, 54, is a soft-spoken politician whose supporters tout his ability to build consensus. The son of Israel’s sixth president, Herzog, known by his nickname, “Bougie,” is a 12-year Knesset veteran and has served in a range of ministerial positions.

Tzipi Livni, 56, Herzog’s co-chairman, has shifted from right to center-left during a lengthy political career. Originally a senior official in Likud, Livni joined the centrist Kadima in 2005, where she served as foreign minister. She resigned from Kadima after losing its chairmanship, founding Hatnuah in 2012. In December, she merged Hatnuah with Labor and has continued her vocal advocacy of Israeli-Palestinian peace.

A rising star in Zionist Union is Stav Shaffir, 29, a firebrand first elected to the Knesset in 2013 after taking a leading role in Israel’s 2011 social protests. As a lawmaker, Shaffir has been an outspoken advocate of fiscal transparency. To her left is Zehava Galon, 59, Meretz’s chairwoman, a Russian immigrant who has been a leading supporter of civil liberties since she entered the Knesset in 1999.

Major parties: Israel’s most unpredictable political bloc, the center has two major parties. Yesh Atid, the current Knesset’s largest party, was founded ahead of the 2013 elections and passed landmark legislation mandating army service for some haredi Orthodox Israelis. The party has also pushed for a range of economic and religious reforms. In this campaign, Yesh Atid has focused on fighting corruption, reforms to help the middle class and Israeli withdrawal from the West Bank. Current polls predict Yesh Atid will finish third or fourth.

The fresh face in this election cycle is Kulanu, founded last year by former Likud minister Moshe Kachlon. The party has focused on economic reforms, pledging to increase competition in the housing and banking sectors. Despite the initial hype surrounding its creation, Kulanu has recently middled in the polls and is slated to receive about eight seats.

People to watch: Yair Lapid, 51, a former TV journalist and the head of Yesh Atid, entered the Knesset as a charismatic political neophyte in 2013. After two roller-coaster years as finance minister under Netanyahu, Lapid’s message this campaign is that he is a responsible politician with staying power who will continue his spate of reforms.

Kulanu Chairman Moshe Kachlon, 54, was formerly Netanyahu’s communications minister, but left Likud in 2013. As minister Kachlon, who grew up in a working-class home, engineered increased competition and lower prices in Israel’s cellular phone market. Fourth on his list is Michael Oren, Israel’s former ambassador to Washington and Kulanu’s point man on foreign policy. Oren will likely be the next Knesset’s only American-born member.

Major parties: The two main haredi parties are the Sephardic Shas and United Torah Judaism, a merger of several Ashkenazi haredi parties. Both parties have pledged to reinstate several policies benefiting haredim that were rolled back by Yesh Atid.

United Torah Judaism’s main issues are government support for yeshivas (including stipends for full-time students), continued haredi control of the Chief Rabbinate, social services for low-income haredim and the restoration of exemptions from military service for full-time yeshiva students.

Shas advocates more moderate versions of those policies as well as increased social services for poor families, many of whom are of Middle Eastern descent and vote for Shas even though they are not themselves haredi. Shas has seen its poll numbers decline following Eli Yishai’s departure and the 2013 death of Ovadia Yosef, the movement’s spiritual leader.

People to watch: Aryeh Deri, 56, Shas’ chairman, won 17 seats for the party in 1999 elections only to wind up in prison on bribery charges a year later. The charismatic Deri retook the helm of Shas following the 2013 elections and has focused his campaign on economic reforms to benefit poor families and fighting discrimination against Middle Eastern Jews.

Major parties: The three small Arab parties — the secular Balad, Arab-Jewish Communist Hadash and religious Ra’am-Ta’al — united ahead of this election into the Joint List, which favors increased efforts to combat anti-Arab discrimination, recognition of national rights for Israel’s Arab minority and the creation of a Palestinian state in the West Bank, Gaza and eastern Jerusalem.

Arab parties have never served in a coalition government and historically have been underrepresented as a proportion of the Arab-Israeli population, currently about one-fifth of the country. The party has pledged not to join the governing coalition, but the Joint List could become Israel’s third-largest party, which may allow it to lead the Knesset opposition.

People to watch: The Joint List’s chairman is Ayman Odeh, 40, an attorney who previously represented the Arab-Jewish left-wing Hadash party on the Haifa City Council. Odeh has said that along with protesting discrimination, he wants to constructively influence Israel’s economic, social and cultural legislation.

Two of the most outspoken Arab-Israeli members of Knesset have been lawmakers Ahmad Tibi, 56, a former adviser to Palestinian Authority President Yasser Arafat, and Hanin Zouabi, 45. Israel’s Central Elections Committee banned Zoabi from running in the elections due to accusations that she supports terrorism, but Israel’s Supreme Court overturned the ban. The party’s sole Jewish member is Dov Khenin, 57, a well-known leftist activist who in 2008 ran for mayor of Tel Aviv.