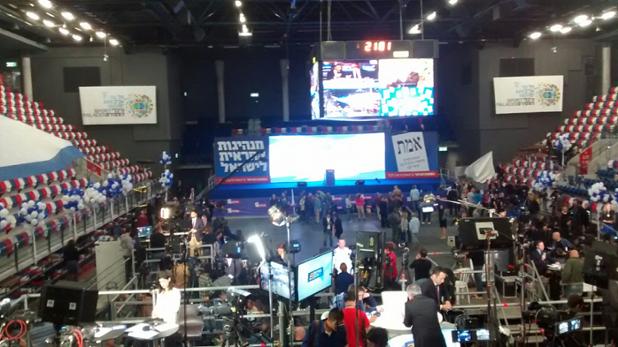 10:51: Jewish Home Chairman Naftali Bennett, whose party saw its representation in the next Knesset shrink from 12 to nine seats according to exit polls, struck an upbeat tone just now in a speech to party activists. Asked after the vote if he was sad about the results, Bennett told supporters that he responded: “The opposite. I am proud of religious Zionism.”

10:37: Exit polls showing Netanyahu and Herzog in a virtual tie, with each side taking about 27 votes.

9:30 p.m. Polls close, and we’ll know the result, in a half hour. Turnout as of 8 p.m., meanwhile, had shot up to 65.7 percent, nearly two percent higher than the 2013 figure and the highest since Labor won the election in 1999. Meanwhile, Zionist Union headquarters in Tel Aviv are filling up, with press ready to go. Here’s what it looked like a half hour ago.

Stay tuned for the exit polls! 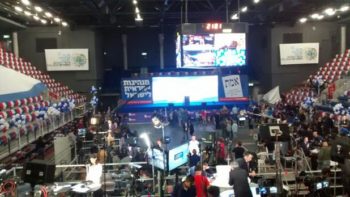 7:23 p.m. Hamas, that beacon of democracy and civil liberties, has waded into the Israeli election, calling on Palestinians to vote.

We call all Palestinians to vote, liberation is close! We will be celebrating the victory in al-quds~!

6:56 p.m. Quieter on the airwaves now, but here’s a turnout update. As of 6 p.m., 54.6 percent of Israelis had voted, about one percentage point lower than 2013 turnout at that hour. As I’ve noted, historically, that would bode well for the right. But Likud and Jewish Home have sounded the alarm on turnout today, so it’s possible the advantage is swinging in the other direction. Either way, we’ll know in about three hours, when polls close and exit poll results are released. Stay tuned!

6:14 p.m. In this election, voters aren’t just divided on right and left. They’re divided about whether to vote for a big, flagship party or a smaller ideologically purist faction. Read this story to meet the man singing Sephardi hymns to help Netanyahu win, and the woman who cast a vote for her young daughter to enter Knesset.

6:06 p.m. Netanyahu and Herzog aren’t the only ones feeling the urgency. Jewish Home chair Naftali Bennett in a video posted to Facebook: The left’s get out the vote campaign is huge, while “on the right there’s too much apathy. Voter turnout is low.” He urges voters to vote for him rather than centrist parties Yesh Atid and Kulanu.

5:54 p.m. Netanyahu and Herzog are scheduled to both make statements in the coming minutes. But the chair of the Central Elections Committee has barred both from broadcast. Updates coming here.

5:41 p.m. Some people think politicians act like animals during an election season. Well, here’s what happens when actual animals vote. This Times of Israel story shows why it’s all happening at the zoo, where visitors vote on the best animal. Is the era of lion-led government over??

5:09 p.m. Back after a reporting break! For those who were curious, here’s the video of Netanyahu urging his supporters to vote to counter “droves” of Arab-Israelis heading to the polls. 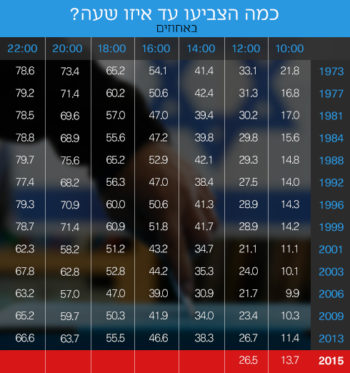 1:20 p.m. Controversy is brewing around a Likud statement that “Right-wing rule is in danger. Arab voters are going to the polling stations in droves.” The Jerusalem Post’s Lahav Harkov tweets that in response, the Joint List will stop reporting Arab turnout numbers so as not to draw right-wing voters in response.

Arab-Israeli MK Ahmad Tibi tweets in response that Netanyahu is scared, and calls on Arab voters to go to the polls to further cause him panic. “Change is at the door,” he writes.

12:40 p.m. Netanyahu has beaten Herzog… on Wikipedia. According to the Times of Israel, 53,630 have visited the Hebrew Wikipedia entry for the prime minister, versus 43,663 visits for his challenger’s page.

12:05 p.m. According to Times of Israel, quoting Israel Radio, Kachlon said he won’t recommend a prime minister “without sensitivity or compassion that for years did not listen to the public,  and the cost of housing has only risen more and more.” This is a jab at Netanyahu, who saw housing prices skyrocket during his term.

The statement comes after Likud used a recording of Kachlon for its campaign, and it could have huge implications. Kachlon hasn’t yet said whom he’d support for prime minister, and he’s expected to be the kingmaker between Netanyahu and Herzog.

11:54 a.m. Some of the most bizarre election graffiti out there. This says “Only Mashiach (messiah) saves the situation,” above pictures of party leaders atop plungers, with bleeding hearts. Spotted on Jerusalem’s central Jaffa St. 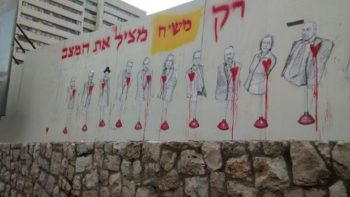 11:49 a.m. Likud has been fined about $5,000 for campaigning using a recording of Kulanu chair Moshe Kachlon praising Likud lawmakers, according to Israeli reports. Kachlon’s words were recorded when he was still a member of Likud.

11:45 a.m. Voting in Haifa, Arab-Israeli Joint List chairman Ayman Odeh says he’s excited “to become part of the history and turning point that will significantly change the reality of life of Arab and other citizens of the country,” according to the Times of Israel. Odeh has emphasized fighting discrimination and improving quality of life for Arab Israelis, and his party is expected to come in third today, behind Zionist Union and Likud.

11:30 a.m. According to Israeli reports, as of 10 a.m., voter turnout is 13.7 percent — the highest at that hour since 1999, when Labor unseated a Netanyahu government. Historically, high turnout has been good news for the left. And according to reporter Meirav Zonszein, as of 11:30 Arab voter turnout was at 10 percent, as opposed to 3 percent in 2013.

9:45 a.m. In Al Monitor, veteral Israeli journalist Ben Caspit writes that according to internal polls, Likud has erased the four-seat lead Zionist Union had in polls just a few days ago. Looks like Netanyahu’s interview circuit may have helped.

9:27 a.m. Michael Oren, who could be the only lawmaker born and raised in the U.S. to serve in the next Knesset, casts his ballot, presumably for his party, the centrist Kulanu. Here’s our profile of Oren from the campaign. 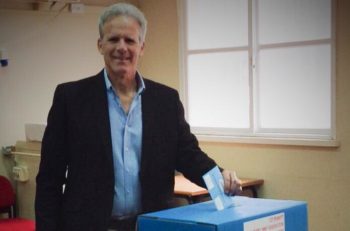 9:10 a.m. Party leaders cast their votes. Here’s what they had to say about what they want the next government to look like, according to Haaretz:

Netanyahu pledges to form “a government led by the nationalist camp. There will be no unity government with the left led by Labor.”

Yair Lapid, chair of Yesh Atid: “We are here hoping that at the end of the day, we won’t have a government of Bibi, Bougie and the Haredim, that will sell out all of Israel’s assets.” (Bibi and Bougie are Netanyahu and Herzog’s nicknames, respectively.)

Moshe Kachlon, chair of the centrist Kulanu party: “Today is the first time that I’m not voting Likud, but I’m doing it with a whole heart. We feel great, we reached our peak at the right time, and I’m sure the results will surprise everyone.”

9:00 a.m. In honor of the elections, Google has a special doodle for Israel.

8:34 a.m These guys have been at this central Tel Aviv intersection for the past week or so, trying to get out the center-left vote for an organization called V15, which wants to unseat Netanyahu. Today is crunch time for them. 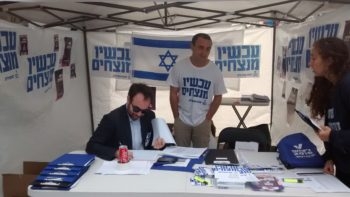 8:15 a.m. Outside my polling place, there are signs and volunteers for Zionist Union, Yesh Atid and Meretz, all on the center-left side of the political map. Here’s what an Israeli ballot looks like, with all of the possible parties. 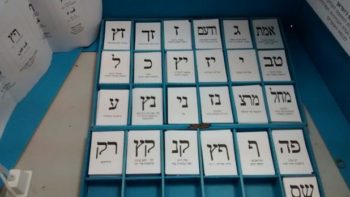 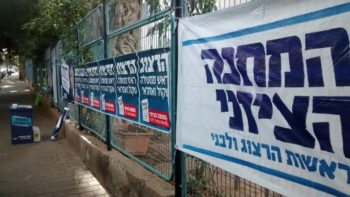 7:25 a.m. Here’s a quick review of where we are: Prime Minister Benjamin Netanyahu’s Likud is trailing its center-left challenger, the Zionist Union, led by Isaac Herzog. But in total, the left- and right-wing parties are polling neck-and-neck with each other, making the election too close to call. The Arab-Israeli Joint List is expected to come in third, with the centrist Yesh Atid and religious Zionist, pro-settler Jewish Home following.

6:50 a.m. Happy Israeli Election Day! JTA Israel correspondent Ben Sales will be live-blogging Israel’s 2015 vote, from when polls open at 7 a.m. to when balloting ends at 10:00 p.m. Get all the updates here and on his Twitter feed, @benjaminsales.