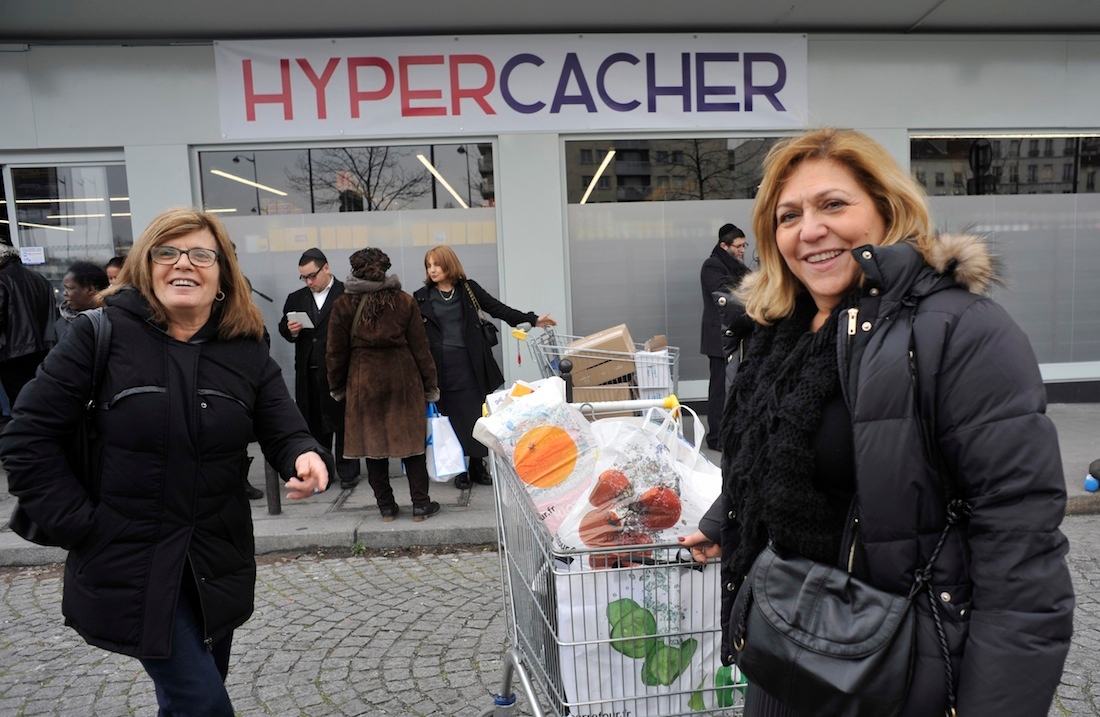 Shoppers outside the Hyper Cacher market near Paris, where four people were murdered in January. The shop reopened on March 15, 2015. (Serge Attal/Flash90)
Advertisement

PARIS (JTA) — A burst of applause greeted Holocaust survivor Marek Halter and his close friend, Imam Hassen Chalghoumi, as they entered the Synagogue de la Victoire together in January.

Halter, a celebrated author and friend of French Prime Minister Manuel Valls, is known for his outreach to moderate Muslims, and his appearance with Chalghoumi at the packed synagogue on Jan. 11 was seen as a hopeful sign after the murder of four Jews two days earlier at a kosher supermarket near the capital.

As the rising tide of anti-Semitic violence in France has led to record levels of immigration to Israel, Halter has emerged as a leading voice urging French Jews not to flee. In January, he published a 63-page manifesto, titled “Reconcile Amongst Yourselves,” that urged French Muslims and Jews to work together to make France a more tolerant place for minorities.

French Jews should “stay and fight for their place in society instead of packing their bags and leaving in the face of adversity,” Halter told JTA. 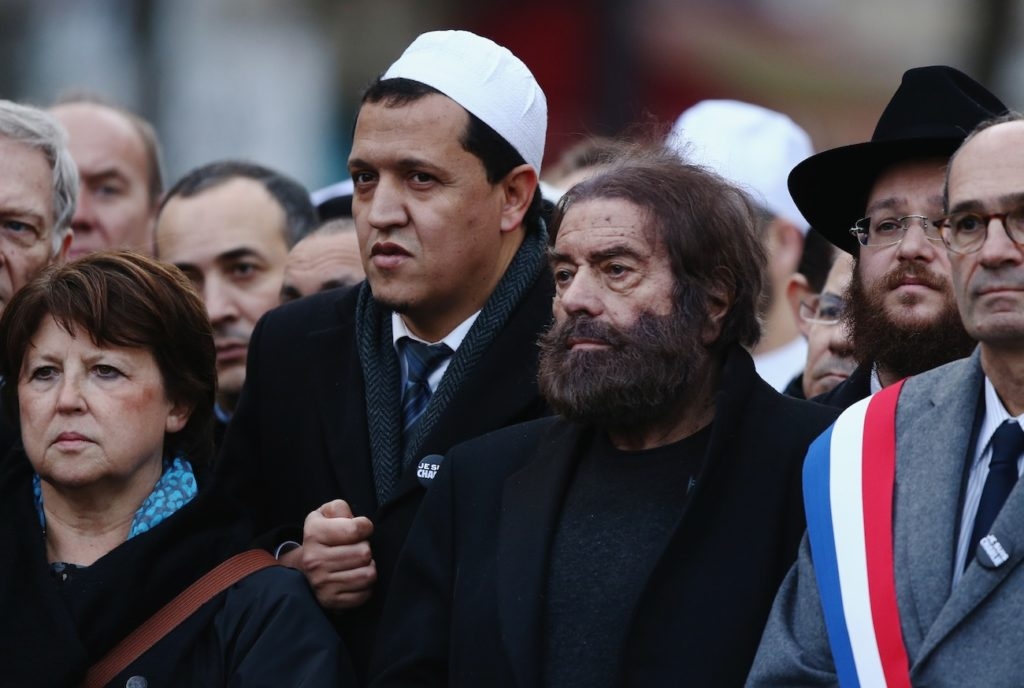 Marek Halter, second from right, and Hassen Chalghoumi, in white cap, at a mass rally in Paris following the shootings at the Charlie Hebdo magazine and the Hyper Cacher supermarket, Jan. 11, 2015. (Dan Kitwood/Getty Images)

Halter is among the most prominent French Jews to urge his coreligionists to stick it out in France, but his campaign is exposing tensions between integration-minded progressives — many of them Ashkenazi, like himself — and a more insular Sephardic majority that favors aliyah.

Sephardic Jews are believed to constitute a disproportionate number of French immigrants to Israel — 80-90 percent, according to Sergio DellaPergola, a sociologist at Hebrew University and one of the world’s foremost experts on Jewish demography. Overall, Sephardim represent about two-thirds of French Jewry.

The overrepresentation of Sephardim, according to DellaPergola, owes to “traumas that many North African Sephardim who settled in France after the 1950s brought with them, from living in Muslim societies where many enjoyed a peaceful coexistence, but where many others were beaten and discriminated against.”

Violent anti-Semitism “brings back very unpleasant memories for Sephardic Jews, who already have a higher propensity to make aliyah also out of religious sentiment as they come from more traditionalist societies,” DellaPergola said.

Last year, 7,231 French Jews moved to Israel, a record-setting figure nearly three times the number who came in 2012 and which made France the world’s largest source of new Israeli immigrants. After the supermarket killings and the murder of a volunteer security guard outside a synagogue in Denmark, Israeli Prime Minister Benjamin Netanyahu announced that Israel was preparing for massive immigration and urged European Jews to consider the Jewish state their home. Some officials at the Jewish Agency, the semi-official body that coordinates global aliyah, expect as many as 15,000 Jews to arrive from France this year.

Following the attack at the Hyper Cacher market, Halter’s call for French Jews to stick to their proverbial guns was joined by other members of the French Jewish elite, including the philosopher Bernard-Henri Levy and French Chief Rabbi Haim Korsia, who during the same meeting at Synagogue de la Victoire said, “Aliyah should never be the result of fear, only of an internal calling.”

But Siona, a group representing Sephardic French Jews, responded forcefully to a reproachful Halter Op-Ed published in Le Monde last year urging Jews not to abandon their country to jihadists and the far-right National Front party.

“Instead of advising French Jews on a reality he does not know, Marek Halter should devote himself to the international salons he attends and the world greats he meets,” Siona’s president, Roger Pinto, said in a statement that seemed to underline widely held perceptions of a disconnect between the French Jewish elite and its rank and file.

The discourse reflects a “growing split in the different attitudes to aliyah — not so much between Sephardim and Ashkenazim, but between a traditionalist majority where Sephardim constitute a strong element, and a secularist elite that has some prominent Ashkenazim, but also Sephardim,” said Karin Amit, an expert on French Jewry at the Ruppin Academic Center in Israel.

Hundreds of thousands of North African Jews immigrated to France in the 1950s, along with millions of Muslims. Replenishing the ranks of a community that lost a third of its members in the Holocaust, the newcomers inherited the community’s leadership from a declining population of Eastern European Jews. Current aliyah trends may return the leadership mantle to more secular and more assimilated Jews, DellaPergola said.

Among those determined to stay is Gilles Goldberg, an Ashkenazi businessman from the affluent suburb of St. Mande and one of those who applauded Halter at the synagogue on Jan. 11.

“Halter speaks for me because I agree that the current problems mean we need to work harder than ever on a solution,” Goldberg said. “But some of my friends, especially Sephardim, turn inward or to Israel for the answer.”

One of those friends is Serge Perez, who was born in Algeria and left after the start of the country’s civil war in the 1950s. Perez now lives in Paris, in a poor and heavily Muslim part of the city that provided some 40 percent of Jewish immigration from the Paris region.

“Some give French Muslims and society the benefit of the doubt,” Perez told JTA at the synagogue. “But I have no doubt: French society gave up its Jews once and will again. And the Muslims, if they’re a majority where I live, I will live elsewhere.”